Exploring the impact of new studies led by faculty members of the Rudi E. Scheidt School of Music and the Department of Communication & Film 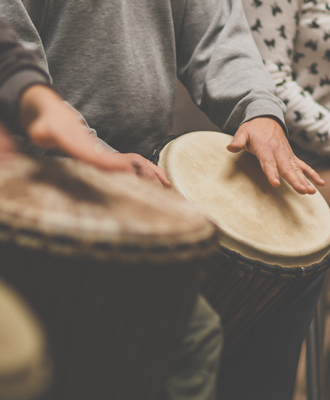 With the establishment of the Institute for Arts & Health in 2020, The University of Memphis has moved a step closer in its research-driven mission to bridge the arts, humanities, social sciences, digital technologies, and STEM areas. The overarching goal of the Institute for Arts & Health is to contribute to a more diverse and equitable society by incubating and seeking funding for transdisciplinary research and community engagement broadly related to the arts and health.

“I am so excited to share with you some of the exciting research that is happening at our new Institute for Arts & Health at The University of Memphis,” says CCFA Dean Anne Hogan. “It is through projects like this that we will gain a greater understanding of successful methods associated with health in artists and techniques for well-being."

The following story is just one of many exciting research projects currently happening under the banner of the Institute for Arts & Health.

Call it stage fright, performance anxiety, butterflies, or the jitters: the bane of the performing artists goes by many names, but the symptoms tend to manifest in the usual ways: tremors, dry mouth, sweaty palms or even a complete launch into fight-or-flight mode.

A recent UofM study led by a collaboration of experts including Dr. Ryan Fisher, Associate Dean of the College of Communication and Fine Arts; Dr. Sean Holden, research analyst with the Office of Institutional Research and Dr. Robyn Jones, associate professor of music with the Rudi E. Scheidt School of Music hopes to address and ease this dreaded and often very sudden manifestation of stress using natural and long-lasting mindfulness techniques.

Some of the newest innovations in Arts & Health at The University of Memphis come from a study on the applications of Koru Mindfulness, an evidence-based meditation practice designed for college-age students that is geared toward teaching mindfulness and meditation to manage stress and reduce anxiety. Mindfulness is a therapeutic technique focused on using one’s own emotional awareness as a way to reduce stress.

“A lot of the specifics behind the practice were formed based around college students, from the length and size of the classes to the order our meditations are introduced in,” Jones says, citing similar research at Duke University and an interest from former Rudi E. Scheidt School of Music associate professor Kyle Ferrell as an early inspiration for bringing the program to The University of Memphis. “Koru Mindfulness basically serves as an introduction to mindfulness and meditation, something easy for our students to pick up."

Koru Mindfulness training is comprised of four weeks of one-hour classes of 10-12 people. Various techniques are learned and applied, after which participants share their experiences in a discussion segment. Training is backed by a teacher-accessible mobile app that contains instructions for all guided meditations, as well as a log to keep track of individual sessions. Following success at the college level, the Koru Mindfulness model is now being used to teach all ages.

“That’s the thing that’s really good about this,” Jones says. “It’s all about building the habit. They know that their instructor will be checking their log throughout the week, which adds motivation. After they’ve done it for at least 30 days, it usually becomes a habit that is continued long term. It’s definitely a lifelong practice.”

For Jones, the goal of the practice is to increase mindfulness and become aware of your own thoughts as a way to cope with stressful situations.

“When you’re sitting there silently not focusing on anything else, you’re forced to be aware of your thoughts,” she says. “Once you become aware of them, you must practice letting them go. It is a constant, cyclical process guided by anchor points and breathing practices, which gives the mind something to attach to.”

One example Jones gave relates to a form of walking meditation that focuses on the sensation of feet touching the ground as an anchor point.

Koru Mindfulness research within the College of Communication and Fine Arts began in fall of 2021 when a pilot study was implemented to examine performance anxiety in students at the School of Music, with a primary focus on Jones’ own clarinet studio students.

Jones led the initial meditation sessions and training for members of her studio in hopes of addressing and curbing pre-performance panic attacks, as well as discouraging unhealthy coping mechanisms such as self-medication through drugs and alcohol.

“Especially in commercial music, you often hear stories of musicians who might feel like they need to drink or smoke excessively to reduce anxiety and go onstage,” Fisher says. “But performance anxiety permeates the culture and is also something that is prevalent in the classical music field, as well.”

Initial findings of the study reported a reduction in self-reported depression scores and perceived stress, reduced fear of negative attention, and an overall substantial decrease in music performance anxiety between the pre-test and post-treatment.

With hopeful results from the initial study, the team pivoted and used the same measures to observe orchestral musicians from the Memphis Symphony Orchestra in an effort funded by a Communities of Research Scholars (CoRS) grant by the UofM Division of Research and Innovation. In that study, music performance anxiety decreased in both the control group and experimental group and suggested long-term emotional wellness benefits for practicing musicians.

“What was interesting there was that we measured them before and after the treatment, but the experimental group was also measured one month after the post-test,” Fisher says. “That is where we saw the most significant decrease in some of these measures, especially when it comes to music performance anxiety.”

For Jones, Fisher and Holden, that seemed to indicate that Koru Mindfulness treatment does seem to have some degree of immediate impact on performance anxiety, but seems to work even better as these habits and behaviors are developed after months of regular use.

“Anecdotally, I overheard students from my own choir who I knew were participating in this study, although I couldn’t speak to them about it,” Fisher says. “They were talking to each other and sharing some of the mindfulness practices they had been developing before class. Some days I could tell they were stressed and I could see them close their eyes and it was obvious that they were applying what they had learned. It’s really cool from the standpoint of a professor running a research study where I’m not allowed to talk about what’s happening to see some of these methods in action, even in people who weren’t part of the study.”

A further study by Dr. Joy Goldsmith, professor of communication studies with the Department of Communication & Film, implemented components of treatment and some of the dependent measures the work done by Jones, Fisher and Holden, but pivots into a different sample population.

“We wanted to work together on a study that I thought that would be a great avenue to connect our worlds,” Fisher says.

Goldsmith’s study centered around resources for family oncology caregivers, an area of study that she has made her own following her sister Janet’s bout with a rare form of cancer. Goldsmith, who has her own performing arts background as a former theatre major prior to shifting to the field of health communication after serving as a caregiver for her sister for nine months, saw an opportunity for synergy.

“What a cool thing for us to have this transdisciplinary opportunity across the college,” Goldsmith says. “Our worlds have a lot in common, in addition to our shared skillsets. Oncology has always been my wheelhouse, with some prior work I had done focused on caregivers that has been tested already, so we were very keen on a pilot project with well-tested components. It turned out to be a great benefit to The University and our own departments’ research programs.”

Goldsmith’s study, titled “Teaching Self Care to the Oncology Family Caregiver with a Transdisciplinary Telehealth Treatment Program,” is centered around three important aspects: Koru Mindfulness training, therapeutic drumming sessions for oncology caregivers through workshops led by former UofM professor Dr. Frank Schaffer and specific training through health literacy resources specifically built for family caregivers. For Goldsmith and Co., this line of research is all about finding and providing the right tools to support with the right population.

“We are attempting to work together to mesh these seemingly very different components to form a kind of non-medicinal component that can lead to visible reductions in stress and anxiety in different populations,” says Fisher. “The drumming therapy sessions are not about performing. It’s, really, oftentimes a nonverbal way to communicate what an individual is dealing with through the drum, which can be a really healthy way to convey frustration, anger and all the various emotions that caregivers are often discouraged from displaying openly. Among other benefits, we hope these kinds of practices can provide that outlet.”