COMM Study with Us 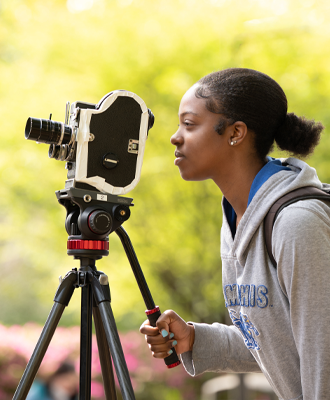 A new group of graduate film faculty is reenergizing the award-winning film curriculum of the Department of Communication and Film following the retirement of two beloved longtime faculty members.

With an emphasis on innovative forms of storytelling, the trio of David Goodman and new UofM hires Dr. Elja Roy and Marty Lang now lead the filmmaking side of the department to new horizons following the recent retirement of a pair of department stalwarts, in David Appleby and Steven Ross, both of whom are now recognized as professors emeriti.

“The faculty who have retired have done an incredible job in leading the department to where it is now, as well as helping to make some of the recent hires we have made to fill the gaps,” says Dr. Wendy Atkins-Sayre, chair and professor of rhetoric and media studies with the Department of Communication and Film. “Their contributions have been really important to get us to this point and they’re still involved in some ways. David and Steve still make visits to campus while working on their own projects and mentoring faculty and students. It’s great that they’re still available to participate in some ways and help build this new phase of the program.”

Ross and Appleby both underwent their respective retirements in 2020 and 2021 after more than 30 years of teaching at UofM. Lang and Roy joined the faculty of the Department of Communication and Film in 2020 and 2021, while Goodman has taught film and video production for the past four years.

“David Goodman was once a student here, as well, so he brings with him both years of experience from being a faculty member, as well as that of a former student,” Atkins-Sayre says. “I think that combination really sets him up well for leadership within the department.”

Goodman’s latest project, titled “A Ballet Season,” is a feature-length documentary film created alongside Ross that covers Ballet Memphis’ last full season before the COVID-19 pandemic. After securing permission from Ballet Memphis to create a totally independent film, the filmmakers showed up repeatedly over the course of more than a year to shoot upwards of 80 hours of footage. The film covered the production process of traditional ballets like “The Nutcracker” and more modern shows dealing with timely themes and subjects. It also chronicles the unexpected, including injuries, and the retirements of the company’s unofficial prima ballerina, Crystal Brothers, and Ballet Memphis CEO and Founding Artistic Director Dorothy Gunther Pugh.

“Since I make documentary films myself, it’s definitely the practice that I choose to bring with me into the classroom,” says Goodman, who specializes in camera-based work such as filming and editing. “The work springs from the camera, and that is where I spend most of my time.”

New hires can bring a new energy to any given department, especially one as varied as communication and film.

“It’s great to have a new team here to help forge ahead,” Goodman says. “It’s exciting to be back in the classroom and we’re all really looking forward to the future. Bringing in Marty Lang and Elja Roy has brought a new level of energy and creativity to what we do.”

Roy, a seasoned documentary filmmaker who has also worked on music videos and short films, was recently recognized by the Communication Division of the Association for Education in Journalism and Mass Communication (AEJMC) in the Creative Research Competition for her new film, “Musical Mangrove,” a documentary about efforts to save the world’s largest mangrove forest, the Sundarbans, which is shared between India and Bangladesh. The film showcases the artists and musicians of both countries as they work toward a shared goal of using their gifts to drive environmental awareness. The region depicted in Roy’s documentary is also home to the Royal Bengal tiger, a creature that should be familiar to many UofM faithful as the University’s longstanding mascot.

“All of the faculty were very excited about her work during the interview process,” Atkins-Sayre says of Roy, who earned a PhD in communication studies while pursuing documentary work. “She studies the concept of environmentalism through several lenses, including through traditional research as well as film.”

As a rare instructor who is adept in communication studies and filmmaking disciplines, Roy contributes to both sides of the department in the form of courses on audio production and media criticism. In both cases, she encourages students to be more aware of the world around them and be present in what’s happening in their communities.

“Visual creativity is something that almost everyone can relate to or become involved in one form or another,” she says. “However, using your ears in such a way is something many people are not familiar with. Adapting from Professor Appleby's syllabus in my audio production classes, I ask students to do things like recreate existing background scores from movies and tell stories through sound.”

Lang, whose focus on narrative films presents a different kind of creativity compared to his  documentary-focused predecessors, recently served as producer on the quirky horror flick “Chompy and the Girls,” (which saw a one-week theatrical run in Memphis through Malco Theatres) as well as co-writer and director for a drama titled “Stay With Me.”

“I have worked in independent film production for about 20 years,” he says. “During that time, I have filled nearly every role on the set: writer, producer, actor, director, you name it. After I spent about five years working in Los Angeles, I felt like I had been in the trenches long enough that I could share some of what I knew and pursue a career in teaching.”

Lang teaches courses on screenwriting, directing and producing, with the latter standing out as a big area of emphasis in his own career.

“I have produced about 40 films, including feature films, short films, TV pilots, web series, that sort of thing,” says Lang. “But it’s the entrepreneurial process that I really try to include in the work I do these days.”

Lang’s producing[R(4]  classes offer a healthy emphasis on crowdsourcing and crowdfunding practices that have become prevalent in modern filmmaking, granting students the opportunity to work as support staff in live crowdfunding campaigns for real filmmakers. This spring, he hopes to help fund the debut narrative film by the Benjamin L. Hooks Institute for Social Change through MomentUM, the University of Memphis’ very own crowdfunding platform. In addition, Lang was recently named as the first-ever Faculty Entrepreneur Fellow of the Crews Center for Entrepreneurship.

“I’ve been working in crowdfunding since 2010 and it is absolutely the future of independent film,” says Lang. “This crowdfunding course is the only semester-long film course in the United States and it has the potential to do great things.”

In the fall of 2021, Lang and Roy received a Communities of Research Scholars (CoRS) grant from the University of Memphis, which will help fund a master class series sponsored by the Department of Communication & Film and MVP3 Film Studio.