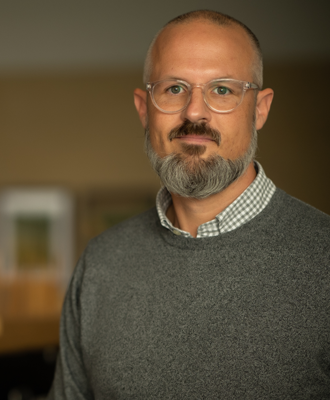 Andrew Parks can see the future, and his banner-sized architectural renderings of upcoming Scheidt Family Music Center displayed on the north end of campus prove it.

Parks, an Instructor in the Department of Architecture, is the mastermind of the architectural visualizations at archimania, the local architecture firm behind the design of the music center, a soon-to-be crown jewel of the Central Avenue Arts Corridor to be completed in 2022.

“I got to be involved in the design of the new music building very early on during the conceptual stages,” Parks says. “I’ve gotten to stay involved throughout the process by creating all of the architectural visualizations for the project.”

An award-winning, multi-faceted designer with nearly two decades of experience working on commercial and residential projects at many scales, Parks specializes in utilizing digital rendering and modeling as a way to develop, test and bring design ideas to life.

As part of one of the most complex acoustical architecture projects of the region in the Scheidt Family Music Center, archimania conducted a series of cross-departmental meetings to create a new building that would be designed from the ground up with sound in mind. Parks had the task of creating the visualizations that would tell the design story and communicate the team’s vision of the exterior form and materiality as well as the interior spaces, atmosphere and finishes.

“archimania has done a lot of performance venues, including the Live at The Garden venue at Memphis Botanic Garden and the outdoor performance venue at Germantown Performing Arts Center,” he says. “As architects and designers, we know we can’t come and say ‘the design has to drive this project,’ we absolutely have to be able to adapt within constraints, which we have carved out a niche for ourselves by working within creatively.”

Since the project started, a team of archimania designers have regularly coordinated with acoustical consultants and engineers, as well as CCFA and music program representatives. In addition to sound concerns, members of the archimania crew will help determine how the feel of the space can be altered through different lighting and stage setups.

“It will be an absolute transformer of a music space that can adapt to all manner of acoustics and performance styles,” he says. “It was very exciting to be part of that kind of dynamic back-and-forth that makes for such good projects.”

A native Memphian, Parks earned a BFA in architecture and a BS in engineering technology at the University of Memphis. For Parks, dual majoring offered the sort of technical knowledge that could grant a distinct advantage over his peers.

“I started in engineering technology and, in my third year, the program shifted to architecture,” he says. “I was able to add an extra year and earn both degrees, which was excellent because there was such an overlap between the courses I was taking at the time.”

The son of a contractor and an avid artist himself, Parks discovered how to fuse his interests in a dynamic way in 1997 when he signed up for a course on the history of architecture taught by now- Department of Architecture chair Michael Hagge. “I was blown away when I saw the ways that people think about buildings as a way to discuss culture, express ideas and integrate with the environment around them,” Parks says. “Early on, I didn’t know what I wanted to major in, but it all came together after that course with Michael Hagge and I’ve never looked back.”

After graduation, Parks headed to UT Knoxville for two years to earn a professional Master of Architecture degree before returning to Memphis to take a job at archimania.

“I only ever interviewed with this firm since I knew where I wanted to be,” he says. “Luckily, I got the job.”

After taking a full-time job at the University of Memphis in 2019 following 15 years as an adjunct instructor, Parks is still active within archimania in a part-time capacity. As a result, a wealth of real-life experience informs his teaching style in his courses, which are focused on things like the architectural design process, visual communication, architectural visualizations and digital media.

Parks was recognized at the 2021 AIA Memphis Gala and Celebration of Architecture for his work at archimania with an Honor Award for Girls Inc. South Park + LDT Centers and a Merit Award for East Memphis House. He served as lead designer and photographer for both projects.