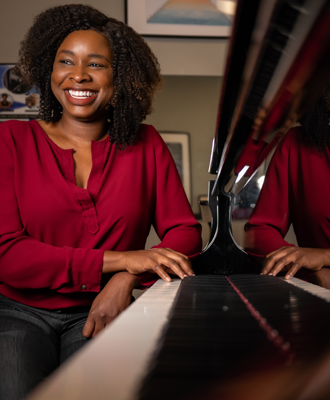 With a career goal of promoting and promulgating the moving music created by little-known Black, female composers, Dr. Artina McCain, coordinator of keyboard studies with the Rudi E. Scheidt School of Music, has a way of celebrating musical history while creating her own.

“Many works of Black composers, as well as female composers, has been historically overlooked,” said McCain. “So, there’s opportunity here. Most people have never heard this sort of music before.”

Expanding the musical canon beyond the three Bs of Bach, Beethoven and Brahms is just one of the achievements of McCain, who was described as a pianist with “power and finesse” by the Dallas Arts Society. McCain enjoys an active career as a solo and chamber performer, educator and lecturer. In addition to teaching more than 25 active students in the school of music, McCain performs nationally and internationally throughout Europe, China and the United States.

In March of 2021, McCain performed alongside one of the country’s most renowned orchestras in the Dallas Symphony Orchestra during a time when most large musical ensembles remained shut down.

“We performed the Florence Price Concerto,” McCain says. “She’s been making a resurgence lately as the leading composer in America and the orchestra programmed her piano concerto along with a commissioned work by a living composer, as well as works from William Grant Still and others.”

McCain’s educationally-focused performance was recorded and broadcast to more than 2,000 students. In addition, she recently also authored “24 Traditional African-American Folk Songs for Intermediate Students,” a book published by Hal Leonard. The book aims to introduce younger or intermediate musicians to unique African American history and music with two dozen folk songs arranged for intermediate piano solo. These songs include recognizable hymns like “Lift Ev'ry Voice and Sing,” “Wade in the Water,” “Sometimes I Feel like a Motherless Child,” and more alongside in-depth notes and beautiful illustrations.

“Some of these tunes have become quite familiar throughout American history,” she says. “And at the intermediate level, almost anyone can play them.

Composers featured prominently in McCain’s recent performances include the likes of Price and Margaret Bonds, both of whom rose to prominence during the Harlem Renaissance period alongside celebrated author Langston Hughes.

“I’m very excited to bring this music to Memphis,” said McCain. “Many people who hear this sort of music are often surprised at just how familiar and influential it is in a way that’s not just specific to Black people, but all ethnic cultures.”

McCain is the mind behind the Rudi E. Scheidt School of Music’ Memphis International Piano Festival + Competition, an annual event that celebrates the piano through concerts, masterclasses and competitive and non-competitive performance events by showcasing the very best pianists from the Memphis area and beyond. Although the events of the past two years were markedly different than piano festivals of days gone by due to the COVID-19 pandemic, McCain and her team at the school of music were able to incorporate some innovative technology to keep the show going.

“One of the motivating factors is the school of music’s new Yamaha Disklavier, which allowed us to do virtual masterclasses,” McCain says. “The instrument can communicate with others like it and works kind of like a player piano. It allows for instructors to see exactly when and how keys are being struck.”

McCain’s husband, Martin, is a professor of bass trombone at Texas State University and frequently performs alongside his wife as one-half of the McCain Dou. The pair played together at the 2021 Music Teacher’s National Association Conference.

“We are both classically trained, so a lot of what we perform together comes from that background," she says. “But we also incorporate a lot of music that we grew up listening to like blues, hip hop and jazz. We commission a lot of composers, as well.”

In addition, McCain was the recipient of the 2021 CCFA Dean's Award for Creative Achievement, which recognizes outstanding achievement in the creative arts in the UofM community. In February of 2022, McCain made her debut at Whitmore Hall in an inaugural series titled “African Concert Series” alongside the Emmy-winning Titus Underwood on oboe and Ebonee Thomas on flute.