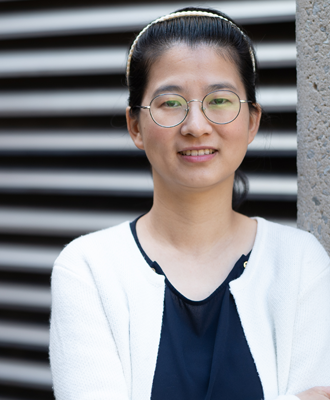 A need to observe and document the effects of contemporary forms of mass media are what drives Dr. Ruoxu Wang, one of the most active research scholars at the University of Memphis and recipient of the 2021 CCFA Dean’s Award for Research.

Wang joined the Department of Journalism and Strategic Media as an assistant professor of advertising in 2017. Before arriving at UofM, she received her Ph.D. from Pennsylvania State University, and her master’s and bachelor's degrees from North Dakota State University. She teaches a range of both graduate and undergraduate classes, including courses on visual media, creative strategy, web publishing, media planning, and quantitative research methods.

Wang’s research focuses on the intersection of media effects and persuasion under the context of strategic communication and communication technology. Her work has been published in a wide variety of peer-reviewed journals, including Mass Communication and Society, Telematics and Informatics, International Journal of Human Computer Interaction, and Social Media + Society, among others.

“I am passionate about research as it relates to social media, websites, and user experience,” she says. “At first, my research interest was pretty much just focused on the psychological impact of the emerging technologies, but as I continued my study at Penn State, I started to learn more about strategic communications such as public relations, advertising, and persuasion. So right now, I like to focus on where technology and advertising meet.”

With a mind geared toward the intersection of advertising and technology, it is no surprise that much of what Wang studies is related to things like web design, mobile gaming and virtual reality. In 2019 and 2020, Wang secured Communities of Research Scholars (CoRS) grants from the University of Memphis to engage in the study of the mobile VR gaming.

“For the mobile VR gaming study, Dr. Jin Yang and I collaborated with Dr. Amy Cook with the Department of Computer Science to create a simple racing game that displayed two different ads, the impact of which was measured on user experience,” Wang says. “It’s still an ongoing process, but it is very exciting.”

Other studies by Wang include examining the most effective ways to display advertising messages on wearable devices and the many factors that can influence ad effectiveness, as well as a study titled “Catch them all: Exploring the psychological impact of playing Pokemon GO” that explores the impact of the 2016 mobile game phenomena.

“We conducted the study in 2016 when everyone was crazy about the game,” Wang says. “We looked at the connection between these different gaming features it offered and how that can impact a sense of community and psychological wellbeing among players.”

Wang’s most recent published study, which appeared in the Journal of Communication Technology, was titled “User Experience (UX) Matters: What are the Most Desired Skills in the UX Designer and UX Researcher Job Ads” and examined 200 UX job ads, 100 UX designer ads and 100 UX researcher ads, to determine the most needed skills in the field of user experience.

For Wang, one of the most interesting and unique parts of her work is how much it deals with the human element.

“Many of the studies we do within our department deal with social science research,” she says. “We study people a lot. We deal with people and rely on them to build conclusions, so it isn’t like chemistry or physics.”

Dr. Wang’s work has been recognized with the top paper awards from AEJMC and IPRRC in 2016. In 2019, she won the Top Three Most Promising Professor Award from AEJMC’s Mass Communication and Society division. In 2020, she won the D. Mike Pennington Outstanding Mentoring Award from the Department of Journalism and Strategic Media. In addition, she currently serves as the associate chair of the awards committee at AEJMC’s Mass Communication and Society Division.