The following example is from a real student's service-learning experience. This example will be used throughout the four steps of solving conflict to illustrate each step. 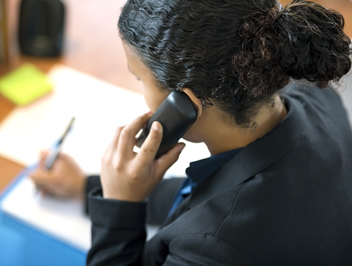 Elizabeth was a student involved in a service-learning assignment at Prairie Street Network Center (PSNC), every Friday from 12-2 pm, the center's "slow time." She was given the job of answering the phone at the front desk. Unfortunately, this was not an active time and she spent most of her time sitting with little to do. After the first 3 weeks of a similar pattern of little interaction with others, Elizabeth became irritated. She felt there was little value in her spending her time at Prairie Street if she wasn't doing anything to benefit the agency.

Elizabeth decided to talk to Steve, one of the supervisors there, and let him know how she was feeling. She told him that with so few calls during her shift, she felt she is not doing anything helpful for the center and not really making the most of her experience. To her surprise, Steve said he didn't realize that she wasn't assigned anything to do when the phones were quiet. He recognized that her task wasn't fulfilling her service-learning requirements. Steve assured Elizabeth that he could find something for her.

The next week when Elizabeth returned, Steve asked her if she had any ideas about what she would like to work on. He had also come up with a list of projects that needed to be completed. Together, they chose activities that would be interesting for her and useful for the Center. He showed her how to get started on the first project, and Elizabeth spent the remainder of her time working on projects that allowed her to learn and gain valuable experience while helping the Prairie Street Network Center achieve its goals.