One early morning in 1972, Benjamin Hooks received a call from Howard Baker, Republican senator from Tennessee. Baker informed Hooks that he intended to make Hooks the first Black nominee for the Federal Communications Commission. At first, Hooks, suspicious of adjoining himself to the Nixon administration, declined the offer but after discussing the matter with his wife, Hooks changed his mind and accepted the nomination.

As Hooks recalled in one of his memoirs, the nomination process and his eventual appointment was mostly determined by racial politics. When the U.S. Senate initially debated the appointments, William D. Wright, president of Black Efforts for Soul in Television, demanded to know why no Blacks were being considered for the commissioner role. After a heated exchange in which Wright accused the Senate committee of blatant racism, the committee adjourned and turned to President Nixon in order to assure that a Black man was duly considered. As Wright refused to back off his accusations of racism, the white nominees were all stalled and Hooks’ confirmation as FCC commissioner went through the Senate relatively swiftly.

As a FCC commissioner, Ben Hooks was charged with overseeing the branch of the Federal government which regulated the communications industry of the United States. A legacy of New Deal legislation of the mid 1930s, the FCC was officially chartered to “make available so far as possible, to all the people of the United States, without discrimination on the basis of race, color, religion, national origin, or sex, rapid, efficient, Nationwide and world-wide wire and radio communication services with adequate facilities at reasonable charges.” In its original form, it was intended to bolster national security, as communication with the public regarding security threats was deemed the responsibility of the federal government. Over time as the communications industry developed, it began to regulate TV and cable companies and at present contains seven bureaus that regulate various aspects of telecommunications and broadcasting. 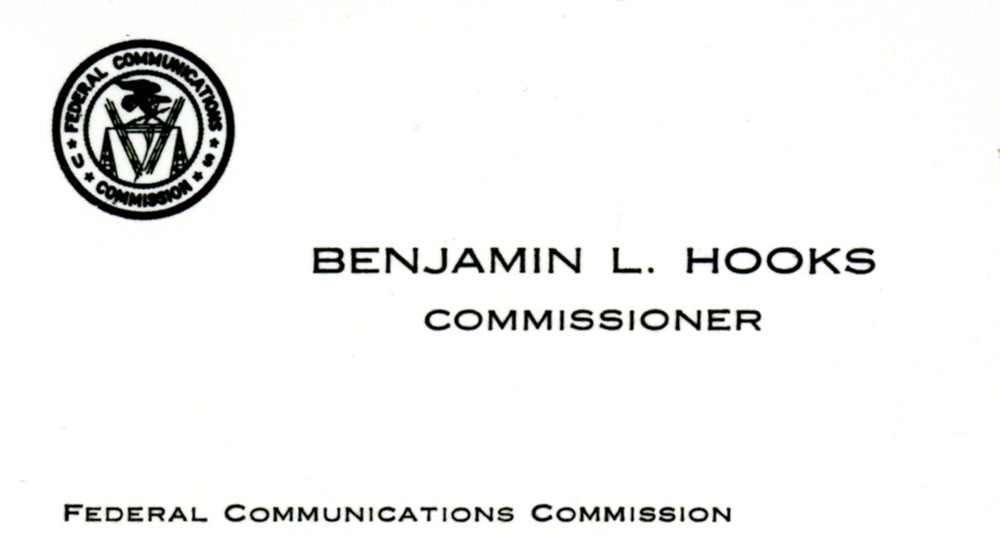 As a civil rights activist, Hooks carried over the principles cultivated throughout his life as a preacher, lawyer, and judge into the FCC. As Hooks would recall, after only a few days as the FCC commissioner, he saw that his job would entail “confronting and trying to right some of the historic wrongs involving race and gender that the Commission and the industry it regulates had perpetuated for so very, very long.” It was not that he, himself, as the FCC Commissioner encountered racism but rather saw that the policies still enforced by the FCC had not adapted to a post-civil rights era. As Hooks reported, of the 2,200 FCC employees, only five were Black when he arrived, but upon his departure, he had boosted the number to north of 70.

Hooks’ tenure with the FCC makes up a minor portion of the Benjamin Lawson Hooks papers. Of the 397 boxes in the collection, only 11 pertain to the FCC and none of the major photograph or audiovisual files contain materials from Hooks’ tenure with the FCC. However, contained within the FCC files are a series of at least two dozen interviews and speeches that Hooks gave as FCC commissioner. These speeches and interviews demonstrate that Dr. Hooks’ civil rights initiatives continued throughout his tenure as FCC commissioner, even if filtered through a new lens of broadcasting and networking initiatives.

In addition to pressing the FCC, itself, to hire more minorities as mentioned above, Hooks used his position as FCC commissioner to press for the inclusion of minorities in all areas of the American broadcasting industry. In one of his first speeches as FCC Commissioner in July of 1972, Dr. Hooks talked to the Wisconsin Broadcasters’ Association about what he called the “Black-In” move within the Communications industry. By Black-In broadcasting, Hooks meant “BLACK-IN programming, BLACK-IN employment, BLACK-IN managerial affairs, BLACK-IN community participation, BLACK-IN every aspect of the broadcasting landscape.” Hooks continued that for “too long, Blacks as well as other minorities, have been excluded from meaningful participation in the communications medium, and as Commissioner I intend to marshal every resource at my command to ameliorate the situation.” 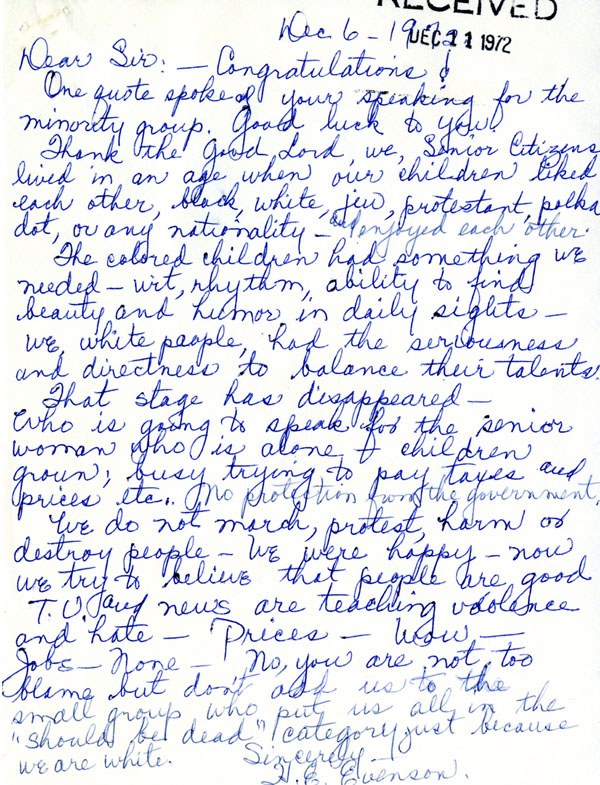 Hooks echoed this same theme throughout many of his speeches, remarking to the Universal Life Insurance Company in 1973, that the media is still all too closed off to the Black community as well as women and other minorities. He noted that of the 38,000 individuals working in the newspaper industry as “writers, editors, photographers” and general newsroom professionals, less than 1 percent were minorities and women. Even in the industry at large, only about 4.6 percent of the newspaper work force was occupied by Black individuals. In the TV industry, no Blacks own any of the 693 TV stations operating in the country, and that only on Black man in Jackson, Mississippi, Bill Dilday, even manages a TV station. Thus, Hooks wanted to make sure that FCC worked with its internal EEO (Equal Employment Opportunity) Unit to ensure that the FCC “set about correcting some of the historical employments wrongs within the Agency.” Further, it had recently established an external EEO unit to regulate the hiring standards of the broadcast industry to insure people of all genders and races received equal opportunity for employment in broadcasting.

While Hooks was committed to insuring that the broadcasting and communications industry sought to hire qualified minorities, Hooks was also keenly aware of the double-edged sword that the industry had brought to the Black community. On the one hand, the entertainment industry had provided the Black community with a very visible form of progress. Many of the most visible well-to-do members of the Black community were televised musicians, athletes, and entertainers who had provided the Black community with role models. On the other hand, the entertainment industry obscured the reality of the Black community by only promoting both the positive and negative sensations of the Black community to the detriment of normal working class Black families. As Hooks once remarked in an interview with The Black Journal, “Minorities need positive models that they can govern themselves on. When my little grandson watches a television set, he may not be able to be a singer and athlete, but hopefully he may have enough brains to be a lawyer or a doctor.” The white community is constantly shown images of successful working class people but much work was needed to ensure that Blacks had both access to working opportunities in the broadcasting and communications industry and were represented fairly and equally by the programs of the broadcasting industry.

Dr. Hooks resigned as FCC commissioner in 1977 to take over the position of Executive Director of the NAACP but his legacy as the first Black FCC commissioner paved the way for other Black members including Tyrone Brown, Andrew Barrett, Willian Kennard, and eventual chairman, Michael Powell.