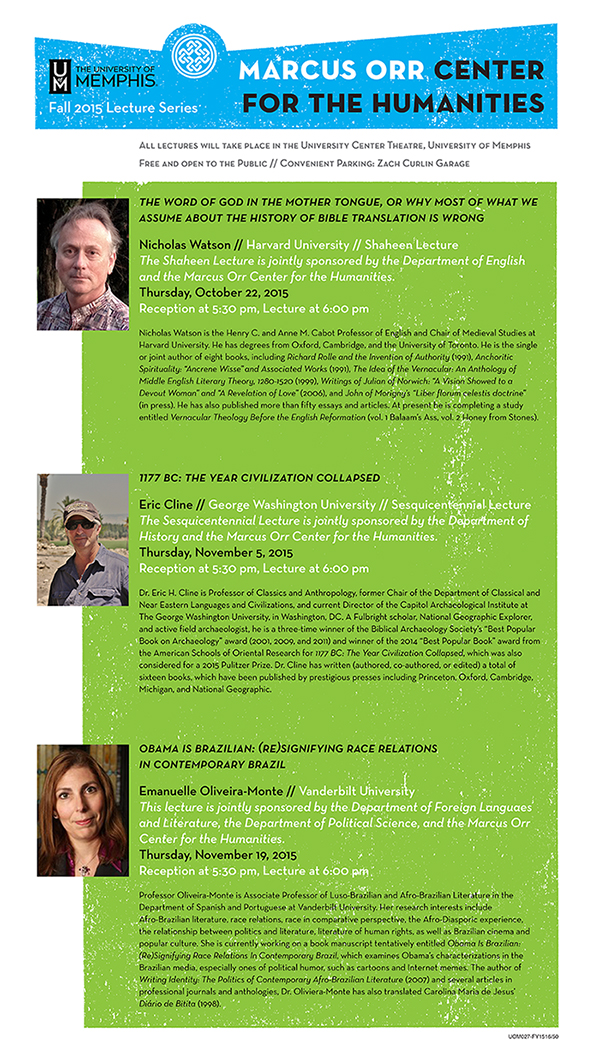 All lectures will take place in the University Center Theatre,
University of Memphis
Free and open to the Public
Convenient Parking: Zach Curlin Garage

The Word of God in the Mother Tongue, Or why most of what we assume about the history of Bible translation is wrong

Professor Watson's lecture will consider the popular, but largely false, story that the there were no Bibles in English prior to the late fourteenth century. There is a widespread belief that the Bible was largely "trapped" in Latin—a language that few could understand—and jealously guarded from the direct gaze of the laity by church authorities who banned English copies. This tale, however widely shared, is not entirely true. There is an enormous body of vernacular writing from medieval England dedicated to the translation and exposition of the Christian Scriptures. The Scriptures were at the heart of vernacular preaching. They were fundamental to vernacular catechesis. They were a constant source of vernacular devout entertainment. Although we know of no full English Bibles before the late fourteenth century, the Bible was kept from the laity in neither practice nor theory. Vernacular Bible translation was never banned; it was basic to Christian teaching. Watson will discuss how the story of banned English Bibles came about and how it has influenced historical scholarship down the centuries.

Nicholas Watson is the Henry C. and Anne M. Cabot Professor of English and Chair of Medieval Studies at Harvard University. He has degrees from Oxford, Cambridge, and the University of Toronto. He is the single or joint author of eight books, including Richard Rolle and the Invention of Authority (1991), Anchoritic Spirituality: "Ancrene Wisse" and Associated Works (1991), The Idea of the Vernacular: An Anthology of Middle English Literary Theory, 1280-1520 (1999), Writings of Julian of Norwich: "A Vision Showed to a Devout Woman" and "A Revelation of Love" (2006), and John of Morigny's "Liber florum celestis doctrine" (in press). He has also published more than fifty essays and articles. At present he is completing a study entitled Vernacular Theology Before the English Reformation (vol. 1 Balaam's Ass, vol. 2 Honey from Stones).

1177 BC: The Year Civilization Collapsed

Professor Clines' lecture will examine the swift demise of complex Late Bronze Age empires in the Mediterranean region around the year 1177 BC. For more than three hundred years, from about 1500 BC to 1200 BC, there existed a complex international world in which Egyptians, Mycenaeans, Minoans, Hittites, Assyrians, Babylonians, Cypriots, and Canaanites all interacted, creating a cosmopolitan and globalized world-system such as has only rarely been seen before the current day. Yet, around 1177 BC, these large empires and small kingdoms that had taken centuries to evolve began to rapidly collapse. With their end came the world's first recorded Dark Ages. It was not until centuries later that a new cultural renaissance emerged in Greece and the other affected areas, setting the stage for the evolution of Western society as we know it today. Blame for these events is usually laid squarely at the feet of the so-called Sea Peoples, known to us from the records of Egyptian pharaohs. However, as was the case with the fall of the Roman Empire, the end of the Bronze Age empires in this region was not the result of a single invasion, but of multiple causes. The Sea Peoples may well have been responsible for some of the destruction, but it is much more likely that a combination of events, both human and natural — including earthquakes, storms, droughts, famine, rebellions, and systems collapse — coalesced to cause such a cataclysmic turn of events. The similarities and parallels that can be drawn with the world today make this more than simply a study in ancient history.

Eric H. Cline is Professor of Classics and Anthropology, former Chair of the Department of Classical and Near Eastern Languages and Civilizations, and current Director of the Capitol Archaeological Institute at The George Washington University, in Washington, DC. A Fulbright scholar, National Geographic Explorer, and active field archaeologist, he is a three-time winner of the Biblical Archaeology Society's "Best Popular Book on Archaeology" award (2001, 2009, and 2011) and winner of the 2014 "Best Popular Book" award from the American Schools of Oriental Research for 1177 BC: The Year Civilization Collapsed, which was also considered for a 2015 Pulitzer Prize. Dr. Cline has written (authored, co-authored, or edited) a total of sixteen books, which have been published by prestigious presses including Princeton, Oxford, Cambridge, Michigan, and National Geographic.

Professor Oliveira-Monte's lecture will explore what President Barack Obama's election as the United States' first black president meant to Brazil, a country where 51 percent of the population is black but there has never been a black president. She looks largely at Obama's characterizations in the Brazilian media, and especially in political humor. Racially, Brazilians have always seen the United States as its nemesis: a country plagued by racial segregation and violence, whereas Brazil has been frequently seen as a "racial paradise," a nation devoid of color prejudice. However, the election of a black candidate for the highest office of the most powerful nation in the world revealed a conundrum for Brazil. Would it be possible for the country to elect a black president committed to Afro-Brazilians and marginalized segments of the population? Or is racial democracy forever destined to be a myth, an appeasing discourse that in reality relegates blacks to the society's lower strata? This lecture delves into these intriguing questions, revealing a continuous dialogue between the United States and Brazil, a dialogue in which racial categories are continuously rearticulated and reformulated.

Emanuelle Oliveira-Monte is Associate Professor of Luso-Brazilian and Afro-Brazilian Literature in the Department of Spanish and Portuguese at Vanderbilt University. Her research interests include Afro-Brazilian literature, race relations, race in comparative perspective, the Afro-Diasporic experience, the relationship between politics and literature, literature of human rights, as well as Brazilian cinema and popular culture. She is currently working on a book manuscript tentatively entitled Obama Is Brazilian: (Re)Signifying Race Relations In Contemporary Brazil, which examines Obama's characterizations in the Brazilian media, especially ones of political humor, such as cartoons and Internet memes. The author of Writing Identity: The Politics of Contemporary Afro-Brazilian Literature (2007) and several articles in professional journals and anthologies, Dr. Oliviera-Monte has also translated Carolina Maria de Jesus' Diário de Bitita (1998).