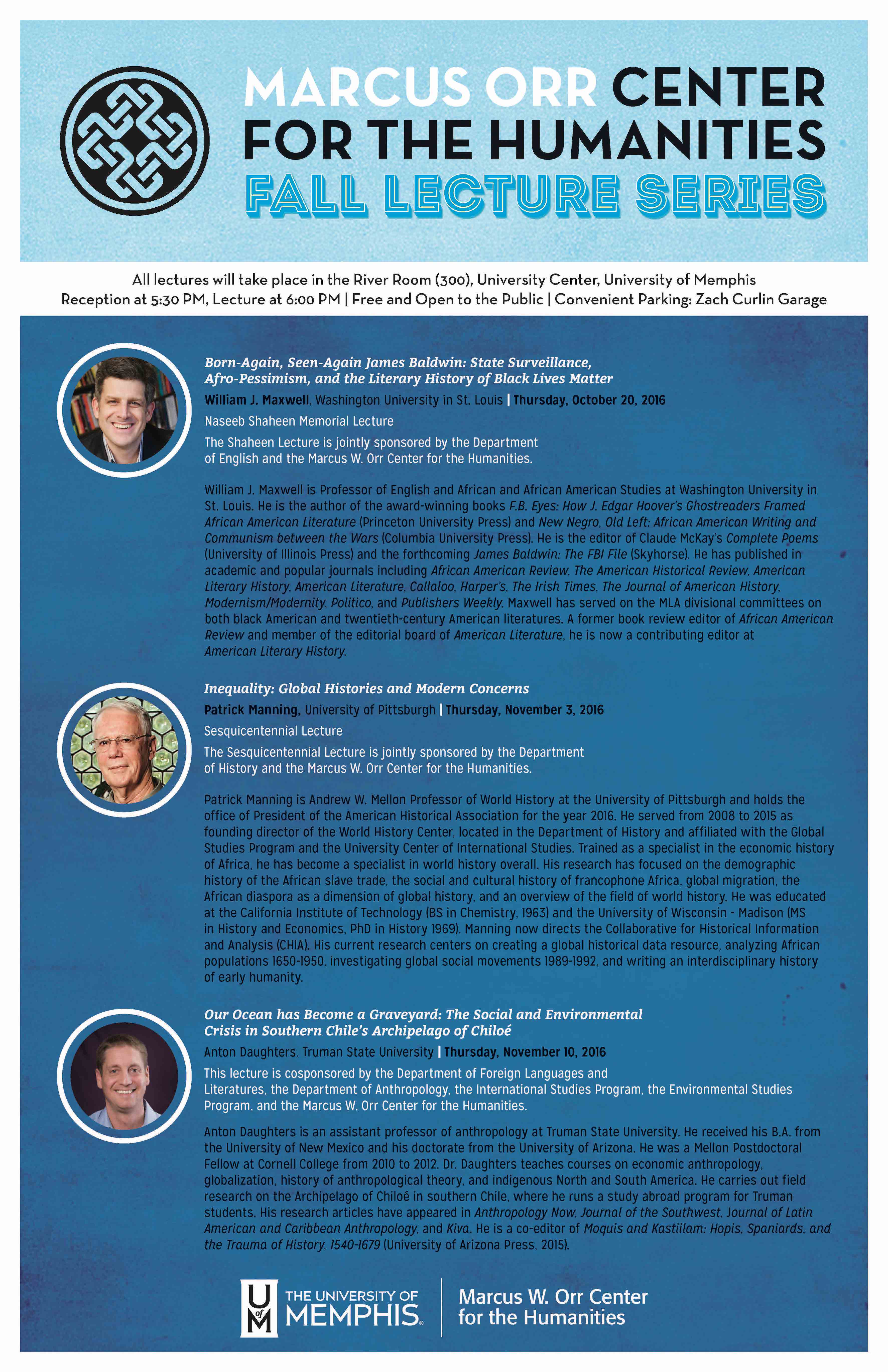 All lectures will take place in the River Room (300), University Center,
University of Memphis
Free and open to the Public
Convenient Parking: Zach Curlin Garage

James Baldwin, buried in 1987, often looks like today's most vital and beloved new African American author. This lecture will explore the reasons behind Baldwin's resurrection, from his elevated place in the cultural memory of the Black Lives Matter movement, to his function as an antidote to the frozen time of Afro-Pessimism, to his status as an icon of state surveillance and racial counter-surveillance.

Inequality in contemporary society clashes with the growing belief in the value of social equality. What is the history of inequality? This talk describes the research design and preliminary results of the CHIA study of socio-economic inequality worldwide since 1600 CE. More broadly, it asks, is inequality functional for human society, or does it cause waste?

Patrick Manning is Andrew W. Mellon Professor of World History at the University of Pittsburgh and holds the office of President of the American Historical Association for the year 2016. He served from 2008 to 2015 as founding director of the World History Center, located in the Department of History and affiliated with the Global Studies Program and the University Center of International Studies. Trained as a specialist in the economic history of Africa, he has become a specialist in world history overall. His research has focused on the demographic history of the African slave trade, the social and cultural history of francophone Africa, global migration, the African diaspora as a dimension of global history, and an overview of the field of world history. He was educated at the California Institute of Technology (BS in Chemistry, 1963) and the University of Wisconsin - Madison (MS in History and Economics, PhD in History 1969). Manning now directs the Collaborative for Historical Information and Analysis (CHIA). His current research centers on creating a global historical data resource, analyzing African populations 1650-1950, investigating global social movements 1989-1992, and writing an interdisciplinary history of early humanity.

Our Ocean has Become a Graveyard: The Social and Environmental Crisis in Southern Chile’s Archipelago of Chiloé

Forty years ago, southern Chile's Archipelago of Chiloé was a rural, politically marginalized province of little economic import to most Chileans. Today it is one of the world's leading exporters of farmed salmon and an increasingly popular destination for tourists. This rapid shift into the global economy has triggered a series of social and environmental crises that came to a peak in May of this year when protesters cut off access to the archipelago for more than two weeks. Drawing on participant observation fieldwork and repeated visits to Chiloé from 2002 to 2016, this lecture traces the recent history of the archipelago and discuss the cultural and economic challenges that globalization has created for residents of this unique austral region.

Anton Daughters is an assistant professor of anthropology at Truman State University. He received his B.A. from the University of New Mexico and his doctorate from the University of Arizona. He was a Mellon Postdoctoral Fellow at Cornell College from 2010 to 2012. Dr. Daughters teaches courses on economic anthropology, globalization, history of anthropological theory, and indigenous North and South America. He carries out field research on the Archipelago of Chiloé in southern Chile, where he runs a study abroad program for Truman students. His research articles have appeared in Anthropology Now, Journal of the Southwest, Journal of Latin American and Caribbean Anthropology, and Kiva. He is a co-editor of Moquis and Kastiilam: Hopis, Spaniards, and the Trauma of History, 1540-1679 (University of Arizona Press, 2015).