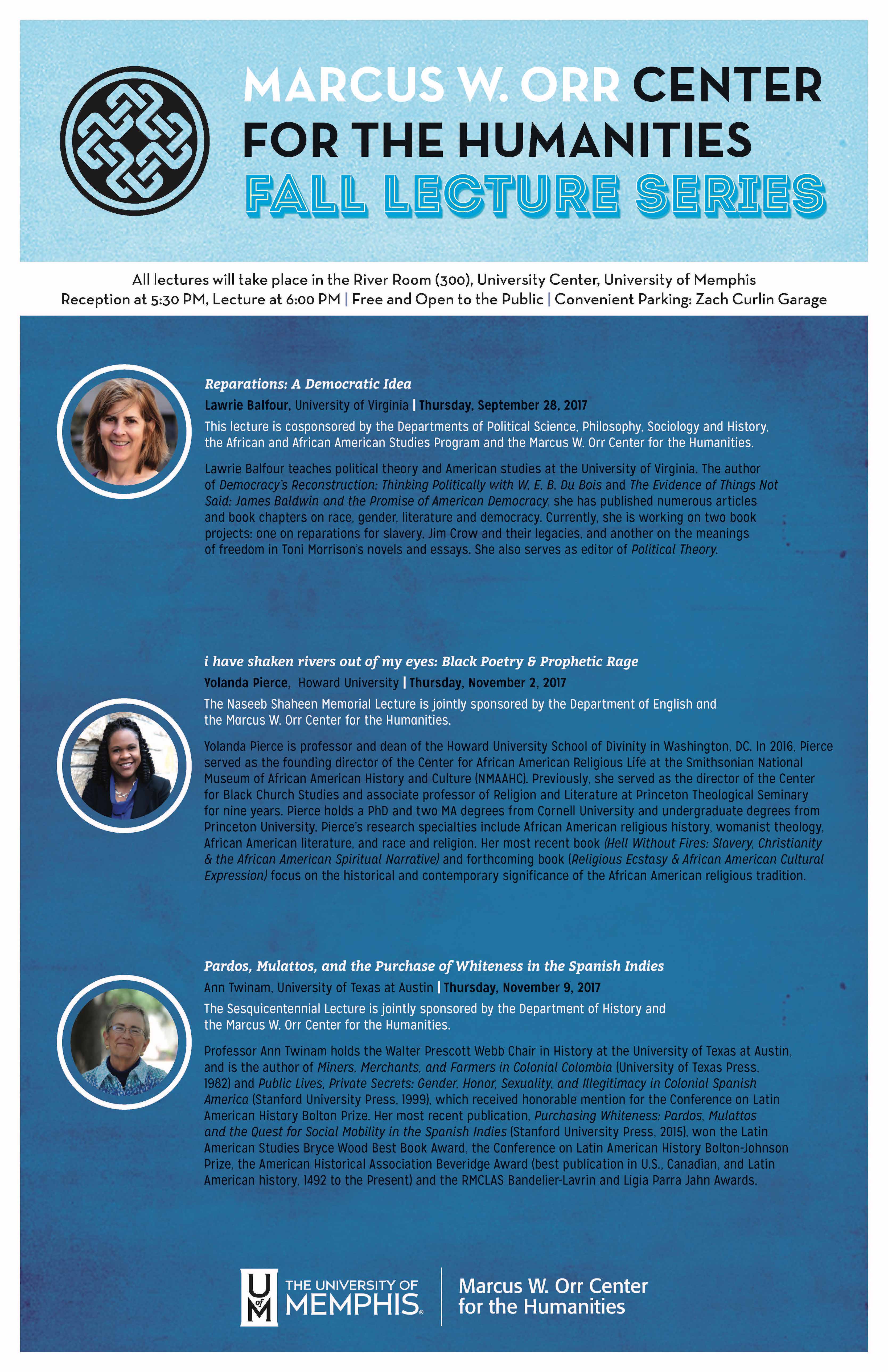 All lectures will take place in the River Room, 300 University Center, University of Memphis Campus
Free and open to the public
Convenient and affordable parking available in the Zach Curlin Garage

Demands for reparations for slavery and Jim Crow have been dismissed as costly, divisive, and unfair. Yet African American activists and intellectuals from the 19th century to the 21st have often expressed their political aspirations in the language of reparations. Taking these claims seriously, I argue, is not only long overdue but essential for the realization of equal citizenship in the United States. I will lay out my case for reparations as a democratic idea in three parts. First, I will offer a brief history of reparations movements within the U.S. and globally. Second, I will explore how reparations enable us to grapple with the legacies of the past in concrete and symbolic ways and to activate the collective responsibilities of all citizens. Third, I will consider how the language of reparations can be used to counter practices of racialized policing and punishment, on the one hand, and the spread of white supremacist rhetoric and politics, on the other.

Lawrie Balfour teaches political theory and American studies at the University of Virginia. The author of Democracy's Reconstruction: Thinking Politically with W. E. B. Du Bois and The Evidence of Things Not Said: James Baldwin and the Promise of American Democracy, she has published numerous articles and book chapters on race, gender, literature, and democracy. Currently, she is working on two book projects: one on reparations for slavery, Jim Crow, and their legacies; and another on the meanings of freedom in Toni Morrison's novels and essays. She also serves as editor of Political Theory.

i have shaken rivers out of my eyes: Black Poetry & Prophetic Rage

Yolanda Pierce is Professor and Dean of the Howard University School of Divinity in Washington, DC. She is the first woman to be appointed as Dean in the Divinity School’s 150-year history. In 2016, Pierce served as the Founding Director of the Center for African American Religious Life at the Smithsonian National Museum of African American History and Culture (NMAAHC). Previously, she served as the Director of the Center for Black Church Studies and Associate Professor of Religion and Literature at Princeton Theological Seminary for 9 years. Pierce holds a Ph.D. and two M.A. degrees from Cornell University and undergraduate degrees from Princeton University. Pierce’s research specialties include African American Religious History, Womanist Theology, African American Literature, and Race and Religion. Her most recent book (Hell Without Fires: Slavery, Christianity & the African American Spiritual Narrative) and forthcoming book (Religious Ecstasy & African American Cultural Expression) focus on the historical and contemporary significance of the African American religious tradition. ‬‬She has written over 40 critical essays and articles in academic and trade journals which consider the relationship between religious faith, race, and gender in the American context. In addition to her teaching and academic scholarship, Yolanda Pierce is a dedicated mentor, community activist, board member of a foster care agency, and cable news commentator.

Pardos, Mulattos, and the Purchase of Whiteness in the Spanish Indies

The colonization of Spanish America resulted in the mixing of Natives, Europeans, and Africans and the creation of a casta system that discriminated against them. Yet members of mixed races could free themselves from such burdensome restrictions through the purchase of a gracias al sacar—a royal exemption that provided the privileges of Whiteness. For more than a century, the concept of the whitening gracias al sacar has fascinated historians, even though the documents remained elusive. Purchasing Whiteness explores 40 cases of whitening petitions, tracking thousands of pages of ensuing conversations as petitioners, royal officials, and local elites disputed not only whether the state should grant full whiteness to deserving individuals, but whether selective prejudices against the castas should cease. This presentation asks a key question: what historic variables made it possible for pardos and mulattos—unlike their counterparts in Anglo-America—to move from slavery to freedom, to mix with Natives and Whites and to be transformed into vassals worthy of such royal favor?