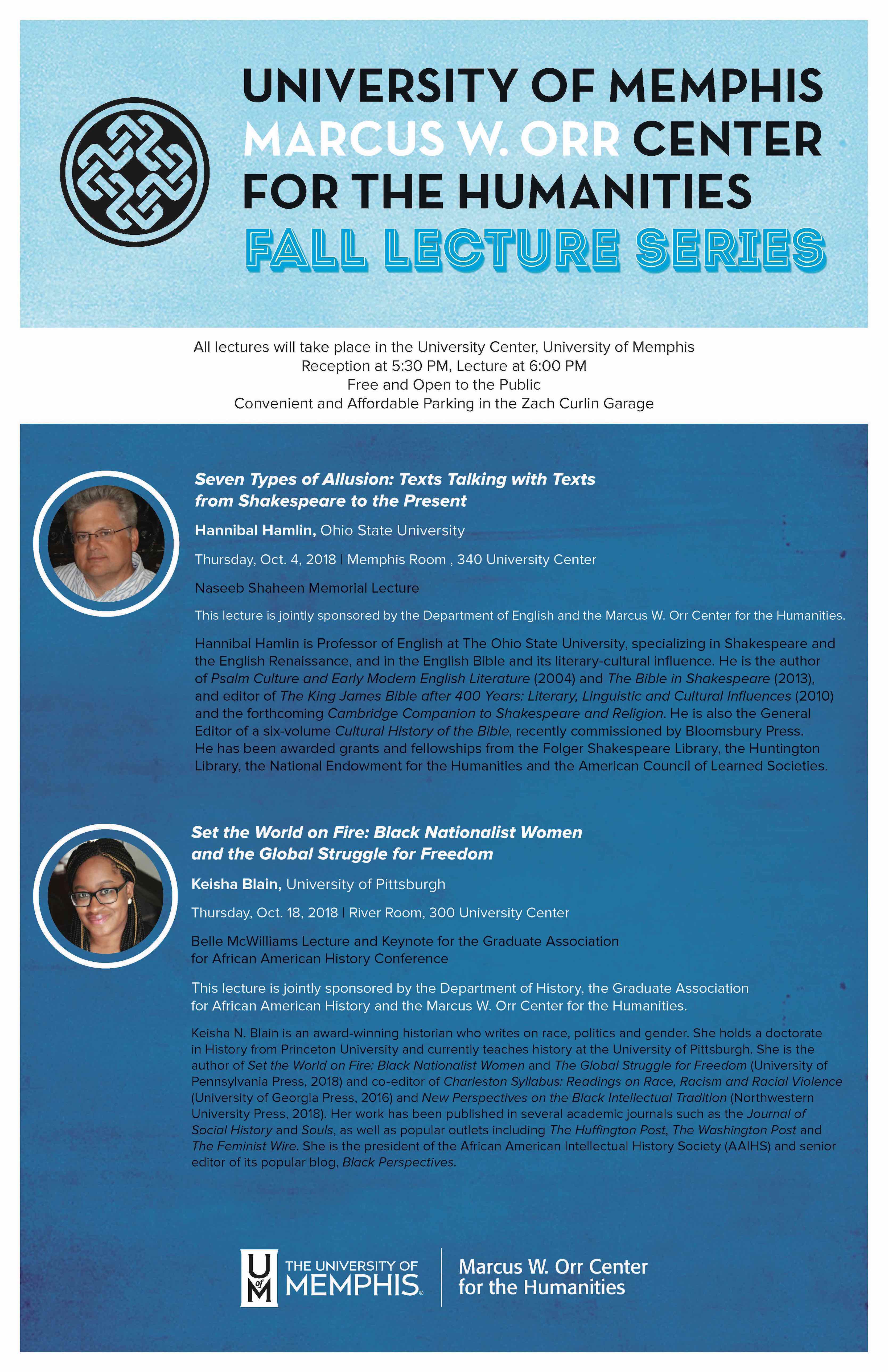 Seven Types of Allusion: Texts Talking with Texts from Shakespeare to the Present

Like the “ambiguity” of William Empson’s more famous “seven types,” allusion is one of the master tropes of literature. Theorists from Aristotle and Auerbach have explored the mimetic function of literature, the way it mirrors reality. But literature also reflects, responds to, or incorporates other prior literature as well. Shakespeare is famous for never inventing a plot when he could steal one from another writer, and he alludes constantly to Ovid, Virgil, Chaucer, Spenser, popular plays and ballads, and especially the Bible. In turn, later writers allude to Shakespeare, and each other, to the point where allusive chains develop linking Virgil, Spenser, Shakespeare, Milton, Wordsworth, and others. This lecture will explore the variety of ways in which writers allude to each other and the implications of intertextuality for our understanding of literary expression and communication.

Hannibal Hamlin is Professor of English at the Ohio State University, specializing in Shakespeare and the English Renaissance, and in the English Bible and its literary-cultural influence. He is the author of Psalm Culture and Early Modern English Literature (2004) and The Bible in Shakespeare (2013), and editor of The King James Bible after 400 Years: Literary, Linguistic, and Cultural Influences (2010) and the forthcoming Cambridge Companion to Shakespeare and Religion. He is also the General Editor of a six-volume Cultural History of the Bible, recently commissioned by Bloomsbury Press. He has been awarded grants and fellowships from the Folger Shakespeare Library, the Huntington Library, the National Endowment for the Humanities, and the American Council of Learned Societies.

‘Set the World on Fire’: Black Nationalist Women and the Global Struggle for Freedom

In this talk, historian Keisha N. Blain discusses how black nationalist women engaged in national and global politics during the twentieth century. In Chicago, Harlem, and the Mississippi Delta, from Britain to Jamaica, these women built alliances with people of color around the globe, agitating for the rights and liberation of black people in the United States and across the African diaspora. As pragmatic activists, they employed multiple protest strategies and tactics, combined numerous religious and political ideologies, and forged unlikely alliances in their struggles for freedom. Their stories, which have been largely hidden in popular historical narratives, underscore the depth and complexities of the global black freedom struggle and offer valuable lessons for contemporary black politics and activism.

Keisha N. Blain is an award-winning historian who writes on race, politics, and gender. She obtained a PhD in History from Princeton University and currently teaches history at the University of Pittsburgh. She is the author of Set the World on Fire: Black Nationalist Women and the Global Struggle for Freedom (University of Pennsylvania Press, 2018) and co-editor of Charleston Syllabus: Readings on Race, Racism and Racial Violence (University of Georgia Press, 2016) and New Perspectives on the Black Intellectual Tradition (Northwestern University Press, 2018). Her work has been published in several academic journals such as the Journal of Social History and Souls, as well as popular outlets including the Huffington Post, The Washington Post, and The Feminist Wire. She is the president of the African American Intellectual History Society (AAIHS) and senior editor of its popular blog, Black Perspectives.