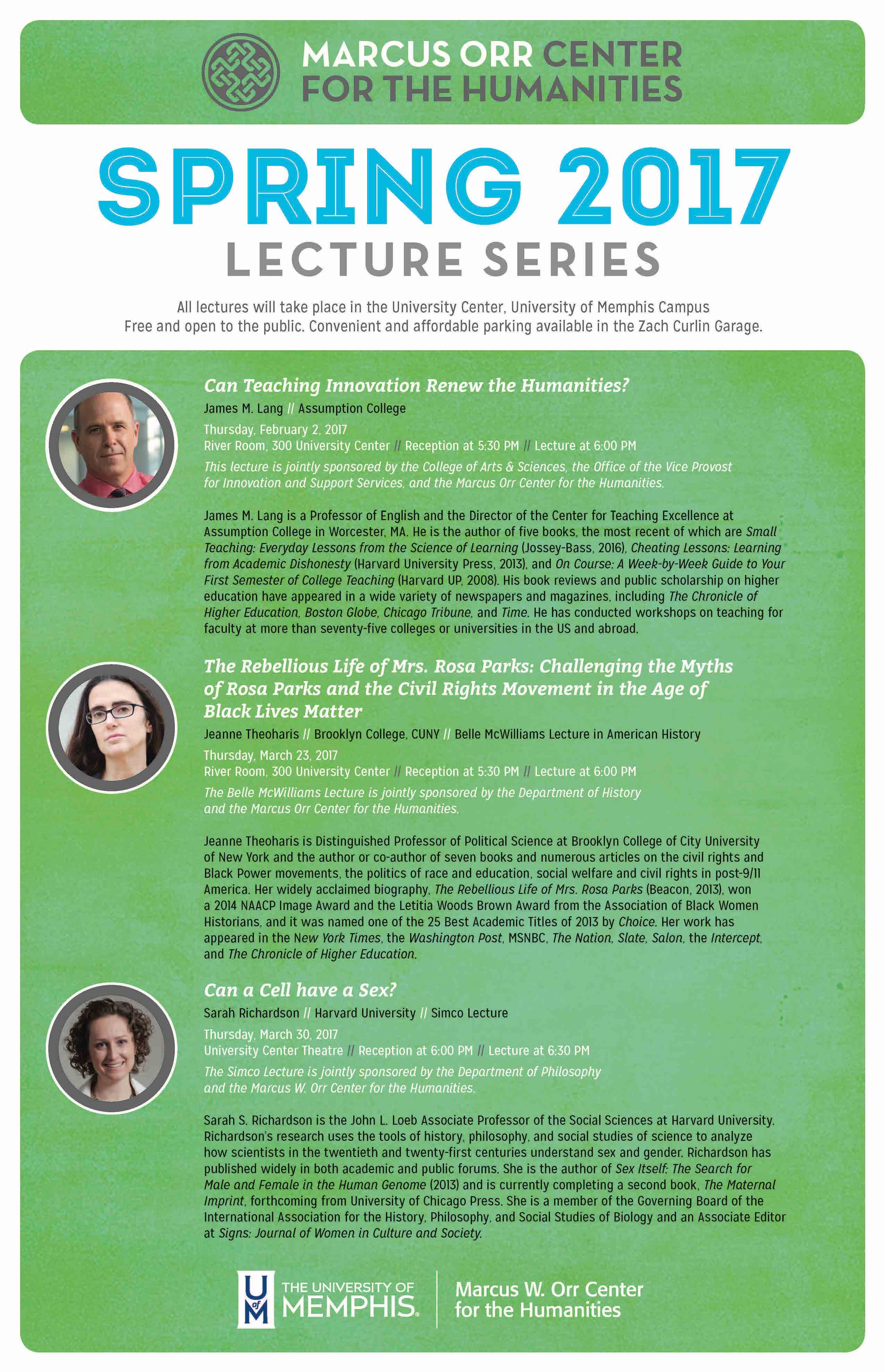 Can Teaching Innovation Renew the Humanities?

Current debates about the value of the humanities within the academy must remain attentive to the essential role that teaching can play in demonstrating their relevance to the lives of our students and the public. This lecture will consider the extent to which teaching approaches impact our understanding of the humanities, and make an argument for the power of innovative new teaching approaches that can help renew our commitment to their value.

James M. Lang is a Professor of English and the Director of the Center for Teaching Excellence at Assumption College in Worcester, MA. He is the author of five books, the most recent of which are Small Teaching: Everyday Lessons from the Science of Learning (Jossey-Bass, 2016), Cheating Lessons: Learning from Academic Dishonesty (Harvard University Press, 2013), and On Course: A Week-by-Week Guide to Your First Semester of College Teaching (Harvard UP, 2008). Lang writes a monthly column on teaching and learning for The Chronicle of Higher Education; his work has been appearing in the Chronicle since 1999. His book reviews and public scholarship on higher education have appeared in a wide variety of newspapers and magazines, including the Boston Globe, Chicago Tribune, and Time. He edits a new series of books on teaching and learning in higher education for West Virginia University Press. He has conducted workshops on teaching for faculty at more than seventy-five colleges or universities in the US and abroad. He has a BA in English and Philosophy from the University of Notre Dame, an MA in English from St. Louis University, and a Ph.D. in English from Northwestern University.

The Rebellious Life of Mrs. Rosa Parks: Challenging the Myths of Rosa Parks and the Civil Rights Movement in the Age of Black Lives Matter

Rosa Parks is one of the most well-known Americans of the 20th century, lauded by the New York Times when she died as the "accidental matriarch of the civil rights movement." But much of what is known about her distorts her life and politics and the movements she was active in across the 20th century. Parks wasn't meek or passive or a one-hit wonder, but a lifelong activist around issues of racial, economic, global, and criminal justice. This talk will examine Rosa Parks' "life history of being rebellious", as she put it, in the process challenging many of the myths of Parks and the civil rights movement in circulation today.

Jeanne Theoharis is Distinguished Professor of Political Science at Brooklyn College of City University of New York and the author or co-author of seven books and numerous articles on the civil rights and Black Power movements, the politics of race and education, social welfare and civil rights in post-9/11 America. Her widely-acclaimed biography, The Rebellious Life of Mrs. Rosa Parks, won a 2014 NAACP Image Award and the Letitia Woods Brown Award from the Association of Black Women Historians, and it was named one of the 25 Best Academic Titles of 2013 by Choice. Her work has appeared in the New York Times, the Washington Post, MSNBC, The Nation, Slate, Salon, the Intercept, and The Chronicle of Higher Education.‬‬

Can a Cell have a Sex?: Biological and Social Ontologies of Sex

The mantra that "Every cell has a sex" has, over the last decade, come to represent the leading edge of a particular brand of women's health activism, located within the halls of power and funding of the molecular biosciences. Fulfilling the cause of women's health, these advocates claim, is not limited just to research on women's reproductive organs and diseases – it extends to every organ, tissue, and cell. Not merely a slogan, this understanding of the concept of sex comes with real-life policy implications. In a much-debated move, the NIH recently announced a sweeping new policy requiring researchers to include plans to analyze "male" and "female" cells, tissues, and animals in all funding applications. Beyond the world of science, the claim that sex is omnipresent at every level of biological organization within an individual has implications for political debates over the nature of sexual identity, including legal interpretations of sexual identity in the case of transgender and intersex individuals and debates over sex-testing in elite competitive sports. Today's emerging consensus that sex is omnipresent in the body differs from historical understandings of sex, and the relationship between "sex" in materials such as cells and "sex" in embodied men and women is not a straightforward one. The notion that sex inheres in every cell raises philosophically tantalizing questions that lie right at the intersection of philosophy of biology, metaphysics, and feminist philosophy: When should we attribute the parts of an organism – organs, tissues, cells – the same qualities as the whole individual? And, if a cell can have a sex, what, precisely, is sex?

Sarah S. Richardson is the John L. Loeb Associate Professor of the Social Sciences at Harvard University. She is jointly appointed in the Department of the History of Science and the Committee on Degrees in Studies of Women, Gender, and Sexuality. Richardson's research uses the tools of history, philosophy, and social studies of science to analyze how scientists in the twentieth and twenty-first centuries understand sex and gender. Richardson has published widely in both academic and public forums. She is the author of Sex Itself: The Search for Male and Female in the Human Genome (2013) and is currently completing a second book, The Maternal Imprint, forthcoming from University of Chicago Press. She is a member of the Governing Board of the International Association for the History, Philosophy, and Social Studies of Biology and an Associate Editor at Signs: Journal of Women in Culture and Society.