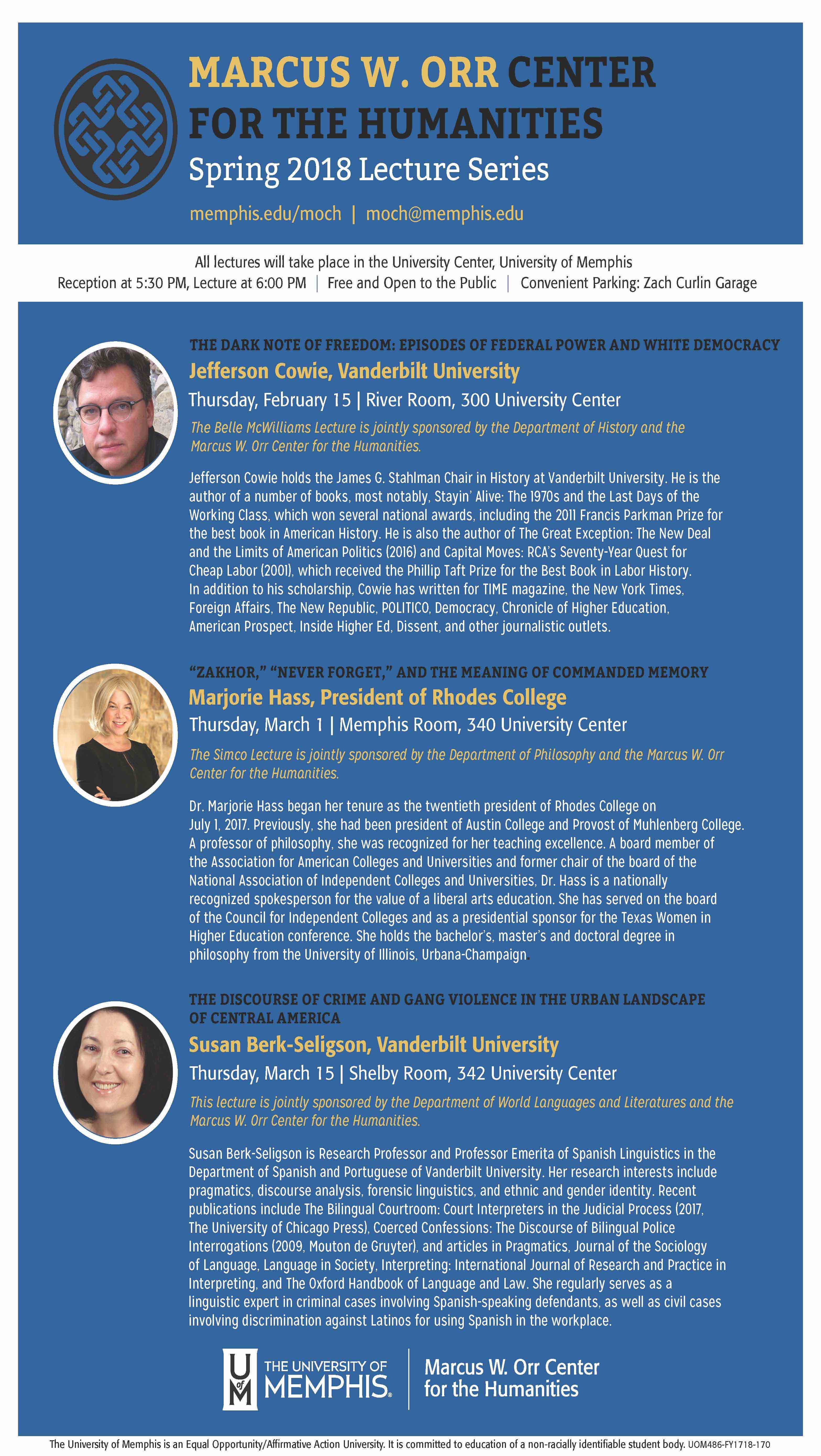 The Dark Note of Freedom: Episodes of Federal Power and White Democracy

The Dark Note of Freedom will explore the violence and power beneath one of America's most cherished ideals. Americans readily grasp the foundations of freedom in both individual rights and democratic traditions, yet we often fail to see how both these ideals are regularly trumped by a dark note in the chord of freedom: the capacity to wield power over others. Focused on one seemingly charming place in Alabama—Barbour County and its largest town, Eufaula—this talk sketches out broad-reaching commonalities in the experience of one locality as it confronts four episodes of federal intervention: Indian removal, Reconstruction, the "Age of Reform," and Civil Rights. We end with thoughts about the county's most famous son, George Wallace, and his effort to mobilize a national vision of white freedom.

Jefferson Cowie holds the James G. Stahlman Chair in History at Vanderbilt University. He is the author of a number of books, most notably, Stayin' Alive: The 1970s and the Last Days of the Working Class, which won several national awards, including the 2011 Francis Parkman Prize for the best book in American History. He is also the author of The Great Exception: The New Deal and the Limits of American Politics (2016) and Capital Moves: RCA's Seventy-Year Quest for Cheap Labor (2001), which received the Phillip Taft Prize for the Best Book in Labor History. In addition to his scholarship, Cowie has also written for TIME magazine, the New York Times, Foreign Affairs, The New Republic, POLITICO, Democracy, Chronicle of Higher Education, American Prospect, Inside Higher Ed, Dissent, and other journalistic outlets.

"Zakhor," "Never Forget," and the Meaning of Commanded Memory

From the Biblical injunction to remember (zakhor) historical events to the post-Shoah imperative "never forget," to current debates about public memorials, the psychological act of memory takes on a moral dimension. This talk will foreground this aspect of memory to ask what it means to command memory, when such commandments are justified, and how they can be fulfilled.

Dr. Marjorie Hass began her tenure as the twentieth president of Rhodes College on July 1, 2017. Previously, she had been president of Austin College and Provost of Muhlenberg College. A professor of philosophy, she was recognized for her teaching excellence. A board member of the Association for American Colleges and Universities and former chair of the board of the National Association of Independent Colleges and Universities, Dr. Hass is a nationally recognized spokesperson for the value of a liberal arts education. She has served on the board of the Council for Independent Colleges and as a presidential sponsor for the Texas Women in Higher Education conference. She holds the bachelor's, master's and doctoral degree in philosophy from the University of Illinois, Urbana-Champaign.

The urban landscape of most of Central America in the past two decades has been one of constant violence, from civil war to high crime, much of it marked by visual evidence of social disorder. Plagued by murder, extortion, and crime related to the international drug trade, the governments and communities of El Salvador, Guatemala, and Honduras lay the blame for this on youth gangs. The youths who are arrested for such crimes have been stereotyped by the ways in which they communicate, both verbally and nonverbally. Their forms of communication have included body tattoos, sign language, special calós, distinctive styles of clothing, hairstyles, kinesics, and the use of graffiti. A significant aspect of the linguistic landscape of these Central American countries is the proliferation of threats in the course of daily life. As a form of speech act, threats have particular importance in this landscape as they can, and in fact generally do, constitute language crimes. An analysis of threats reported by these Central American stakeholders reveals that threats are not homogeneous, but rather, can be classified into six types. The findings shed light on both reported speech and language crimes.

Susan Berk-Seligson is Research Professor and Professor Emerita of Spanish Linguistics in the Department of Spanish and Portuguese of Vanderbilt University. Her research interests include pragmatics, discourse analysis, forensic linguistics, and ethnic and gender identity. Her recent publications include The Bilingual Courtroom: Court Interpreters in the Judicial Process (2017, The University of Chicago Press), Coerced Confessions: The Discourse of Bilingual Police Interrogations (2009, Mouton de Gruyter), and articles in Pragmatics, Journal of the Sociology of Language, Language in Society, Interpreting: International Journal of Research and Practice in Interpreting, and The Oxford Handbook of Language and Law. She regularly serves as a linguistic expert in criminal cases involving Spanish-speaking defendants, as well as civil cases involving discrimination against Latinos for using Spanish in the workplace.