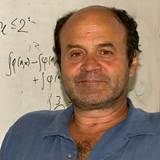 How do you pronounce my name?

How do I work?

While I have lots of unsolved problems, I prefer to pick a difficult problem, and work on it for years, if necessary. I have quite a few collaborators, and many of them are in foreign countries. In fact, ergodic theory is most popular in France, Israel and Russia.

Please help save public education. Resist corporate influence on our and your campus: taxpayers (your) money goes into private hands with no public oversight, with no input from profs. Public education was hard fought for by your great-great grandparents. Don't let corporations turn back the wheels of time claiming this is the 21st century way. Completely false. The American college system became the envy of the World when it was taken out of corporate control 150 years ago.

If you are a student and you are willing to help, please contact me by email.

The ergodic theorem in its simplest form can be described as follows.

Take a cup of water, and suppose you'd like to figure out the average speed of the water molecules. What you would have to do is measure the speed of each molecule, and then take the average of the measurements. This average, taken over all molecules in the cup, is called the space average.

The ergodic theorem says, that instead of calculating the space average, we could calculate the average speed of any single molecule. More precisely, pick any molecule, measure its speed at 1 second, 2 seconds, ... N seconds, and then calculate the average of these N measurements. If you take the measurements longer and longer, so N gets larger and larger, these averages we can call time averages get closer and closer to the space average.

The "real" ergodic theorem is much more general: it applies to any measurements made on any physical system, as modeled in phase space, and it says that the time averages get closer and closer to the space average. This unexpected theorem has two serious drawbacks when it comes to trying to apply it to practical situations. One, it doesn't tell you how long you have to take the time averages, and two, it doesn't tell you what happens with the time averages if instead taking the measurements at exactly 1s, 2s, ..., etc., you take them at more realistic times, such as random times.

One of my main research projects is to address the two problems above. Quite pleasingly, these two basic problems with the ergodic theorem led me to questions that reside in several other branches of mathematics, such as Fourier analysis, probability and number theory.

With my old Hungarian friend, Károly Oláh, we try to clarify and popularize his beautiful and fundamentally simple theory, called thermokinetics, that puts thermodynamics on entirely new foundations: finally those steam engines and other old fashioned items are replaced by differential equations — thermodynamics finally looks like a modern science.

The main idea of the description of thermodynamic systems can be easily understood — yet again by taking a cup of water. The classical theory presents an equation that describes how the water evaporates over time from the cup. Thermokinetics, on the other hand, recognizes that what we call evaporation is, in fact, the net result of two processes which we can call absolute evaporation and absolute condensation. Absolute evaporation is caused by those molecules that leave the surface of the water, and absolute condensation is caused by those molecules that enter the cup of water from the air.

These two absolute processes are dramatically faster than their net process: if you eliminated the possibility of molecules to enter the water, ie. the absolute condensation, the water would disappear from the cup in a matter of few minutes even at room temperature.

The thermokinetics description of thermodynamics via two dual processes is similar to how trade is described between two countries. The trade balance between two countries — say, the US and China — is the difference between export and import. In economics, nobody would just talk about the trade balance alone: export and import are studied separately.

The classical (macroscopic) thermodynamic theories, on the other hand, correspond, in scope, to describing only the trade balance, and ignoring the fact that it's the difference between two massive "processes", export and import.