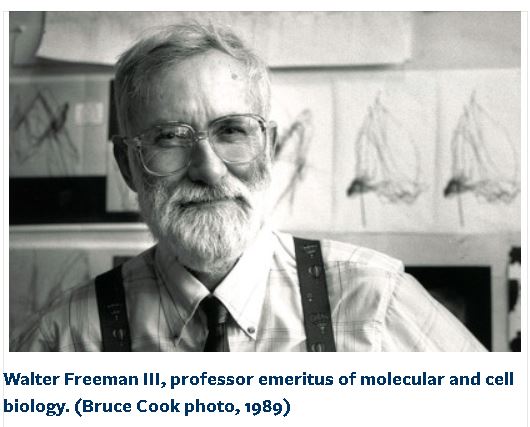 Walter J Freeman is a fourth generation physician in his family. He was born and raised in Washington, D.C. He studied physics and mathematics at M.I.T., electronics in the Navy in World War II, philosophy at the University of Chicago, and medicine at Yale University, where he received his M.D. cum laude in 1954. He continued with internal medicine at Johns Hopkins, and neuropsychiatry at UCLA. He joined the University of California at Berkeley in 1959, where he stayed for the rest of his life teaching brain science. During his years at Berkeley, he has been the Chair of the Department of Anatomy and Physiology (1967-1972), which later became the Department of Molecular and Cell Biology. He maintained very active research till the very end of his life as Professor of the Graduate School and most recently as Professor Emeritus at the Division of Neurobiology, Department of Molecular and Cell Biology.

Dr. Freeman has been an extremely influential neuroscientist. He has earned the highest respect all over the world for his revolutionary ideas on neurodynamics, which transformed the field. In many cases, his ideas have been decades ahead of the mainstream of neuroscience. He received many awards and distinctions, including the Bennett Award from the Society of Biological Psychiatry (1964), Guggenheim Fellowship (1965), the Chaire Solvay, Universite Libre de Bruxelles (1974), the MERIT Award from National Institute of Mental Health (1990), the Pioneer Award from the Neural Networks Council of the IEEE (1992), the Spinoza Lectures, Amsterdam (1995), the Helmholtz Award of INNS (2005), and Lifetime Achievement Award, University of Salerno, Italy (2012).

He was President of the International Neural Network Society (1994), President of the Pavlovian Society (1997), Life Fellow of the IEEE "For the development of biologically realistic neuroengineering models based on nonconvergent dynamics", and fellow of the International Neural Network Society. He has been Honorary Professor of Fudan University, Shanghai, and Zheijang University, Hangzhou, China. He has authored over 500 articles and 6 books: "Mass Action in the Nervous System" 1975, "Societies of Brains" 1995, "Neurodynamics" 2000, "How Brains Make Up Their Minds" 2001; and "Imaging Brain Function with EEG" 2013 (with Rodrigo Quian Quiroga), and "Cognitive Phase Transitions in the Cerebral Cortex" 2016 (with Robert Kozma).

Professor Freeman had a pivotal role in the interface between computational neurobiology, mathematics, and neuroengineering. His most significant contributions have been the discovery and modeling of the nonlinear dynamical oscillations utilized by vertebrate brains to create perception. He has measured in animal sensory cortices the neural activity patterns and shown that perception occurs by the construction of spatial patterns of oscillations in the gamma range. One of the key features of these discoveries lies in the mathematical and engineering models utilized in the analysis. His 1975 book on the Mass Action in the Nervous System predated the interest in chaos theory to explain brain function, and it is still today the best prototype of a successful integration of circuit theory mathematics with the physiology of neural assemblies. Based on his decade-long physiological observations, he has modeled brain dynamics in a long list of seminal papers spanning over 40 years, using arrays of nonlinear oscillators called now Freeman Katchalsky (K) sets. He has shown that solutions are governed by a landscape of chaotic attractors, each corresponding to a class of learned stimuli, thus solving the problem of generalization over equivalent stimuli. He has shown that the code consists of repetitive frames of spatial amplitude modulation of a common aperiodic carrier wave, that this code holds for all senses, and that convergence into limbic cortex with spatiotemporal integration enables the formation of multisensory Gestalts.

This body of data and theory provides the most advanced model to date of the neurodynamical mechanisms that support cognitive functions in animals and humans. Dynamics have been employed in machine learning before, but Dr. Freeman's work goes far beyond those developments. He proposed non-convergent (chaotic) dynamics to model the interface between brain states and the external world. Following Von Neumann's question on the language of the brain, Freeman's vision opens up new theoretical and practical avenues for computational and engineering implementation of intelligent systems and for developing novel experimental approaches to neural correlates of consciousness. His recent work provides breakthroughs in understanding the intentional action-perception cycle, and the cinematic theory of cognition through intermittent phase transitions, which can be modeled using tools of Quantum Field Theory and random graph theory. He has produced highly influential results covering philosophical aspects of intentionality and consciousness, and the unity of matter and mind.

He was preceded in death by his wife, Do (Doreliesje) Freeman, and is survived by seven children -- Luke of Australia and Abigail, Mathew, Walter IV, Rachael, Joran and Jennifer of the United States – five step-children – Mark, Tom, Kim, Rachel and Toni of the U.S. – and his first wife, Maribelle Zechlin.