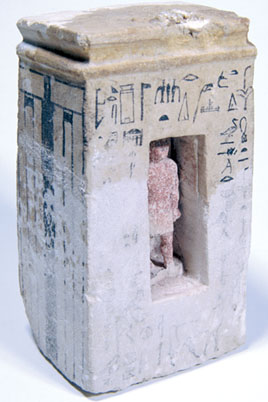 This False Door Shrine belongs to the "Overseer of Cattle, Yegegi." The small statue in the niche depicts Yegegi emerging into the world of the living so that he could enjoy the offerings left for him. Painted around the niche is an offering prayer that would magically provide for the needs of the deceased in the hereafter for eternity. His name and title, indicated by the image of a cow on the lower right, preserved his identity. The sides and back of the shrine are painted with the niched façade design used in ancient Egyptian false doors and tomb exteriors. Because shrines are typically used to house a god or deify a king, this piece may be representing a free-standing false door rather than a shrine.

This shrine was carved from a single piece of limestone, though the statue inside was carved separately and then secured in place with an adhesive. The statue depicts a striding man wearing a short kilt holding two shortened staffs in his hands, which may be designating his office. There is evidence of a pillar along the back of the statue, which indicates that the statue was not of Yegegi when he was alive, but as a ka-statue. A ka-statue served as a reserve body for the deceased's spirit or ka to live in it.

In the Old Kingdom, tombs were typically a rectangular-shaped building with an offering area and an underground burial chamber called a mastaba. False doors are frequently found in mastabas often on the west wall of the offering chamber. A false door served as a doorway between the land of the living and the land of the dead. More well-equipped mastabas might contain one or more offering rooms or niches with associated false door(s) and serdab chamber(s), as well as storerooms. Yegegi's shrine was intended to serve as a substitute piece of funerary equipment in case the tomb was damaged.

Check out Dr. Joshua Roberson's 3D images of the shrine on SketchFab!

Igeg shrine by IEAA on Sketchfab