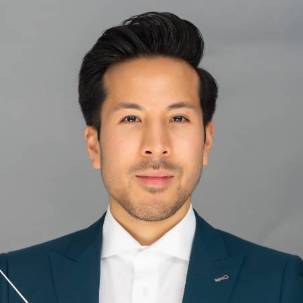 Conductor-teacher Francis Cathlina, D.M.A., is a Vietnamese-American whose career is compelled by the shared human experience of connection. His Eastern heritage shapes his work: he builds community and efficacious leaders through choral artistry.

Currently, Dr. Cathlina serves as the Visiting Director of Choral Activities at the University of Memphis. He conducts the University Singers and Mazi, the treble choir; he teaches graduate and undergraduate conducting; and he guides a comprehensive Choral Department of five ensembles through administrative leadership and vision. Prior, he directed the Tenor/Bass Choir and taught conducting and music education courses at the University of North Texas as a doctoral teaching fellow.

Ensembles supported by Dr. Cathlina’s direction sing to inspire through innovative programming, enhanced by the practice of Choregie. During his tenure at Centennial High School, the A Cappella Choir was nationally recognized as 3rd place in The American Prize for Choral Performance.

As a first-generation musician, Dr. Cathlina exemplifies a peerless work ethic, and he strives to instill this in all mentees. Former students describe their experience of him, highlighting his “high expectations, enthusiasm, and passion for not only teaching but for caring about every one of his students.” While at UNT, the American Prize in Conducting recognized Dr. Cathlina as a National Finalist in the College/University Division for his work with the UNT Tenor/Bass Chorus. In addition, his work in the Southwestern ACDA Graduate Conducting Competition garnered him 2nd place both times he competed. Early in his career, he was designated the “Young Director of Distinction” by the Texas Choral Directors Association (TCDA).

Dr. Cathlina’s scholarship focuses on conducting and vocal pedagogy in choral rehearsals. In summer 2021, the American Choral Directors Association’s Choral Journal published his two-part article “7 Essentials for Developing Voices in Choir: Part I” and “Part II.” Additionally, he serves the profession as adjudicator and coordinator and regularly presents interest sessions throughout the United States. He is an invited presenter for Southwestern ACDA (SWACDA) and Illinois Music Educators Association in 2022.

Dr. Cathlina holds a Doctor of Musical Arts degree in choral conducting with a vocal pedagogy cognate from the University of North Texas, a Master of Music in choral conducting from Michigan State University, and a Bachelor of Music Education from Baylor University. Prior to his doctoral studies, he enjoyed a varied career as a public school teacher, working with elementary through high school-aged singers with diverse backgrounds. Dr. Cathlina lives in Memphis, Tennessee with his husband, Kyle, and their dog, Coco.

Dr. Alexander Lloyd Blake works as an award-winning conductor, composer/arranger, vocal contractor, singer, and music activist. Named Musical America’s 30 Professionals of the Year in 2019 and the Louis Botto Award for Innovative actions and Entrepreneurial Zeal from Chorus America, Blake was recently featured in both the NY Times and LA Times for work in diversity and anti-racism within classical music.

Blake is the Founding Artistic Director of Tonality, an award-winning choral ensemble focused on spreading a message of unity, peace, and social justice through a culturally diverse choral setting. He also serves as the Choir Director at Los Angeles County High School for the Arts (LACHSA). He also serves in Los Angeles and New York City as a Principal Associate Conductor of the National Children’s Chorus. As an arranger, Blake’s “Wade in the Water” was a featured arrangement at the North Carolina Music Educators Association convention in 2013 and is published with Santa Barbara Music Publishing. His arrangements of “Deep River” and “Poor Wayfaring Stranger” are published by Alliance Music Publishing and Walton Music Publishing, respectively.  Other musical activities include an opera conducting premiere at the 2019 Prototype Festival in New York City and preparing choirs for live performances with UCLA Center for the Art of Performance.

Recent film and TV credits include singing on the soundtrack of Jordan Peele’s “Us”, Disney’s “Lion King”, and Pixar’s “Spies in Disguise.” Blake also worked as the choral contractor and vocal arranger for Andy Grammer’s performance at the 2019 ARDYs (Radio Disney Awards). Blake recently prepared singers for the 2020 Grammy Awards and performed at the 92nd Academy Awards.