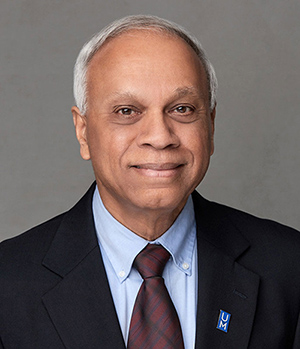 Dr. Sajjan Shiva joined University of Memphis (UofM) in 2002 as the Director of the Computer Science Division (part of the Department of Mathematics at that time) transitioning it to the Department of Computer Science (CS) in 2005 and served as the founding chair until 2015. Prior to joining UofM, he served as the technical program manager for a large consortium of industries for automatic design of Ships, funded by the US Department of Defense (DoD), as the manager of software quality assurance for a large missile defense project, and as the technical advisor to the advanced technology laboratory of the Strategic Defense Command. He was on the CS faculty of the University of Alabama in Huntsville, served as Department Chair and attained the Emeritus Professorship. He also served on the CS faculty at Alabama A&M University. He is an IEEE Fellow (the highest honor from the professional society).

Shiva has conducted research in the areas of computer architecture, distributed systems, software engineering, artificial intelligence and knowledge engineering and computer systems security. His research activity started in the area of computer aided design of hardware systems. He developed programs to design hardware from a high level functional description of the systems. His work on hardware description languages and automatic synthesis supported programs at NASA. He extended this work to utilize artificial intelligence techniques. This led to the development of knowledge representation and search schemes. He applied these knowledge engineering techniques to software re-use. His work was recognized by the US Department of Defense and NASA.

Shiva’s work has been funded by NSF, NASA, DoD, Office of Naval Research (ONR) and the Department of Homeland Security (DHS/AFIT).

He collaborated with MIS and EECE departments to establish the Software Testing Excellence Program (STEP) program at UofM. This program is supported by and serves FedEx and other industries. As the Director of the Game Theory and Cyber Security laboratory (https://gtcs.cs.memphis.edu) of the Department of Computer Science at UofM, his current research is focused on security and privacy of computer systems and applications, and software engineering of artificial intelligence systems.

Dr. Shiva has guided 21 doctoral students (11 at UM) and is currently guiding 2. His publication list includes 160+ Conference and Journal articles. Based on his teaching courses on computer systems architectures, he has authored four books, which have seen 11 editions including one in Spanish. His books are used in 120+ universities in USA, Canada, China, India, Australia, Spain, Iran and other countries.