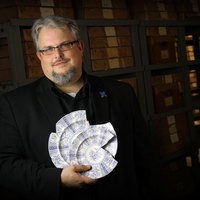 Dr. Jamie Brandon's journey into anthropology began many years ago. He entered U of M (then Memphis State University) a music major, but after discovering anthropology his first semester he never looked back. Dr. Brandon studied both cultural anthropology and archaeology, combining his interests in both fields with several field experiences, including employment as an undergrad with The Tennessee Division of Archaeology and Panamerican Consultants. He attributes much of his success as a student to the high level of support he received from his professors. "One of the things I say about my undergraduate program is I got a lot of hands-on interaction...That was valuable to me."

After completing his bachelor's degree, Dr. Brandon went on to complete post-graduate work at both the University of Arkansas and the University of Texas at Austin. While those experiences have been invaluable in their own right, Dr. Brandon feels that his undergraduate experience greatly informed the directions he would later go. He felt encouraged and pushed by his professors to pursue joining research projects in whatever way he could. "Because of that, I really knew how to do research which I don't think a lot of other people, undergraduates get in other programs."

Today Dr. Brandon splits his time between teaching and conducting archaeological research. His expertise is on historical archaeology of the 19th century US South with a focus on the dynamics of class, race, and gender. Reiterating the value he places on his undergraduate experience in laying the foundation for his current career, Dr. Brandon believes, "I wouldn't be the archaeologist I am, the anthropologist I am, if it weren't for that program."

When recruiting new students, Dr. Brandon looks for people who have "at least gotten a little bit of their hands dirty with some research," even if only in a supporting role. He wants to see initiative and encourages current students to "just get out there and do some stuff" and to "Go for it. Whatever it is just try to get some hands-on [experience] out there."