The Mississippi embayment (ME) is the youngest of a series of intracontinental basins in the central United States. It is a SSW-plunging sedimentary basin and a first-order feature in North American Geology. 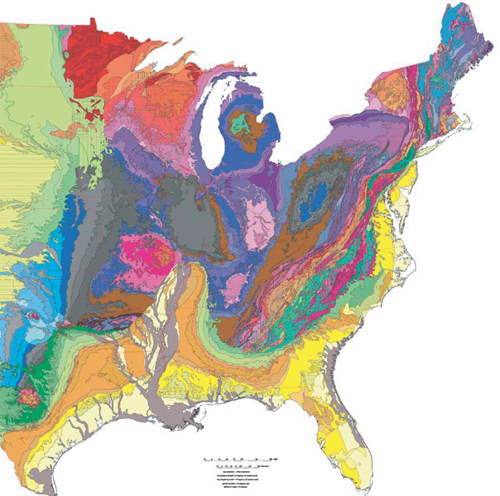 The ME is filled with unconsolidated Upper Cretaceous and younger sediments and is underlain by the Reelfoot Rift, an ancient failed arm related to the breakup of the super continent Rhodinia in Cambrian time. The broader Reelfoot Rift encompasses the smaller Mississippi Valley graben (MVG), which contains the New Madrid Seismic Zone (NMSZ).

The NMSZ generated at least three earthquakes in 1811-1812 exceeding moment magnitude 7.0 and paleoseismology indicates that at least five episodes of large earthquakes capable of producing wide-spread liquefaction occurred in the NMSZ over the past 5000 years.

The ME may be the most recent expression of tectonic activity associated with the region; previous interpretations of potential field data and active source reconnaissance seismic refraction/reflection experiments suggest significant crustal heterogeneity beneath the embayment related to a long and complex geological history of rifting, uplift, and subsidence covering at least two Wilson cycles.

Several models have been suggested for ME subsidence and for the generation of earthquakes in the NMSZ but none has gained wide acceptance. We lack fundamental knowledge of how upper crustal phenomena relate to deeper crustal and mantle processes that undoubtedly exert significant control on regional subsidence and earthquake occurrence. The passage of the EarthScope TA provides a unique opportunity to test our hypothesis that lithospheric heterogeneity ultimately controls the dynamic processes associated with the ME and the NMSZ.

More specifically, we hypothesize that the mantle lithosphere contains anomalous heterogeneity related to buried Phanerozoic rift geology. Crustal rifting may have affected the entire region presently buried beneath the northern ME but interpretation of potential field anomalies suggests that the rifting was not accompanied by voluminous magmatic intrusions. This contrasts sharply with older intracontinental rifts such as the Midcontinent or Keweenawan rift system in which large volumes of mafic rocks were intruded along much narrower grabens.

Comparing the lithospheric structure inherited from rifting below the ME to lithospheric structure currently under investigation below the Midcontinent Geophysical Anomaly (MCGA) related to the Midcontinent rift will expose the range of mantle dynamic processes associated with continental rifting and may shed light on why some ancient rifts reactivate and generate earthquakes while others do not. (See map above).

We will illuminate the dynamic processes associated with the ME and NMSZ by determining crust and mantle velocity and anisotropy structure within and outside of the embayment. The Northern Embayment Lithosphere Experiment (NELE) will consistent of TA densification over a broad region to improve resolution of compressional and shear wave velocity models. We will employ a relatively new joint inversion technique that uses gravity data, transfer functions (similar to receiver functions), and source and ambient surface wave dispersion measurements to constrain shear velocity.

Denser TA coverage along two embayment perpendicular and one embayment parallel line will provide more finely detailed crust and upper mantle structure through both currently aseismic and seismogenic crust. Traditional receiver function techniques will be replaced with a newly developed transfer function method that will allow us to "see through" the thick unconsolidated sediments in the region. Core phases, surface wave dispersion, and gradiometry will provide anisotropy images over a range of depths.

Finally, we will image the lithosphere/athenosphere boundary using Ps and Sp conversions. Joint interpretation of these images, generated using traditional and new techniques, should help unlock the enigma of the NMSZ and reveal how ancient tectonic events continue to influence the present via inherited lithospheric structure.