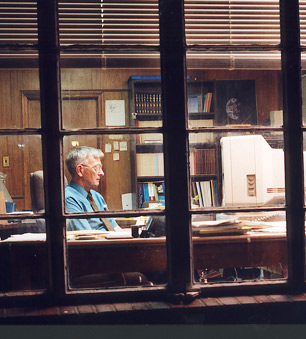 Jim Dorman's work at Lamont Geological Observatory (now Lamont- Doherty Earth Observatory) began with marine geophysics in 1951. After 1953, his research dealt with exploration of the earth's crust and deep interior by means of low frequency seismic surface waves. He also took part in microearthquake field studies. In 1969 he joined the Lamont-MIT team conducting the Apollo Lunar Seismic Experiment at the Johnson Space Center, working until 1981 on lunar seismology and lunar structure.

From 1964 until 1972, Dr. Dorman served as Assistant Director of Lamont-Doherty, and from 1972 until 1981 as Professor of Marine Studies at the University of Texas Geophysics Laboratory in Galveston. In 1981, he went to Exxon Production Research Company, Houston, where he worked on development of land seismic exploration technology.

In 1987, Dr. Dorman joined CERI as Associate Director, and in 1992, he became Executive Director. His current research deals with propagation of low-frequency seismic waves in the Mississippi embayment basin, with the structure and physical properties of the basin sediments, and with their response to seismic shaking.

Dr. Dorman retired as the CERI Associate Director in June of 1998, and now serves as Emeritus Faculty.