Our research involves areas of inorganic, organometallic, bioinorganic chemistry and chemical biology, with particular interest in the design and engineering of models for the oxygen-evolving center in photosystem II, through either synthetic methods using organic ligands or biosynthetic approach using small, stable and well-characterized proteins. These synthetic systems will be subjected to a variety of spectroscopic, structural characterization, reaction mechanism and activity studies to evaluate the properties and applications of these synthetic molecules.

Biomimetic Studies of the Oxygen Evolving Center in Photosystem II

The search for a clean and renewable source of energy is one of the most urgent challenges in the 21st century. Among other sources of energy alternative to fossil fuels, sunlight may be the ultimate way to solve the current energy problem. Nature converts and stores solar energy through the well-known photosynthesis process, where carbon dioxide and water are converted into carbohydrates and oxygen. During photosynthesis, the oxidation of water to release O2 is catalyzed by the oxygen-evolving complex (OEC) of photosystem II (PSII). A number of mechanisms have been proposed to elucidate the details of oxygen evolution in native PSII, such as the formation of O-O bond from a nucleophilic attack of water or hydroxide on a high valent Mn=O species or a manganese oxyl radical species. 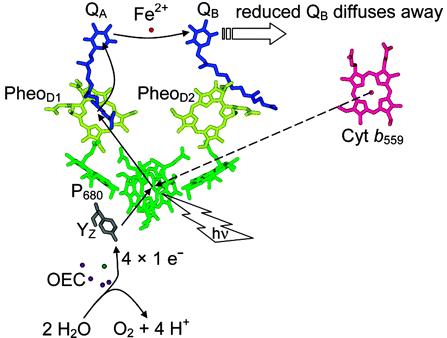 The design of artificial catalysts for water oxidation represents a critical step in the conversion and storage of solar energy.

In natural photosynthesis, the conversion of light energy to chemical potential starts from a charge separation process occurring at the P680 Chl a in the reaction center, producing the strongest known biological oxidant, an oxidized charged radical P680+∙, which can oxidize the OEC via a redox-active tyrosine residue D1-Tyr161 to achieve sunlight-induced water oxidation.
The major goal of artificial photosynthesis is to convert sunlight into high-energy chemicals, such as H2, from water oxidation. The successful capture, conversion and storage of solar energy require the design of artificial systems that can efficiently absorb sunlight, and create a charge separation to drive the oxidation of water. Although the creation of light-induced charge-separated state and electron transfer from various electron donors to electron acceptors have been reported, the coupling of efficient water oxidation catalysts to photoactive chromophores to realize light-induced water oxidation remains to be one of the greatest challenges in artificial photosynthesis. Our research aims to design photocatalysts to achieve light-induced water splitting, through the attachment of  light-harvesting groups, such as ruthenium bipyridine complexes, to water oxidation catalysts in the presence of electron acceptors.

The proper spatial arrangement and chemical environment of the sensitizers, electron arrays, and catalysts are critical for the successful function of natural photosystems. Engineered proteins have been used as model systems to study the electron transfer events in native proteins and it has been shown that protein framework plays a major role in controlling electron transfer and charge separation. Proteins with known x-ray structure and high stability offer a great chance to construct all the essential components of artificial photosynthesis in a specific order and spatial arrangement.
Through site-directed mutagenesis or covalent attachment, water oxidation catalysts, light-harvesting groups and electron acceptors could be incorporated into a protein scaffold to investigate how the spatial arrangement of these components will affect the energy and electron transfer process, thus providing guidelines for the design of better photocatalysts for water oxidation.
Dr. Zhao's Group. Department of Chemistry, The University of Memphis | 213 Smith Chemistry Bldg, Memphis, Tennessee 38152-3550