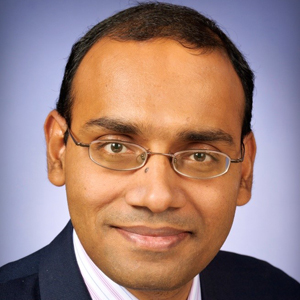 Dr. Santosh Kumar joined the Department in Fall 2006 after completing his Ph.D. at The Ohio State University, where his dissertation was selected for the Presidential Fellowship award. In 2010, he was selected as one of America's ten most brilliant scientists under the age of 38 (called the "Brilliant Ten") by Popular Science magazine, becoming the first person in the Mid-South region to receive this honor. At the University of Memphis, he received an Early Career Research Award in 2008 and the Faudree Professorship in 2011.

Dr. Kumar leads large multidisciplinary research grants in the area of mobile health, sponsored by the National Science Foundation and National Institutes of Health and spanning multiple universities (including CMU, UCLA, Georgia Tech, UMass, Ohio State University, University of Minnesota, and University of Pittsburgh). His research team seeks to revolutionize the research and practice of healthcare via evidence-based innovation in wearable sensing and mobile phones. Dr. Kumar's research works consistently appear in the world's premier publication venues in sensor design such as ACM MobiCom, ACM SenSys, and ACM IPSN. His publications are also widely cited, earning over 1,700 citations at an average citation of 40 per article.