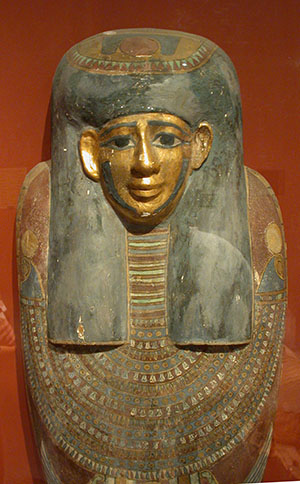 Mask, Chest and Plates: cartonnage, painted and gilded (mask only)

The name Irtw-irw (literally read Iret-Irw) means "[their] eyes are against them," that is, "the eyes of the gods are against one's enemies." His mummified body reminds us of the importance of mummification in ancient Egyptian funerary beliefs. The head and toes of the mummy were unwrapped before it came to the University of Memphis.

Irtw-irw's mask would have been positioned directly over the face and upper chest of his mummy after it was placed in the coffin. The mask depicts the facial features in a traditional manner. The features are not individualized to look like Irtw-irw but depict him as an idealized, semi-divine being. Note that the mask is similar to the gilded face on the coffin lid. The color symbolism on both is significant. According to ancient Egyptian belief, the gods had flesh of gold and hair of lapis lazuli (a dark blue semi-precious stone). Irtw-irw's face is gilded and his hair painted a deep blue color, suggesting that at death, he could become like a god.

Irtw-irw's coffin lid is decorated with many images that are derived from the "Book of the Dead," which is a series of spells to help the deceased successfully negotiate the journey through the underworld to the next world or the land of Osiris. Painted on top of his wig is an image of the sun rising over the horizon, the hieroglyph for rebirth. On either side are baboons with upraised arms, heralding the rising sun. A multi-colored collar decorates Irtw-irw's chest. Below this pectoral is an image of a goddess, possibly Maat, the goddess of truth and order or Nut, the sky goddess who gives birth to the sun's disk each morning. She wears the sun disk on her head, and her arms extend above her wings which wrap protectively around the mummy. In her hands are feathers, symbolic of truth. The deceased had to have his heart weighed against a feather of truth in his last judgment. If his heart was "heavy" with misdeeds, then it was eaten by a monster name Ammit. If, however, his heart was "as light as a feather," the deceased entered into the kingdom of Osiris.

Below the image of the goddess is a lion bier (bed) on which the mummy is outstretched. The bier is flanked by images of Isis and Nephthys. Isis, the wife of Osiris and goddess of magic, is on the left and wears on her head the hieroglyph for her name, the throne symbol. Nephthys, the sister of Isis and the protectress of coffins and canopic jars, is on the right and wears on her head the hieroglyphs for her name. The ba bird (an aspect of the soul of the deceased) hovers above the bier, while the four canopic jars which contain and protect the internal organs are underneath it. Below this scene are figures with feathers of truth in their hands.

Below this panel are three columns of a hieroglyphic text that is flanked by four anonymous figures of seated divinities, each with a feather of truth on their knees. These, in turn, are flanked by two cobras resting atop papyrus columns. The one on the right wears the crown of Lower Egypt and the one on the left the crown of Upper Egypt. The protective serpents also appear on the sides of the lower part of the coffin. On the feet of the coffin lid (placed upside-down to us, but so that Irtw-irw could see them) are two images of the jackal god Anubis (or possibly Wepwawet), a funerary god, reclining on a shrine representing the tomb. The name of Irtw-irw is written above the head of each figure.

The chest and legs of Irtw-irw are covered with two separate plates of linen cartonnage. The mask was made of the same material. Cartonnage is made of layers of gesso and linen or papyrus. When wet, it could be easily molded to the shape of the mummy and, once dry, it created a smooth, light-colored surface which was readily painted or gilded. Irtw-irw's chest plate has a winged solar disk flanked by uraei (rearing hooded cobras) above a broad collar with falcon terminals. The leg plate has a winged goddess similar to what is seen on the lid of the coffin. A brief band of text down the center includes an offering formula and his name. The background has another broad collar and the sides depict the Four Sons of Horus. The coffin bottom, called the "trough" is decorated with tall cobras, one wearing the crown of Red Crown of Lower Egypt and the other the White Crown of Upper Egypt.

In 1987, Irtw-irw spent the day in the hospital while a team from the University of Tennessee Medical School examined him. He went through a C.A.T. (computer-assisted tomography) scan, and pathologists closely examined him. An E.N.T. (ear, nose and throat) specialist looked inside Irtw-irw's head with sophisticated equipment. The latter exam, along with the C.A.T. scan, indicated that Irtw-irw had an ear infection that may have invaded his brain. The hole on the right side of his head happened after he died. Irtw-irw turned out to have been younger than expected. He died at about 30 years of age.

Corcoran, Lorelei H. "The Mummy, Cartonnage Set and Coffin of Irtwiw." In Egyptian Museum Collections around the World, I. (Cairo: The American University of Cairo Press, 2002), 231-242.