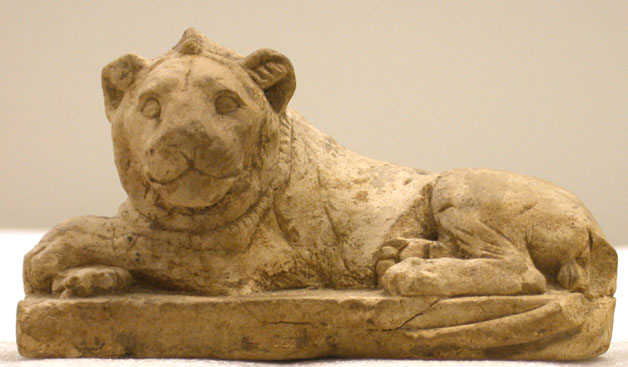 This lion statuette lies in a relaxed pose with its paws crossed and breaks the usual position of an Egyptian lion or sphinx. It was carved from a single piece of limestone and could have been originally painted.

Lions were abundant in Egypt in both the prehistoric and historic periods, found roaming the semi-desert regions on either side of the Nile Valley. They began to disappear during the New Kingdom (c. 1550-1070 B.C.) and eventually became extinct in Egypt. Depictions of pharaohs hunting lions though are extremely common. There also is evidence that some pharaohs, like Ramses II, kept lions as pets.

The reclining lion could be seen as a guardian figure since the ancient Egyptians believed that two lions guarded the horizons where the sun rose and set. Large-scale figures of lions were often placed at the entrances to temples. It could also be a symbol of the king himself, representing his power. Models like this are typical of the Late Period through the Ptolemaic Period and were likely votive pieces offered to temples in cities like Leontopolis, the "City of Lions" (Tell-el Muqdam).

Check out Dr. Joshua Roberson's 3D images of the lion on SketchFab!

Lion in repose by IEAA on Sketchfab