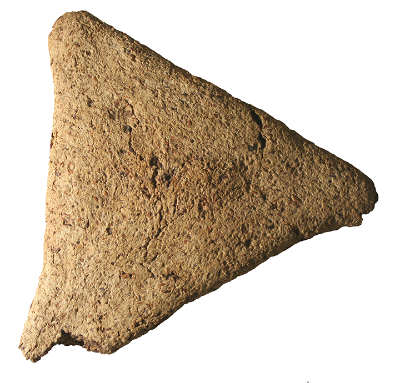 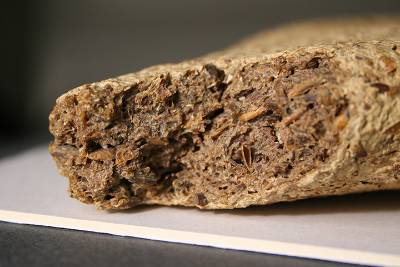 This loaf of bread is approximately 4,000 years old. It was placed with other objects either within or under the foundation for Mentuhotep II's mortuary temple at Deir el Bahari in Western Thebes. The objects placed in foundation deposits for ancient Egyptian temples were intended to symbolically stabilize and protect the four corners and the boundary walls of the temple. This was because the temple itself was believed to be a microcosm of the universe.

King Mentuhotep II succeeded in reunifying Egypt at the end of the First Intermediate Period, a period of decentralized power that separates the Old and Middle Kingdoms. His reign of about fifty years saw the resurgence of a sophisticated art style.

During the bread-making process, the grinding of flour and the mixing of dough, the ever-present sand and even small stones, became part of any bread that was made, whether for offerings or domestic use. These gritty elements wore down the enamel of the teeth which led to abscesses. Cavities, caused today by refined sugar and soft foods, were not the culprits in tooth loss in ancient Egypt.