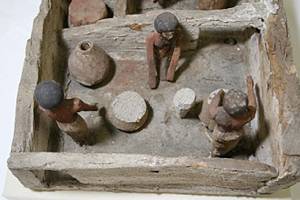 Model scenes of daily life activities were popular for use in tombs during the Old and Middle Kingdoms. They complimented the paintings of similar scenes on the walls of the tombs. It is interesting to note that in the Late New Kingdom, wall paintings and statuary with a religious, rather than an everyday emphasis, were preferred.

A granary is a storehouse for grain. The grain was stored until it was ground into flour and used to make bread. The men in this model granary perform various functions. In the larger room, a man delivers threshed grain to a kneeling man who grinds it. Another man standing in this room packs flour in a storage container. In the smaller room, a seated supervisor watches as a worker places flour in large storage jars.

The figures are painted reddish-brown, the traditional skin color for men in Egyptian art. They also wear long linen kilts. The carving is rather crudely executed, and the long arms are out of proportion with the rest of the body; nevertheless, the sense of action generated by the figures creates a lively scene.