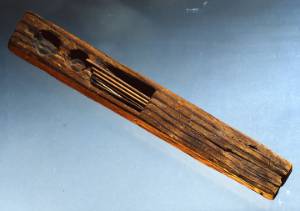 Scribal palettes like this are the main tool of an Egyptian scribe and would be used to write on papyrus or stone. These tools contain two inkwells and a slot to hold reed pens. Dried ink cakes were left in the ink wells and contained black and red ink. To write, a scribe would chew on the end of the reed pen to create a paintbrush, dip it in water and rub the ink cake. Black ink was used for writing text and red ink was used for titles or corrections. Scribes were trained in hieratic, a cursive form of the more monumental hieroglyphic script. Most Egyptian could not read or write, so scribes were automatically at a higher status than most Egyptians.

This scribal palette was found in the tomb S.F. 170 in Sheikh Farag which is part of Naga ed-Deir cemetery, across the Nile from Abydos. The tomb was excavated by George Reisner in 1913 in a joint excavation with Harvard University and the Museum of Fine Arts in Boston. The tomb is located on the west slope of the hill on the eastern end of the cemetery. It had three rooms in the chapel and two shaft burial chambers. The tomb was most likely looted in antiquity, so the remains of the tomb were scarce. An inscribed box fragment, pieces of mummy cartonnage, a wooden ear of a mummy, one complete model boat and the remains of three other sets were found in the tomb, along with the scribal palette. Amulets, a shabti, remains of pottery, garnet, faience, carnelian and amethyst jewelry, Ka statues, and four human skulls were found indicating that there was possible a range of people buried in the tomb.

This palette is unique in a variety of ways. It is significantly shorter in length than other scribal palettes only extending 20.5 cm, or 8 inches long. The slot for the reed pens was cut from the side and then filled with another piece of wood. Most of these slots are cut from the top of the piece, but this method allows a seamless look from above. The palette contains four reed pens, one which is spilt and may have black ink on the top. The ink cakes are missing but the wells have remnants of the black and red ink cakes.

Check out Melissa Thiringer's video about this palette on Youtube!