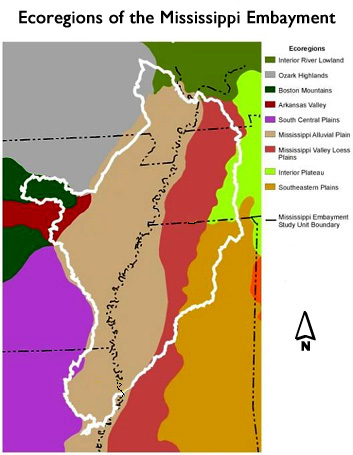 Nearly all of the upland natural vegetation in western Tennessee is part of the Lowland or Submontane Cold-Deciduous Forest (sensu the National Vegetation Classification System, Weakley et al. 1988). Lowlands include Temporarily Flooded, Seasonally Flooded, Semipermanently Flooded, and Saturated Cold-Deciduous Forest. There are also plantings of Pinus taeda and Pinus echinata, and various crops such as cotton and soybeans. In addition, there occur several fallow fields dominated by herbaceous flora, made up of various perennial forbs and grasses. Finally, several exotic species, mainly Pueraria montana and Microstegium vimineum, are increasing their extent.

Delcourt et al. (1993) describe the vegetation and anthropogenic cultures of the southeastern United States. During the full glaciation, ca. 18,000 years before present (BP), Picea and Abies species dominated the Mississippi alluvial valley, while the adjacent uplands were dominated by a mixed forest reminiscent of the contemporary northern forests. The Hysithermal (ca. 3,500 – 8,000 years BP) during the Holocene was a warm, dry period, rendering open park-like upland oak forests and restricting the mesophytic flora to riparian zones. Early explorers described large, widely spaced trees with an abundance of cane (Arundinaria gigantea) in the understory in the loess hills. Remnants of the once vast ?canebrakes? still exist in small patches. A variety of oak forests and woodlands dominated the interior uplands. Riparian zones were dominated by swamp forest (Taxidium distichum and Nyssa aquatica) and bottomland hardwoods. The onset of European settlement led to the demise of many forests for agriculture and various products such as railroad ties. In addition, the use of fire practiced by Native Americans was suppressed leading to the closing in of forest canopies.

Braun (1950) classified western Tennessee uplands (the Tennessee Plateau) as Western Mesophytic, a cross between the Mesophytic vegetation to the east and the drier oak forests to the west. Küchler classified the uplands as oak-hickory. The dominance of oak, especially, is common on the uplands, with Quercus alba being the most common and ubiquitous (Bryant et al. 1993). Many of these upland forests are currently succeeding due to two phemomena: 1) forest canopies have closed since European settlement and this has led to a regeneration of only shade-tolerant species, e.g., Acer saccharum and Fagus grandifolia, and 2) forests recovering from disturbance in the late 1800s are losing species of the black oak group as they reach their maximum age. The Loess Bluffs are particularly interesting because of the variety of flora with a mix of northern species such as Tilia americana and Magnolia spp. The loess hills and adjacent lowlands have been suggested as an importnat migratory route and refugia during Pleistocene glaciation (Delcourt and Delcourt 1975).

The lowlands and area adjacent to the Mississippi River is part of the Southern Floodplain Forest (Küchler 1964). These forests include bottomland hardwood forests and deepwater alluvial swamps that are part of the riparian zone rivers and streams (Sharitz & Mitsch 1993). The bottomland forests of the eastern United States, generally restricted to the Coastal Plain province, are both economically and ecologically important. The bottomland hardwood forests consist primarily of flood plains adjacent to rivers and streams, but also include poorly drained areas. There are a large number of species found in this system. The major site types are the first bottoms, which are periodically flooded, and the second bottoms, which no longer flood periodically.

Within the bottoms, due to the past meandering of the main channel and its tributaries, occur secondary site types due to micro and meso-topography: ridges, flats, sloughs, and swamps. A typical profile of a southeastern bottomland ecosystem shows the importance of microtopographic variation, resulting in dramatic changes in vegetation with sub-meter changes in elevation. The importance of the topography is directly related to the mean depth of the water table, and thus the growing conditions for various tree species (Robertson et al. 1978). The wetlands have long acted like a buffer, mitigating the effects of upland activities (e.g., fire and cutting) on adjacent river and stream systems by catching nutrients and eroding sediments (Sharitz and Mitsch 1993). However, many of these forests have been converted to farmland.