Fractional Calculus is the area of analysis that considers the possibility of fractional ordered derivatives and integrals of functions, the foundations of which were laid down in the early 19th century by Liouville.

A fractional time derivative, for example, takes the form:

where α need not be an integer, but any real number.

Recently, Fractional Calculus has been applied to a variety of physical phenomena, including anomalous diffusion, transmission line theory, and problems involving oscillations. 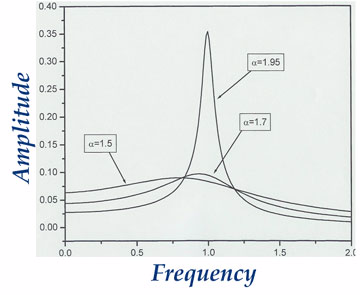 Above: Shown is the amplitude of a forced fractional oscillator as a function of frequency where α = 2 corresponds to the harmonic oscillator. Unlike harmonic oscillators, the finite peak is intrinsic and not due to external damping. Notice that resonance does not occur at the forcing frequency. 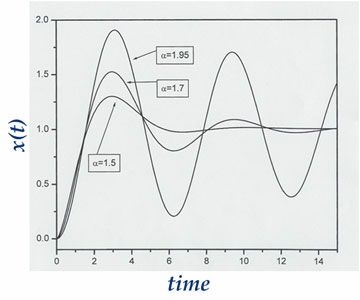 Above: The displacement of a fractional oscillator as a function of dimensionless time. Notice the decay in the displacement despite the absence of an external damping force. 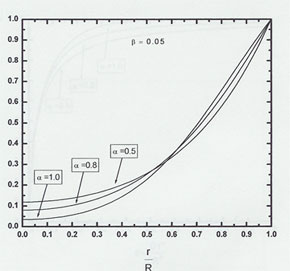 Above: The exact solution of the concentration profile of a solute diffusing anomalously inside a sphere. This profile is obtained from solution of a fractional diffusion (heat) equation in a sphere.