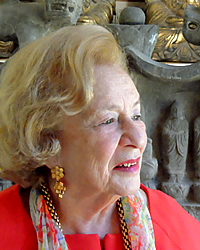 Honey Helen Scheidt is a leader in our community. She is a Board Member of several community organizations, including the Board of Memphis Library, Board of Germantown Performing Arts Center, Board of Boston Museum of Fine Arts in Egyptology, Board of Georgia Museum of Art and serves on the Foundation Board Memphis Public Library. In addition, she is a huge part of the Rudi E. Scheidt School of Music and an Art Sponsor for the Chair of Excellence at our University, The University of Memphis.

She has served on several boards throughout her career. Some of which include the Dixon Gallery of Art, Memphis College of Arts, World Literacy Foundation, Memphis in May and the Rock and Soul Museum.

Honey has received many awards and recognition for her service. She received the Humanitarian Award of National Council for Christians and Jews in 1999 and the Tennessee Governor’s Art Leadership Award, joint with Rudi E. Scheidt in 2001. She also received awards from the Memphis Music Commission, Liberty Bowl, Germantown Performing Arts and the Memphis Library.