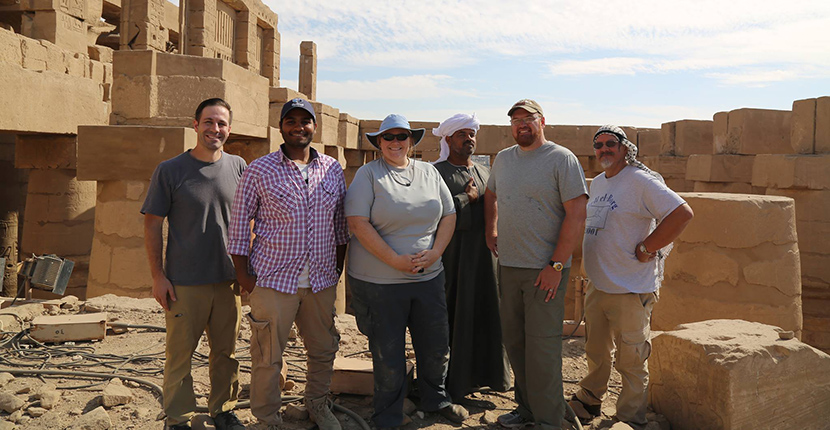 The Tandy Institute's contribution to the Karnak Great Hypostyle Hall Project during the 2016 field season focused on the recordation of the war scenes on the exterior of the western wall of the Cour de la Cachette, a task that will likely take several seasons. This does not include the Hittite Treaty of Ramesses II. 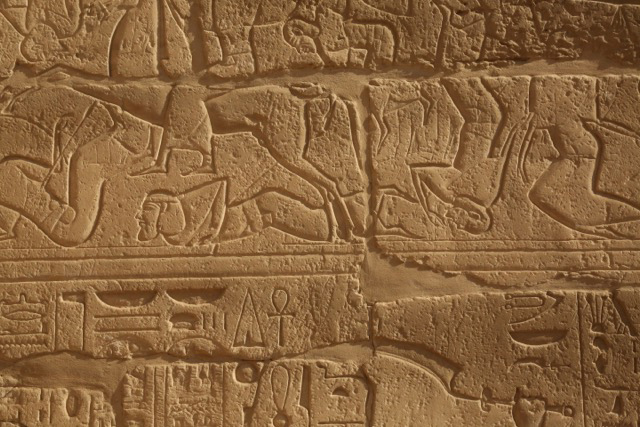 Battle scenes flank the Hittite Treaty on both the north and south ends of the wall. Our investigation confirmed that Merneptah was the original author of these war reliefs based on analysis of palimpsest cartouches, since elements of his name are clearly visible under the name of his successor, Seti II. Our team has not found any traces of the names of Ramesses II or Amenmesse in these cartouches, though the name of Ramesses II is attested in a bandeau text at the top of the wall. (photo to right: Merenptah's battle scenes with palimpsest traces of the Battle of Kadesh - click image for larger image)

On the north end of the wall the king attacks two fortified settlements, one from his chariot, one on foot. Numerous erased palimpsests from an earlier set of reliefs depicting the Battle of Kadesh commissioned by Ramesses II are visible on the northern end of the wall. While Egyptologists have noted some features of this palimpsest, especially the Orontes River at the bottom of the scene, we noticed several other palimpsest traces—soldiers, horses, chariot cabs, etc. Ramesses II never finished these scenes; often only faint traces remain. 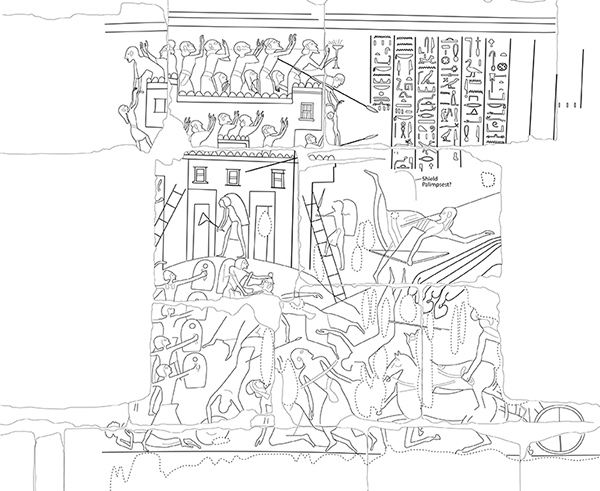 On the south end of the wall the king attacks Ashkelon, the only surviving toponym on the entire wall. Above this scene, the king attacks an unidentified group of Asiatics. Only the lower portion remains, making certain identification of this group impossible at present. Further south, the king defeats Shasu Bedouin and then binds prisoners. Rows of marching captives terminate in a large section of the wall from which no reliefs survive. It is likely there would have been a presentation scene here. Thus far, there are no observable palimpsests on the southern end of the wall. (Photo to the right: Preliminary facsimile drawing of the Ashkelon battle scene - click image for larger view.)

Of crucial importance, we were able to scientifically photograph the wall for the first time. We were then able to use photogrammetry software to create an orthomosaic of the wall based on over four hundred high-quality photos. From this model, we are making digital facsimiles (vector drawings) to allow for accurate collation of the scenes and texts in both this and future seasons. The orthomosaic will also provide detailed measurements.

Our future goals are to continue to collate the scenes and texts based on the digital facsimiles mentioned above, delineate all traces of the palimpsests of the battle of Kadesh, continue to examine the wall for traces of earlier material, analyze the orthography of the surviving hieroglyphs, and analyze various graffito, leading ultimately to a definitive, scientific publication in the coming years.