While the importance of recording Egypt's rich monumental legacy was realized from the very start of the West's rediscovery of Egypt, the sheer size of the task has proved daunting. The earliest efforts to document Egypt's monumental legacy in the first half of the 19th Century by François Champollion, Hipollito Rosellini and Karl Richard Lepsius between the 1820s and 1840s were highly selective 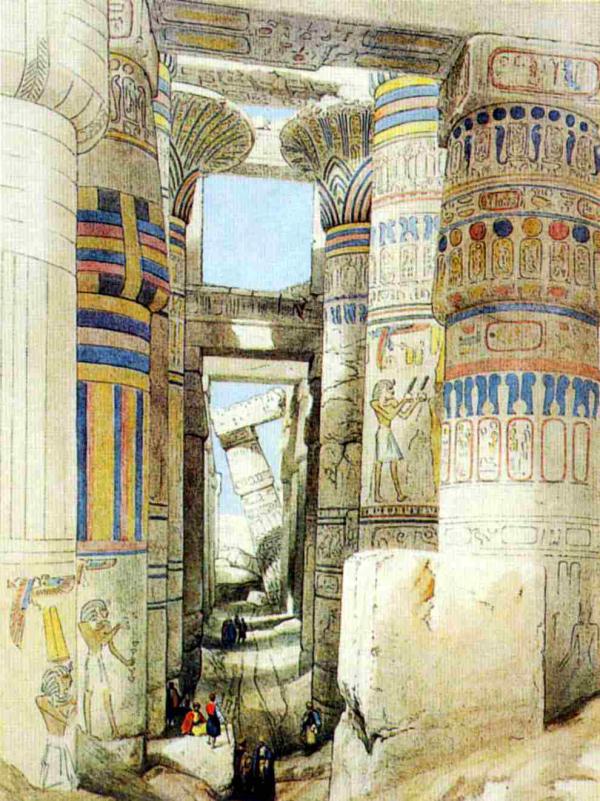 To date, only a small percentage of the Hypostyle Hall's vast trove of inscriptions has been scientifically recorded, including the war scenes of Seti I recorded by the Epigraphic Survey and the architrave inscriptions by Vincent Rondot.

Modern study and restoration of the Hypostyle Hall was set in motion at the very end of the Nineteenth Century when a catastrophe struck the building. On October 3, 1899, eleven of the columns in the northern wing suddenly collapsed in a chain reaction producing with a loud crash that could be heard at Luxor temple, a few miles south of the Karnak.

Worse, the talatat blocks were actively disintegrating from exposure to salt laden groundwater. The disaster of October 1899 promised to be just the first to strike the Hypostyle Hall unless something was done to shore up its precarious foundations

At the dawn of the 20th Century, a tireless French Egyptologist named Georges Legrain undertook a massive restoration program to repair, and in part to rebuild, the Hall. The northern half of the building was largely dismantled and rebuilt on new foundations. The southern wing was shored up by replacing the rotting foundations, one column at a time. Amazingly, new foundations of modern brick were inserted underneath most of the columns while they remained standing!