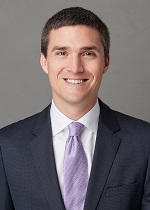 Professor Kiel has been a member of the faculty since 2008. He teaches Property, Constitutional Law, and Education & Civil Rights, and was awarded the University's Distinguished Teaching Award in 2017. Professor Kiel's scholarly work centers on inequality in the education system, particularly along lines of race. His research examines efforts to reduce educational disparities, including both the historical era of desegregation and more modern efforts to reform the structure of public education.

In 2011, Prof. Kiel built upon his work on school desegregation in Memphis through an oral history project that culminated in The Memphis 13, a documentary film he wrote and directed sharing the stories of the first students to desegregate public schools in Memphis. The film premiered at the National Civil Rights Museum on the 50th anniversary of that historic event and has been featured at film festivals, universities, and museums across the country.

In addition to his scholarly writing listed below, Prof. Kiel has written op-eds for the Washington Post, USA Today, and the Memphis Commercial Appeal and has given numerous presentations on issues of race and education, both locally and nationally. During the merger of school districts in Shelby County, Prof. Kiel was appointed to the Transition Planning Commission charged with crafting a plan for that merger, and served as co-chairperson of the group's Education Committee. For his work on schooling in Memphis, he has been cited in The New York Times, The Atlantic, and Education Week and was awarded the 2013 Dr. Martin Luther King, Jr., Human Rights Award by the University of Memphis.

In 2015, Prof. Kiel was awarded a Fulbright Fellowship to undertake comparative research on educational disparities in South Africa and was hosted during his months there at the University of the Free State. Prior to entering teaching, Prof. Kiel worked in private practice doing civil litigation at firms in Boston and Memphis. While in practice, he also represented criminal defendants in post-conviction matters at both the Sixth Circuit Court of Appeals and the Tennessee Court of Criminal Appeals. Prof. Kiel serves on the boards of Facing History and Ourselves and Just City, and was a founding steering committee member of Common Ground Memphis. On campus, he serves as a reviewer for the annual book award presented by the Benjamin Hooks Institute of Social Change.