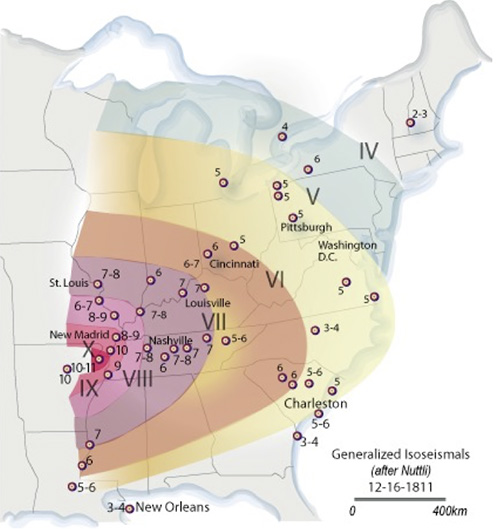 On the frontier of the  young United States in December 1811 began a sequence of events that would startle a young nation and puzzle scientists up to the present. In the early morning hours of December 16, 1811 the first of what would be called the New Madrid earthquakes shook the nation. These earthquakes would be experienced all across the young nation and bring awareness to natural phenomena that had been rarely experienced by Americans up to that time. The earthquakes would influence how people looked at nature and for people on the frontier provide a source of terror and amazement that would become legend over time.

The New Madrid earthquakes occurred in an area that was the frontier of the expanding United States. There were new states being created west of the Appalachian Mountains and the Louisiana Purchase had been acquired in 1803. Although vast in area the new territory was sparsely populated with a mix of inhabitants from countries such as France and Spain who had owned the Purchase and newly arriving Americans spreading west at a furious pace. Also Indian tribes were scattered across the vast stretches of land where no settlers had yet reached.  All of these people would experience the earthquakes in their own way and record the events as best as they could. In occupation they ranged from boatmen to doctors, farmers to politicians.  What united them all was experiencing phenomena vast in scope and powerful in its manifestations.

The earthquakes themselves were not one event but a series of quakes that would be felt over vast distances from December 1811 until February 1812. Even afterward the New Madrid area would be shaken by periodic quakes for years to come. Our New Madrid Compendium has many eyewitness accounts gleaned from journal entries, diaries, letters to the editors of major newspapers, etc.