Lately, my interest is in (1) the site response and wave amplification caused by unconsolidated sediments and very low-velocity near-surface soils using data recorded at the vertical arrays CUSSO, SFTN and MPHB; and (2) exploring near-surface soil structure in the Mississippi embayment by taking advantage of analytical techniques.

The direct use of my research (below) can be implemented in earthquake response for engineered environment and civil systems. It can contribute to earthquake safety through improvements in regional probabilistic earthquake hazard assessment thus reducing casualties and economic losses in urban area for the Central and Eastern US.

This research is built upon a better-constrained P- and S- velocity structure in the unconsolidated sediments beneath the loose soil zone that resulted from on-going research projects and previous studies. 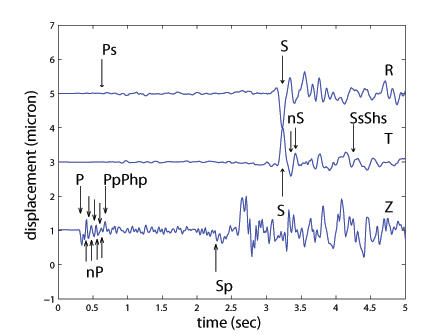 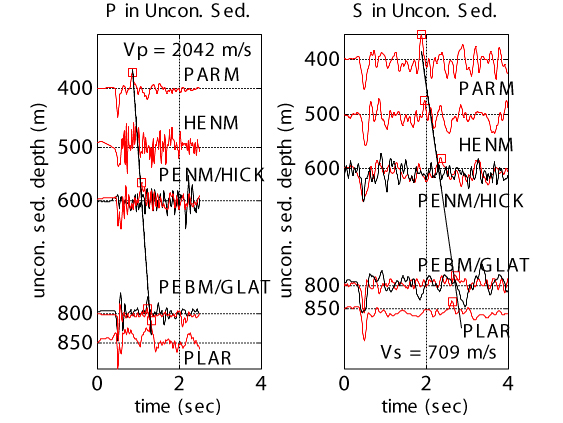 The data used can be

This study will yield better estimates of site response using instrumental recordings of local earthquakes in the central and eastern United States.

Preliminary results reveal the shear wave and strong converted S-to-P waves are amplified and near-surface soft soils produce significant high-frequency resonances with phase spectral amplitude ratios reaching up to ~12 times higher than waves observed on deeper recordings. These methods will enable us to empirically examine site response behavior of low-strain seismic waves in sedimentary basin deposits independent of geotechnical field experiments. The use of high-frequency (0.2-25 Hz) earthquake body waveforms can yield velocity structure models which can be employed to estimate site amplification for future strong ground motions due to large earthquakes in and surrounding the New Madrid seismic zone.