My principal research area is in use of seismic waveforms to infer source parameters and earth structure although I am interested in a wide range of geophysical methods including field studies. Currently, I have 2 projects with the Mid America Earthquake Center involving wave regional wave propagation within the central and eastern United States. These include investigations of regional waveforms from earthquakes and explosions to determine distance attenuation within the Mississippi Embayment and the effects of the unconsolidated and consolidated basement sediments on site amplification. Another recent project involves linear and non-linear wave propagation within embayment sediments using explosion sources and strong ground motion data funded through the USGS NEHRP program.

A theoretical outgrowth of several array experiments with the central U.S. is a new wave analysis technique call Wave Gradiometry (see Figure below). Dense geodetic seismic arrays can be constructed and used to determine the composition of wave fields including time and space dependent estimates of horizontal slowness, wave azimuth, changes in geometrical spreading, and source radiation pattern. These are described in a series of manuscripts in press at the Bulletin of the Seismological Society of America.

Another recent development is study of the interaction of acoustic shock waves with the ground to investigate near surface site structure. This was an outgrowth of an interesting wave propagation study involving a sonic boom from a bolide that broke up over the CERI network in 2004. Currently I am running a small infrasound and short-period seismic array near Moscow, Tennessee, to record another naturally occurring atmospheric shock wave - thunder - to determine characteristics of the thunder source and to investigate the ground response. 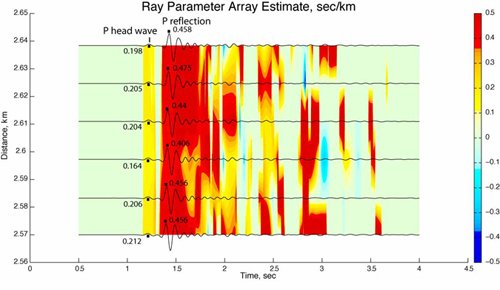 This is an example of the new processing technique, called Wave Gradiometry, applied to P wave data from a large explosion 2.55km from a dense, three component strong motion array. The colors show the apparent slowness of seismic waves sweeping across the array (in units of sec/km). There are 2 major P waves in these data - a head wave that refracts at the base of the Mississippi embayment sediments in the area and the post-critical P wave reflection from the same interface.