The Brightest of CAS: Students 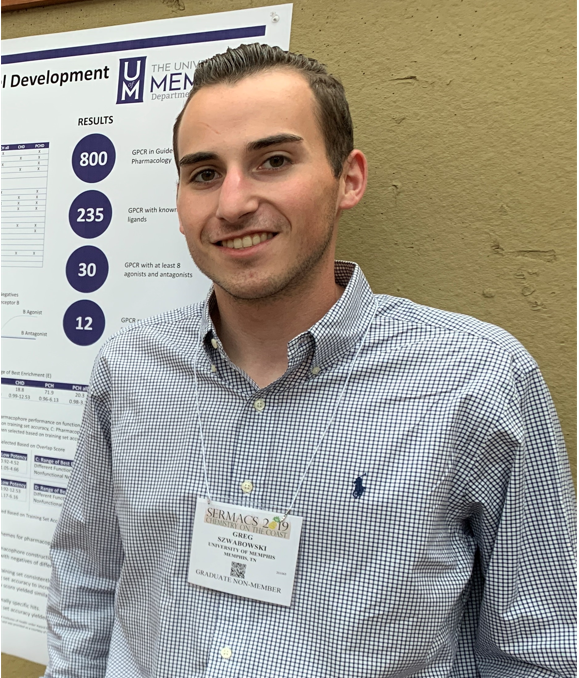 Feb - GREGORY L. SZWABOWSKI, graduate student, Department of Chemistry. His research involves the study of G protein-coupled receptors (GPCR), membrane proteins whose signaling plays a critical role in regulating physiological functions such as immune responses and neurotransmission. As a graduate student, he has worked on developing and automating new workflows to computationally predict protein structure and ligand-protein interaction patterns to aid in the discovery of new GPCR ligands. When GPCR signaling is dysregulated, diseases such as cancer, diabetes and heart failure can manifest. Thus, development of GPCR-based therapeutics is an area of interest of the pharmaceutical industry, with GPCR serving as the targets of ~33-50% of all FDA-approved drugs. Although these receptors possess immense therapeutic significance, there are two main challenges in GPCR ligand identification. The first challenge stems from a lack of experimentally determined structural information, as only ~13% of the over 800 known GPCR have experimentally determined structures. Since it is difficult to identify prospective ligands for a receptor without first analyzing its structure, researchers often rely on computational methods such as homology modeling (generating a predictive model of a protein lacking structure using a closely related template structure) or loop modeling (conformational sampling of the structurally variable extracellular loop 2 (ECL2) region of GPCR) to make structural predictions. In addition to a lack of resolved structures, many GPCR possess few or no known ligands, leaving the physiological roles and functions of many GPCR targets challenging to investigate. However, new developments in virtual screening (a computational technique used to search compound libraries and identify ligands likely to bind a target) are likely to aid the GPCR ligand discovery process.

The first project Szwabowski embarked on as a graduate student involved benchmarking a method of GPCR structure prediction that integrated the efforts of two prior graduate students. This project involved the generation of predictive models for 8 GPCR with known structure, which allowed him to test the accuracy of our modeling methods based on comparisons to experimentally determined reference structures. His research showed that when the group's homology modeling efforts were combined with ECL2 modeling while maintaining the template structure’s ligand during the modeling process, improvements in homology model quality and docked pose quality were found. As such, this method of GPCR structure prediction is now standard practice in numerous ongoing projects of several graduate students in Gregory’s research group.

Szwabowski’s recent research has focused on the development of pharmacophore models, which are three-dimensional arrangements of molecular features conferring biological activity. Pharmacophore models serve as a template with which to match prospective ligands during the virtual screening process and are therefore of great use to GPCR ligand identification efforts. He has developed two methods of pharmacophore model generation that are able to use crystal structures or predictive models of GPCR to identify sets of optimal ligand interactions for use in virtual screening efforts. Thus far, the GPCR ligand identification workflows he has developed have proved useful in identifying candidate ligands for two example GPCR and should prove useful to his group’s research efforts for years to come.

BRIGHTEST - IN CASE YOU MISSED IT (ICYMI)...