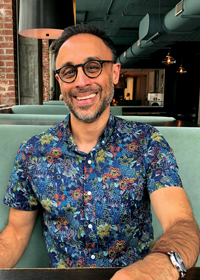 Dr. Darryl P. Domingo joined the Department of English at the University of Memphis in August 2011, after having earned his Ph.D. from the University of Toronto. His research interests are varied in subject and scope, but his primary area of expertise is in late seventeenth- and eighteenth-century conceptions of amusement and their implication in contemporary attitudes towards language, rhetoric, and wit. Taking seriously the complex reciprocal relationship between literature and culture, his work analyzes the often subtle ways in which cultural phenomena both represent and are represented by the discursive devices of literary texts. Rather than seeking simply to identify and elucidate topical allusions or oblique references to the relative content of eighteenth-century culture, Dr. Domingo aims to reveal the degree to which the idiosyncratic format of eighteenth-century texts reproduces the modes of presentation peculiar to, say, the printing house, the shop-window display, or the "Reigning Diversions of the Town."