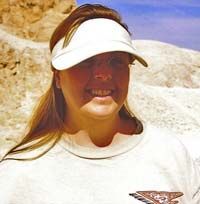 Phone
901.678.3383
Email
sonstine@memphis.edu
Fax
901.678.2720
Office
101 Mitchell
Office Hours
Tuesday and Thursday 1-2 or by appointment [Please note that I do fieldwork in Egypt during January and February and will not have campus office hours during this time.]

I am the faculty advisor for the Egyptology Graduate Student Association (EGSA) and RSO group for our Egyptology graduate students. I am also a founding Board Member of the Tennessee chapter of the American Research Center in Egypt; this group promotes education about Egypt through lectures and social events.

I am the director of the University of Memphis Mission to Theban Tomb 16 (Panehsy). We are studying a 19th dynasty tomb and the secondary burials in it through epigraphy, archaeology, and forensic studies of the human remains. We have been working in TT16 since 2008 and have unearthed hundreds of bones and mummy fragments. http://blogs.memphis.edu/suzanneonstine/