The Great Hypostyle Hall Karnak is a forest of 134 giant sandstone columns in the form of papyrus stalks. Twelve great columns in its central nave surpass 20 meters (70 ft.) in height and are capped by huge open papyrus blossom capitals. The main east-west axis of the Hypostyle Hall is dominated by a double row of 12 giant columns. 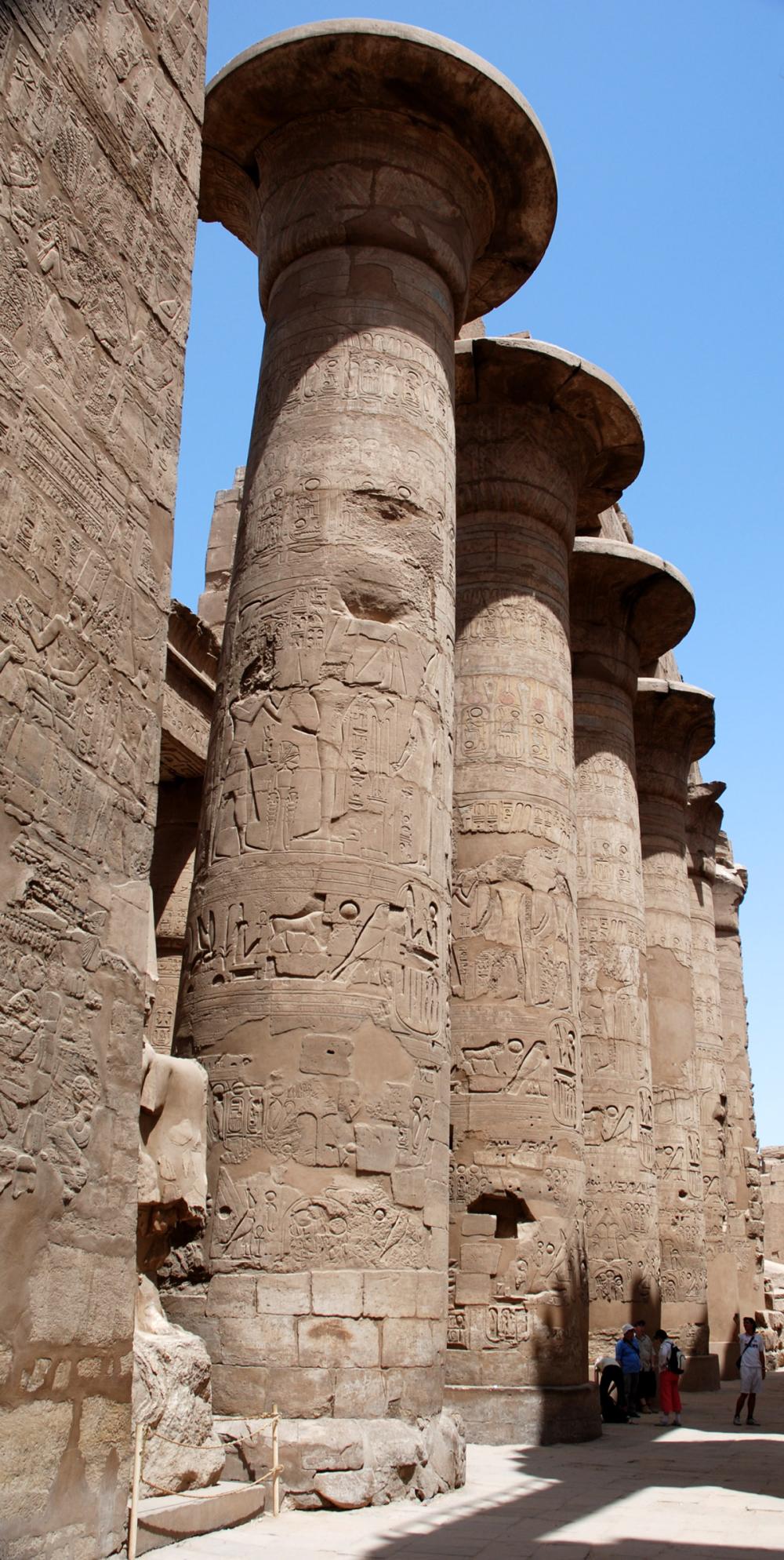 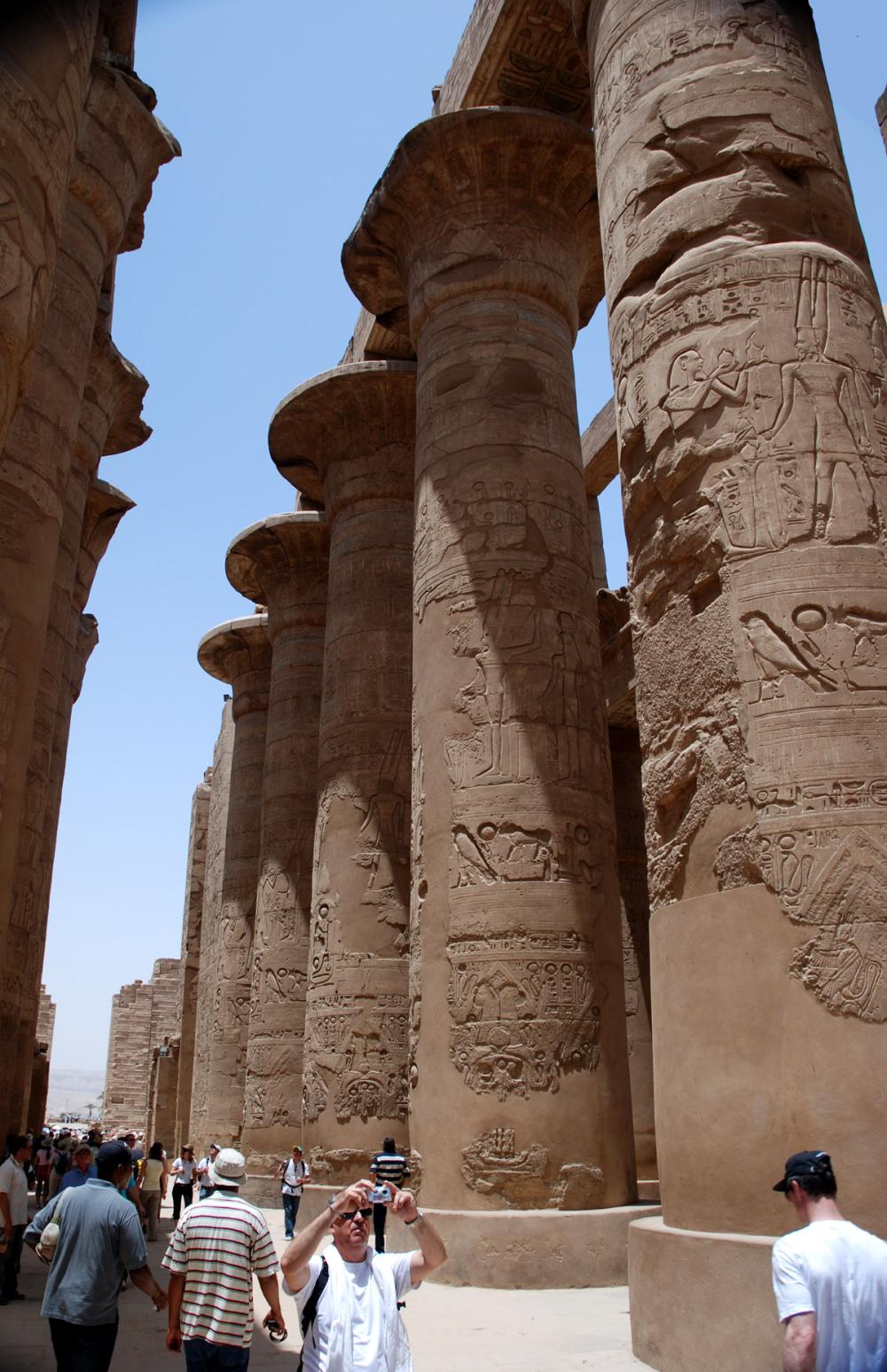 View of the twelve great columns at either side of the main axis of the Great Hypostyle Hall. Each one is 20 meters high.

These great columns are several meters taller than the 122 shorter closed-bud papyrus columns grouped on either side of the central aisle. The structural purpose of the twelve great columns was to support the higher roof of the clerestory in the central nave. 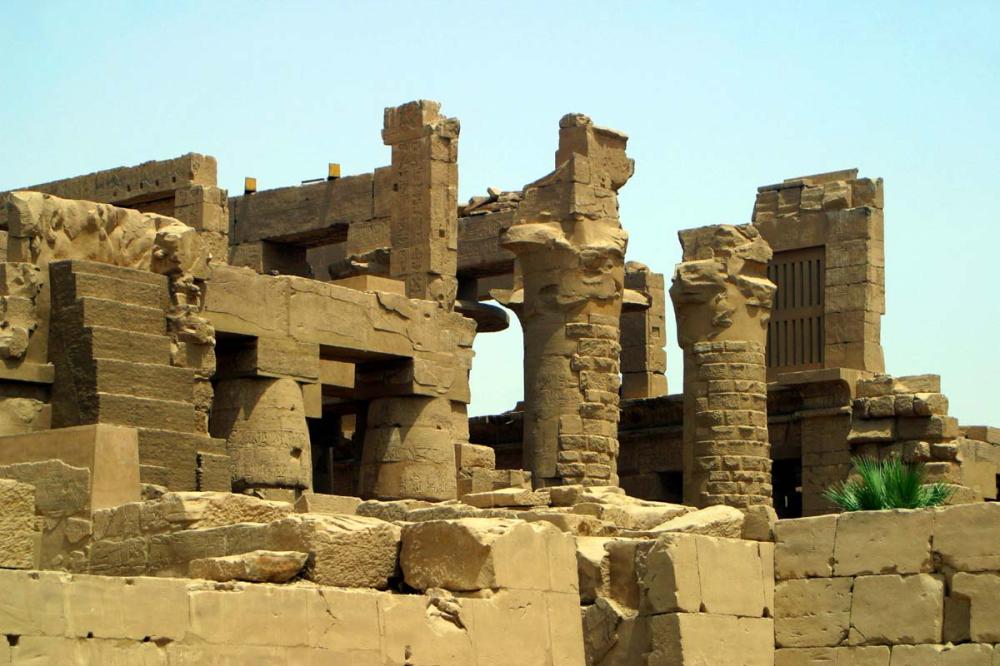 View of the great columns from the east of the Hypostyle Hall, showing the architraves above them and the adjacent clerestory window grilles. 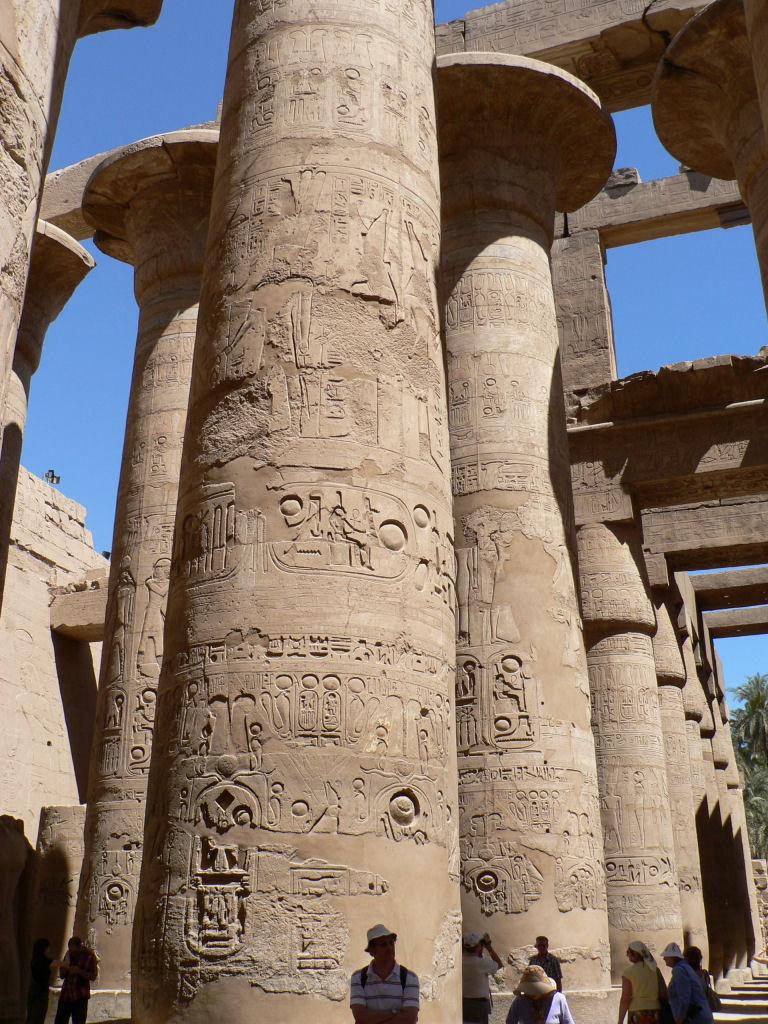 View of the great columns with their architraves and the clerestory windows.

All the columns in the hall represent papyrus stalks, and the 12 great ones have open capitals imitating the feathery blossoms of flowering papyrus.The diameters of the giant bell-shaped capitals are 5.4 meters (18 ft), wide enough to support 100 men. Natural papyrus stalks are not cylindrical but have three sides with ridges along each edge. The columns are round, but a slight ridge runs up each column like a vertical seam in imitation of the plant. 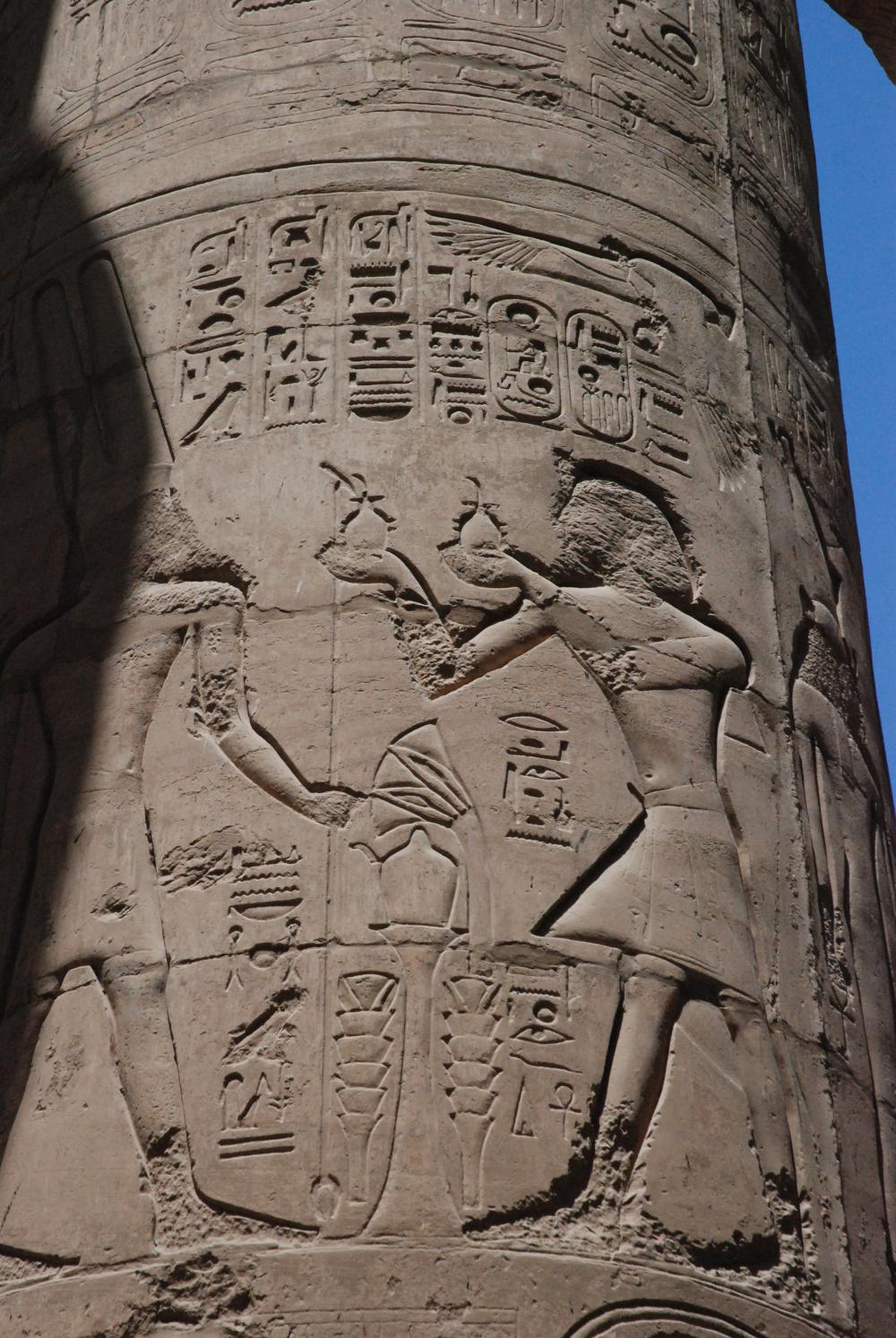 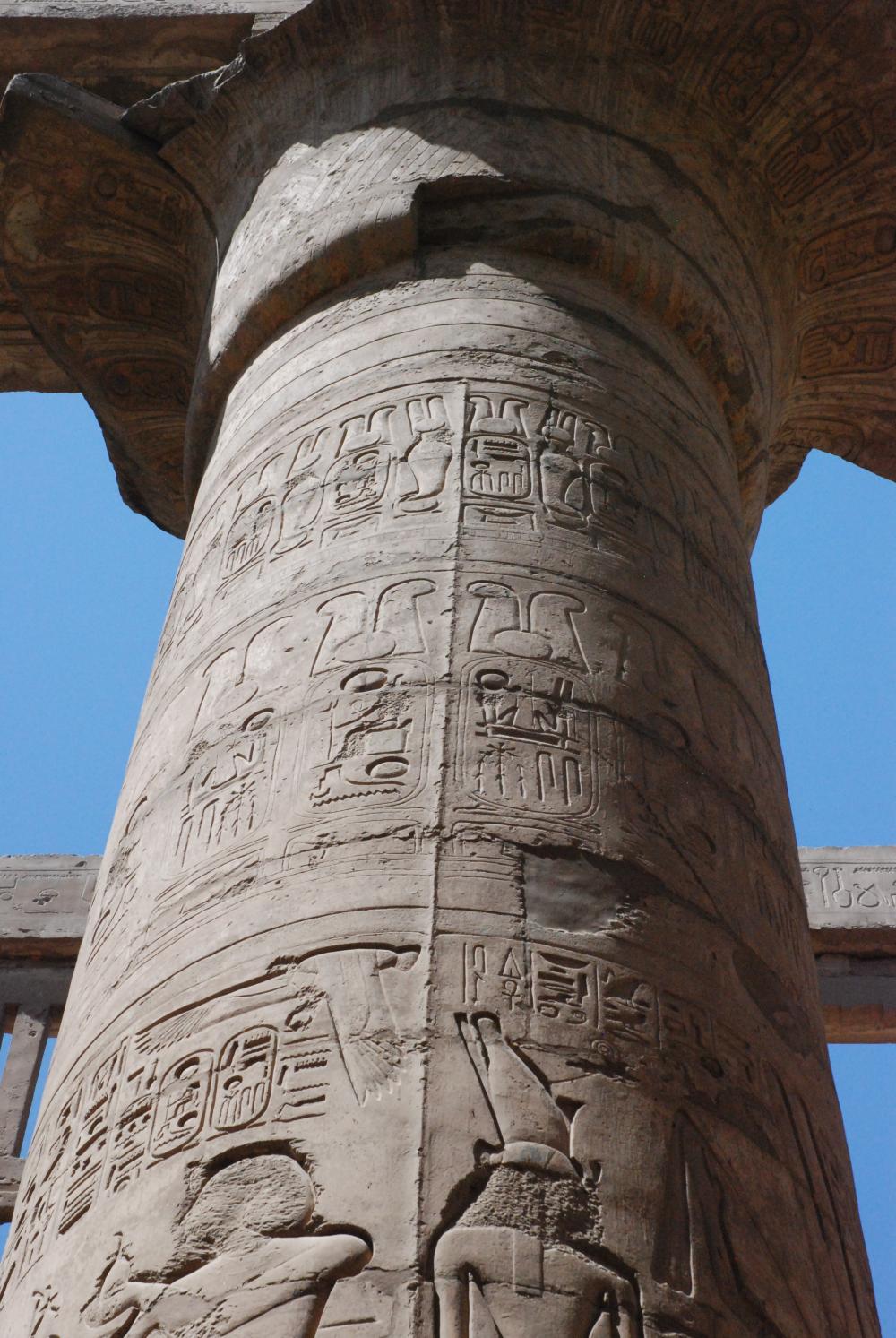 Detailed view of column no. 9 with the ridges naturally occurring on papyrus stalks modeled in raised relief.

Every inch of these columns has been inscribed by Ramesses II. Royal cartouches and Ramesses' other royal titles have been inserted nearly everywhere possible from the base of the shafts to tiny ones on the outer rims of the papyrus capitals. Two huge vertical cartouches below the scenes on each column face the processional axis, marking Ramesses II's claim to be the owner of the Hypostyle Hall. 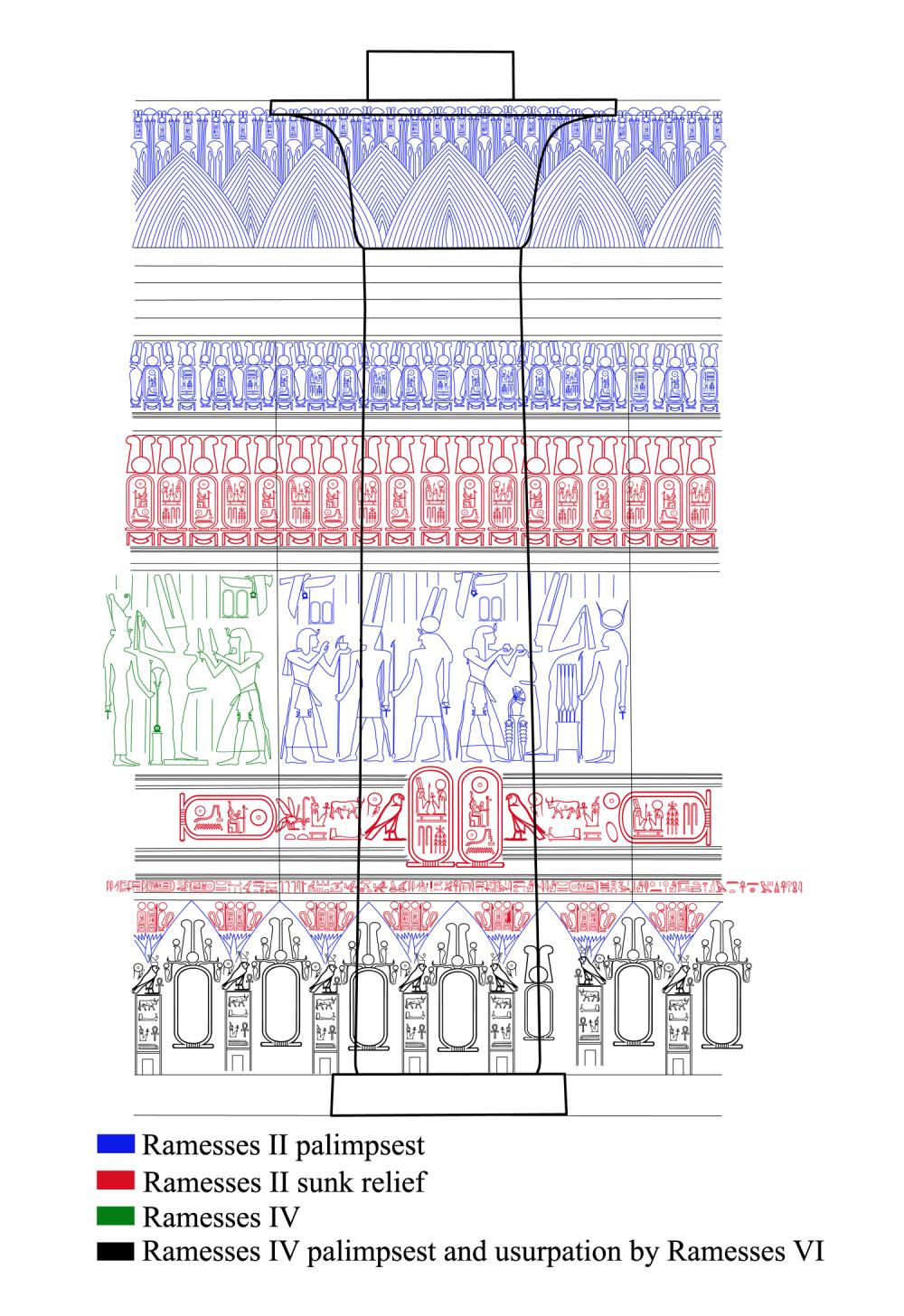 Schematic "unrolled" drawing of the complex decoration found on column no. 2. 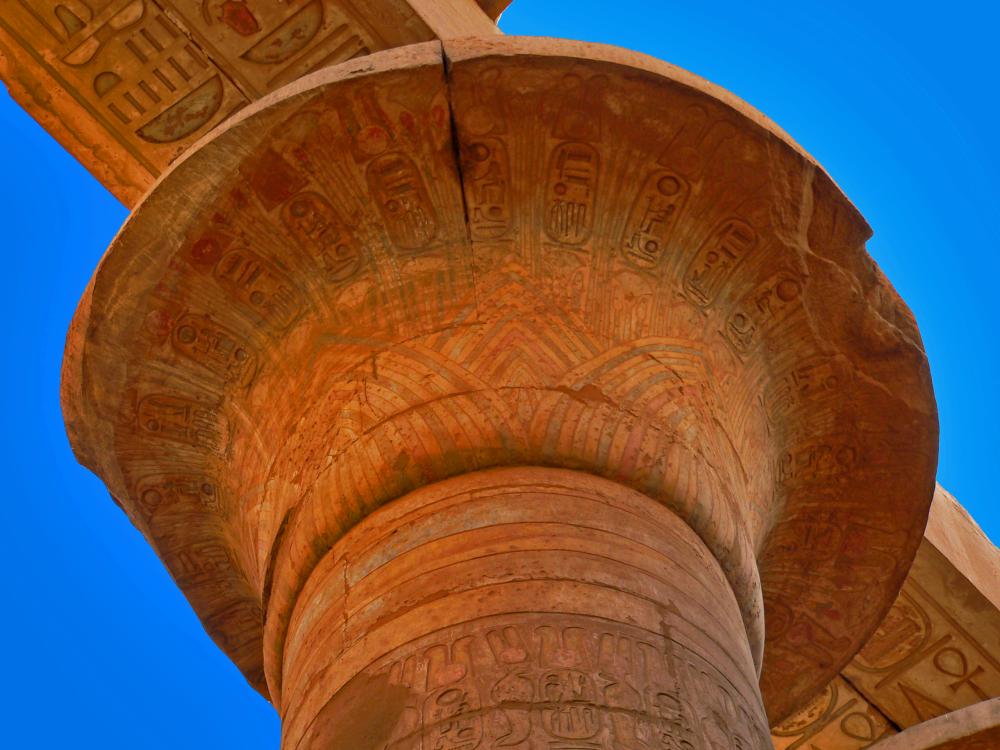 Ramesses II even placed his cartouches on the papyrus blossom capitals of the great columns 20 meters above the viewer at ground level. 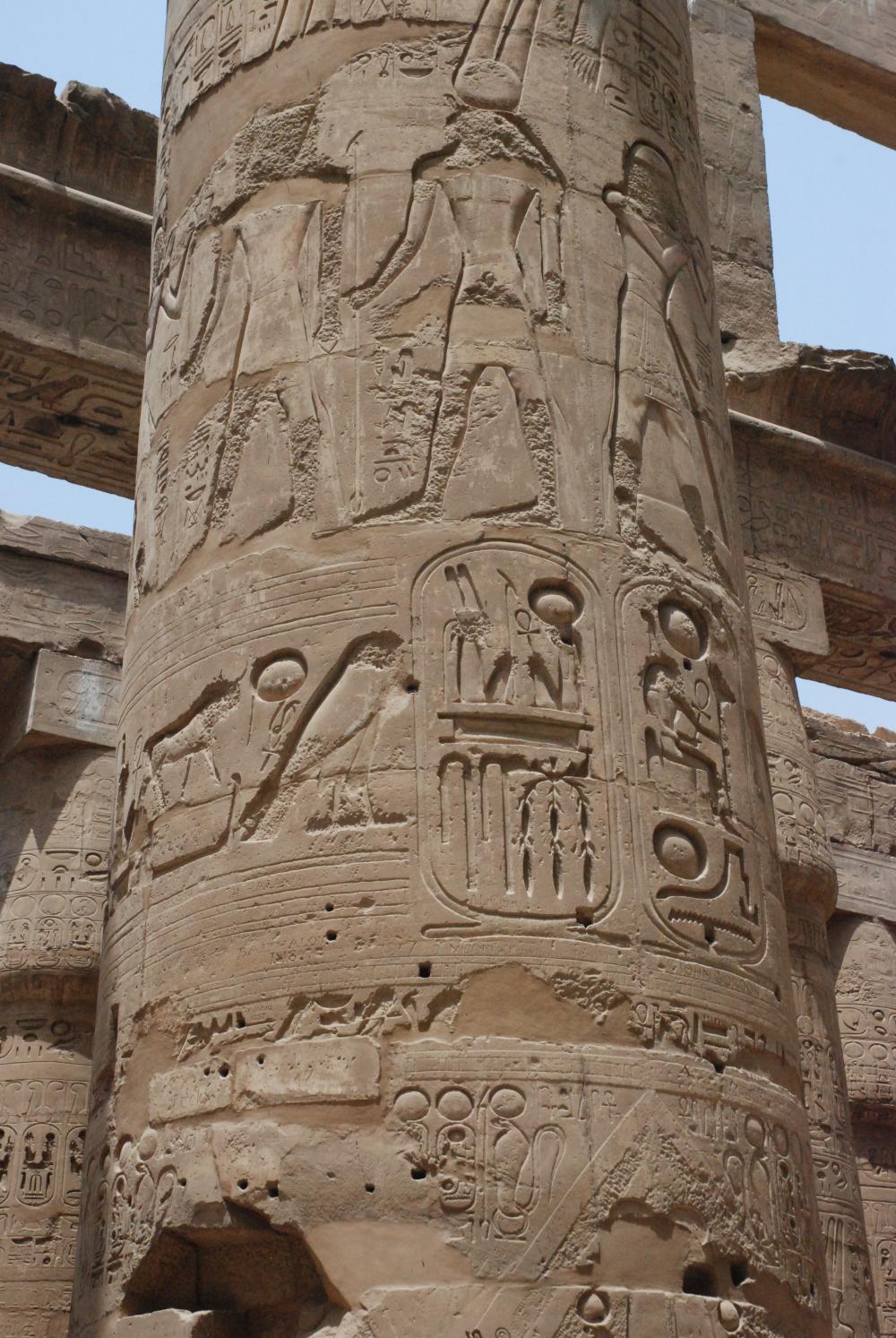 Detail of two of the scenes found on column no. 2, one of them facing west and the other facing east. Ramesses later added the large cartouches and just below the scene.

Ramesses II's interventions on the twelve great columns of the central nave are more extensive than for the 122 smaller ones. At the start of his reign, the twelve also had a simpler decorative scheme. The two main phases of his reliefs on these columns can be distinguished by the presence of absence of palimpsests of raised relief that he later converted to sunk. Reliefs lacking these palimpsests will have been carved in sunk relief later than those originally carved in raised relief. Initially, decoration on the great columns was limited to the triangular leaf pattern at the base of the shafts, two scenes midway up the shafts, a frieze of cartouches and cobras near the top and a vegetation motif with small cartouches on the wide papyrus blossom capitals. Large areas of the shafts remained undecorated. Here again, contemporary examples from the Ramesseum and the Colonnade Hall of Luxor offer useful parallels. On the open papyrus blossom columns in the first hypostyle hall of the Ramesseum, there is little additional decoration than this, aside from a cartouche and cobra motif between the triangular leaves at the base of the shafts and some stereotyped decoration of Ramesses III below the scenes. In the Luxor Colonnade Hall, the original decoration naming either Amenhotep III or Tutankhamun— the latter having been usurped by Horemheb— is limited to the leaf pattern at the base, a single scene and the frieze of cartouches and cobras near the top of the shaft. Later, Ramesses II, Merenptah and Sety II would insert additional stereotyped decoration in most of the blank spaces between.[1 ]

In the Great Hypostyle Hall, Ramesses II inserted additional stereotyped decoration above and below the scenes. Immediately above the scenes came an additional frieze of large cartouches resting on gold-signs and surmounted by a solar disk with ostrich plumes but lacking a frieze of cobras. Just beneath the scene was a pair of tall vertical cartouches facing the main axis. Extending to either side of these were parallels horizontal bandeau texts giving the king's Horus and cartouche names and titles. He inserted nearly identical bandeaux on the fourteen columns of the Luxor Colonnade Hall in the same position. Below this at Karnak was a small horizontal bandeau text with a speech of Amun and a string of the king's names and titles. Finally, Ramesses inserted a cobra and cartouche motif in the blank spaces between the triangular peaks of the leaf pattern at the base of the shafts. All of his later inscriptions on the twelve great columns were carved solely in sunk relief with the long form of his prenomen and the Ra-ms-s form of his nomen indicating that they were carved after his first regnal year but before his 21st year.

Several decades later, Ramesses IV (ruled ca. 1153-1147 BCE) added his own cartouches over triangular leaf patterns at the base of the shafts. These are difficult to read because this king changed the spelling of his name and recut these inscriptions. 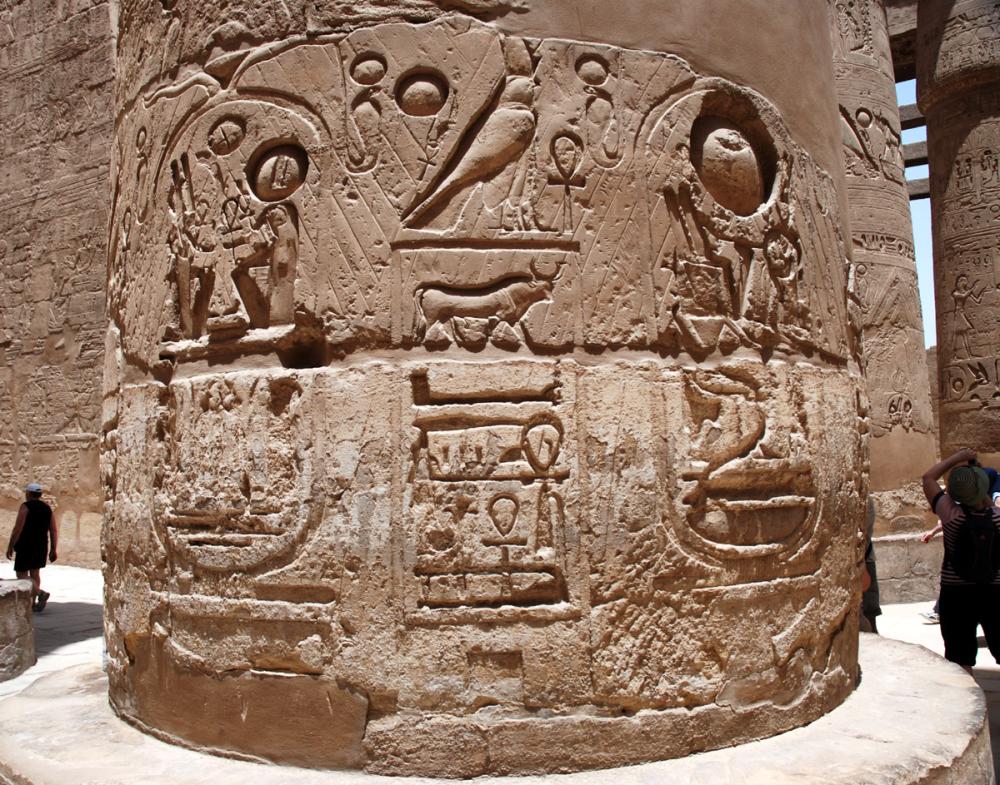 Base of one of the large columns with the cartouches and Horus names added by Ramesses IV over the triangular leaf-pattern at the base of the shaft. Ramesses VI later usurped these large cartouches.

Later still, Ramesses VI (ruled ca 1143-1136 BCE) took credit for these by placing his own name inside the cartouches. Plaster was used to cover the earlier versions each time. Most of this is gone, leaving a confusing jumble of hieroglyphs. In some places the plaster remains, testament to a Pharaonic "cover-up." 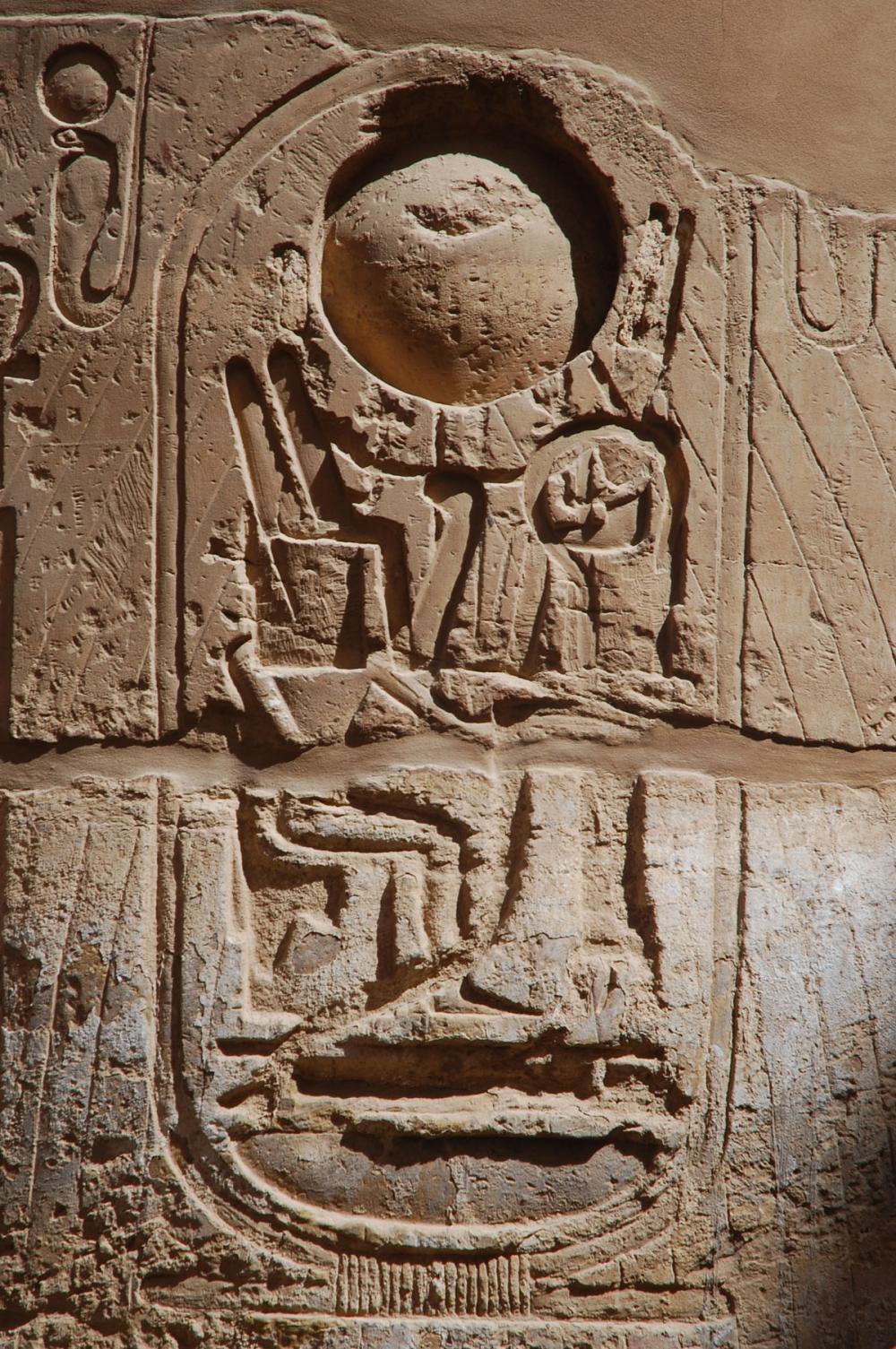 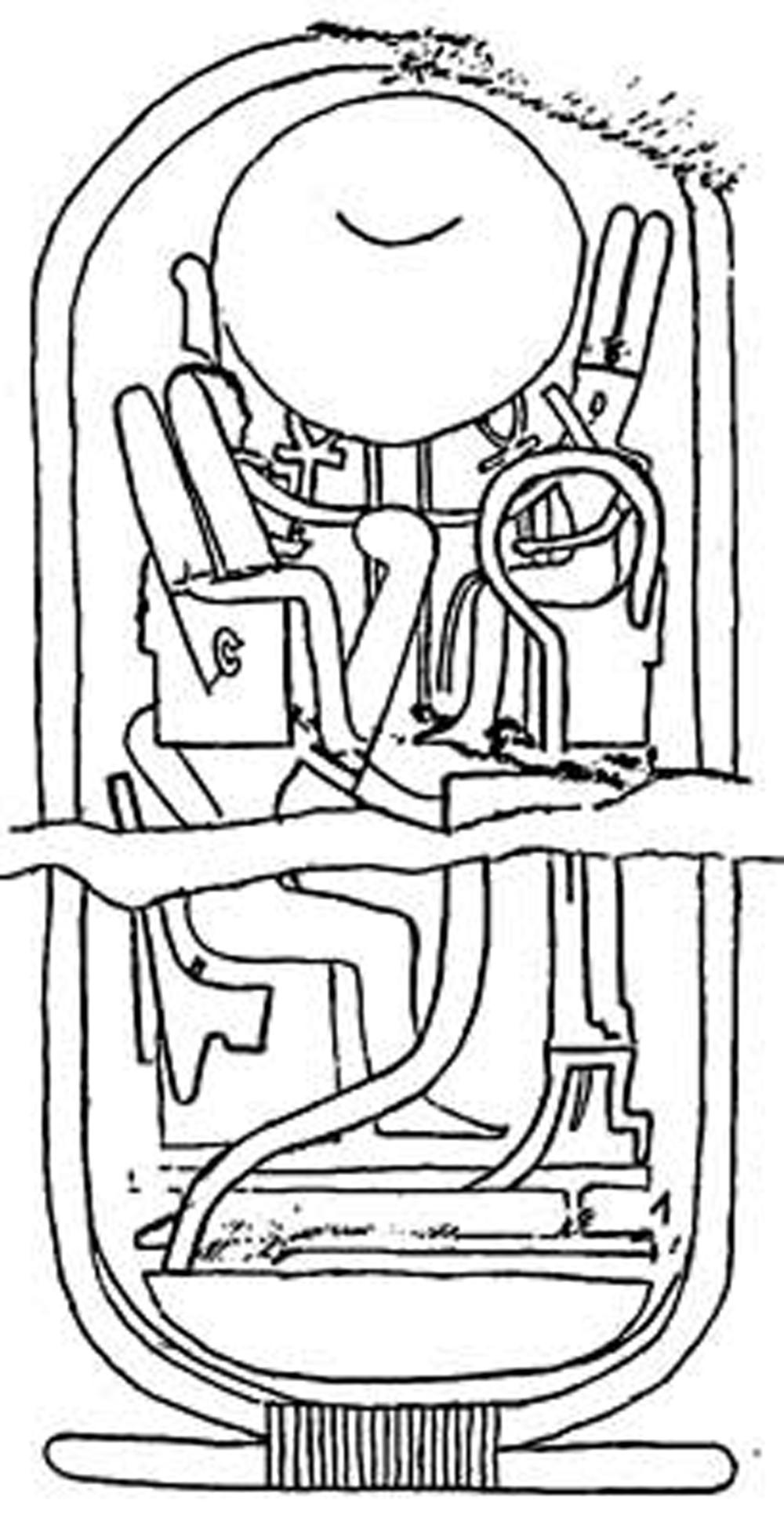 Three names in one cartouche. Ramesses IV first changed the "spelling" of his own name before Ramesses VI claimed the cartouches for his own. Note the plaster on either side of the large sun disk in the feathers of the god Amen (right) and Maat (left) . The rest of the plaster used to hide these changes has fallen out.