Danny Beagle attended Columbia University from 1960 to 1964 where he studied history and participated in
student activism, including the movement for nuclear disarmament. He was a long-time friend of Bob Gabriner, who was a student activist at Cornell. Gabriner introduced Beagle to Charlie Haynie, a student leader activist at Cornell who was organizing other Cornell student activists. When the Cornell students traveled to Fayette County in the summer of 1964 (also known as Freedom Summer) Beagle was among them. Beagle worked in Fayette County with Cornell students and local activists to encourage African Americans to vote. He returned to Fayette County in January 1965 to lay the ground work for more volunteers to build connections with the surrounding counties that included Hayood, Tipton and Hardeman. He also participated in sit-ins to protest segregation in public facilities, like restaurants, in Fayette County. While in Fayette County, Beagle and his brother was beaten and intimidated by the whites opposing the movement.

In 1960, Charlie Butts, then a student at Oberlin College in Ohio, arrived in Fayette County and worked closely with Minnie Jameson to create the Fayette County Civic and Welfare League's newsletter, "The League Link." This publication performed a valuable service for the black residents by: (1) distributing news and information not reported by the official county newspaper, "The Fayette Falcon," and (2), fostering a sense of community among the group of displaced families.

Charlie Butts discusses his involvement in the movement.

Doug Dowd was born December 7, 1919 in San Francisco. He earned his PhD in economics from the University of California at Berkley, where he taught history and economics. Later, he took a job at Cornell University as an economic historian. Dowd was the faculty sponsor of the student activist trips to Fayette County. While there, Dowd stayed with a family of two parents and eleven children in their one-bedroom home. His activism did not end with civil rights in Fayette County. He was friends with Phil Morrison, one of the men who had worked on and dropped the nuclear bombs in Hiroshima. Along with Morrison, Dowd engaged in many anti-war and anti-nuclear projects.

James Forman, a former teacher-turned-activist, visited Fayette County in November 1960, initially as part of a fact-finding trip for the Congress for Racial Equality (CORE), an organization established in 1942. Shocked by the conditions evicted sharecroppers suffered living in tents and blocked by the White Citizens Council from purchasing basic necessities, Forman sought to bring support to Fayette County. [Due to internal problems, Forman left the Chicago-based CORE chapter he had been working with and] [In 1961, Forman] started the National Freedom Council to raise awareness of the Fayette County situation, as well as to raise funds and collect food, clothing, and other basic needs for the families living in Tent City.

Bob Gabriner and Vicki Gabriner attended Cornell University and worked in Fayette County during the summers of 1964 and 1965. During the summer of 1964, they worked with Square Morman in District 10 to support the black community's effort to elect Rev. June Dowdy as tax assessor and L.T. Redfearn as sheriff. In 1965, they coordinated the West Tennessee Voters Project in Fayette County.

Tim Hall was born in Cleveland, Ohio and raised in a working-class neighborhood. His ancestors participated in the Underground Railroad in Ashtabula, Ohio. Tim came to Fayette County in June 1964 as part of the Cornell University civil rights project. Tim lived with the George Crout family in District 15 and worked with Richard Denenberg mobilizing people to register and vote in the 1964 election. After the election he stayed in Fayette County and collected affidavits from our poll watchers to prove that election fraud caused the black community's candidates to lose the election. He gave those affidavits to U.S. Atty. John Doar, Atty. Gen. Robert Kennedy's right-hand man, but nothing was done about the election theft. In May 1965, Tim returned to Fayette County, where he stayed with Buck Finney and participated in the sit-ins to integrate the restaurants in Somerville, where he and James Gray were attacked by racists led by Julian Pulliam. Tim worked closely with Fayette County Student Union members Jerry and Pepper Jenkins, Eva Maclin and Sadie Puckett (now Harris) and helped them publish their paper, "West Tennessee Freedom Train." In the summer of 1966, Tim returned to Fayette County with Sally Bautista, whom he later married, and worked with Sherman and Versie Perry to help elect members of the Fayette County Quarterly Commission. 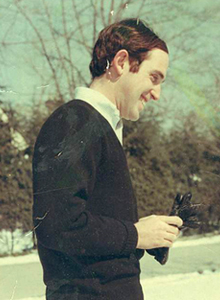 In 1965, Robert Hamburger first came to Fayette County as a civil rights worker from the University of Chicago. While researching and writing Our Portion of Hell: An Oral History of the Struggle for Civil Rights in Fayette County, Tennessee (1973), he spent many months in Fayette County.

Robert Hamburger Reflects on How He Came to Participate in the Civil Rights Movement.

In 2001, Robert Hamburger began working with Daphene McFerren and the Fayette County Civil Rights Museum, an organization created by them and others to preserve the history of the Fayette County Movement. Hamburger's work with the Museum led to, among other things, the production of the documentary "Fayette County: Freedom's Frontline."

Starting in 1971 as a student at Denison University, Dean Hansell made about 15 trips to Fayette County. He was the youngest person to join the Board of Fayette/Haywood Workcamps. In Fayette County, he taught classes in Tennessee law and street law in several freedom schools and with Lucinda Hargrave maintained four small freedom libraries in Fayette and Haywood Counties. He also taught literacy classes and worked on the construction of the Rossville Health Clinic building located in District 10.

Hansell and other Fayette/Haywood workcampers lived and worked closely with many Fayette County civil rights leaders, including Square Mormon, Maggie Mae Horton, Porter and Mattie Shields, John and Viola McFerren, and Tommie Reed. In addition to helping to organize freedom schools and freedom libraries, they worked on vote registration, construction projects, distributing multi-purpose food supplements, taught literacy classes, and undertook advocacy work. Under the leadership of Virgie Hortenstine, Fayette/Haywood Workcamps was started by Quakers from Ohio and drew students from Denison, Cornell, Wilmington College, Oberlin and other schools as well as members of various Quaker communities.

Dean Hansell, now a lawyer in Los Angeles, is a partner at Hogan Lovells. He was Police Commissioner of Los Angeles and serves on several civic boards.

Charlie Haynie received his undergraduate and graduate education at Cornell University in engineering physics and mathematics. The physics and math faculty at Cornell were critical of the nuclear deterrence policies of the United States during the Cold War and supported student activism. Haynie participated in the Freedom Rides in May 1961 and attended a civil rights conference in Atlanta where Carl and Ann Braden, longtime activists connected with Highlander, suggested that he and his wife, Roena Haynie, work with Movement activists in Fayette County.

Debbie Rib Henry was born July 18, 1939 and died June 16, 1994. Debbie Rib, a graduate of the University of Wisconsin, came to Fayette County in the mid-1960s and spent several months living in the Fayette County working with the black community. Debbie is remembered by members of Fayette County as an extremely warm, loving and caring person who inspired those around her to work for the good of all people. After leaving Fayette County, Debbie attended City University of New York, where she received her MA in public health. Debbie was the loving mother of one son, Seth Harry Henry.

Virgie Bernhardt Hortenstine assisted in the administration of Operation Freedom. Hortenstein led the Fayette-Haywood Workcamps, which provided educational and employment training to poor blacks. The Fayette Haywood Workcamp organization was chartered in February of 1968, but began working ,through Operation Freedom, in Fayette and Haywood Counties nearly a decade before being chartered. The organization is now considered inactive, but the exact date of the organization's end is unknown. Hortenstein, the leader of the organization, worked in Fayette and Haywood counties until her death in the mid-1980s.