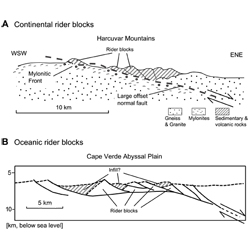 At Computational Tectonic Modeling (CTM) Lab, we aim to understand long-term evolution of geological structures in crust and lithosphere through numerical simulations.

In one of the ongoing projects, we explored the conditions for the rider block formation in terms of strain-weakening of a fault's frictional strength and suggested that where rider blocks are found, the faults cannot be as weak as often assumed and are likely to be weakened by losing cohesion rather than friction. Expanding on this semi-analytic study and using high-resolution numerical models for the longer evolution of a large-offset normal fault and rider blocks, we could suggest that the geometry of rider blocks can be used to infer the strength of the fault that generated the blocks.

We are now trying to go beyond the cross-sectional 2D model and explain the finite width of core complexes using high-resolution 3D numerical models.

Another research topic we are working on is to model the interplay between tectonic and surface processes through software coupling. In particular, we are trying to couple SNAC and CHILD. Using this pair of codes as an example, we are going to contribute to developing Framework Definition Language, which is a collaborative effort funded by NSF Earth Cube program and will help facilitate inter-framework coupling. The ultimate goal of such a sophisticated software coupling is to better understand how the surface processes like erosion and deposition influence long-term tectonic processes and vice versa. (See animation here.)

To facilitate these researches, we have developed a novel simulation code, DynEarthSol2D, in collaboration with a group of international researchers. DynEarthSol2D is a fast and robust geodynamic code incorporating some of the latest advances in computational solid mechanics such as nodal mixed discretization on an unstructured mesh and adaptive mesh refinement.

A three-dimensional version of DynEarthSol2D, not so surprisingly named as DynEarthSol3D, is under development. This code implements the same algorithm with that of its 2D predecessor but adopts multithreading parallelization in order to take advantage of the modern co-processors such as GPGPUs and Intel Xeon Phi. Through collaboration with Dr. Byunghyun Jang, a computer scientists at University of Mississippi, we are trying to adapt to the latest advances in co-processor architecture that are expected to eliminate the need for transferring data between CPU and co-processor memory. The limited bandwidth in that communication currently poses a bottleneck for the performance of DynEarthSol2D/3D on a heterogeneous hardware.