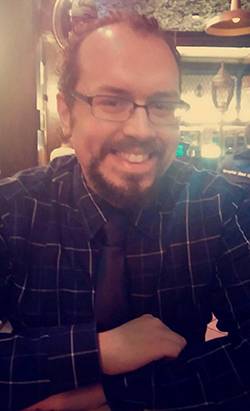 Kyle Christensen is a doctoral candidate in the Department of Communication. As a student of media, his work examines representations of gender and age in film and media through feminist, queer, and psychoanalytic lenses. He is particularly interested in the horror genre, and his current research is concerned with orality and depictions of monstrous mouths as they aid in challenging and distorting conventional categories of gender/age in horror narratives.

Graduate Teaching Assistantship, Department of Communication at the University of Memphis, August 2014-Present

Research Award (Graduate Student) from the Department of Communication at the University of Memphis, May 2015

Christensen, Kyle. "Slashing through the Bonds of Blood: Queer Family and Scream:
The TV Series." Horror Television in the Age of Consumption: Binging on Fear (forthcoming, Routledge).