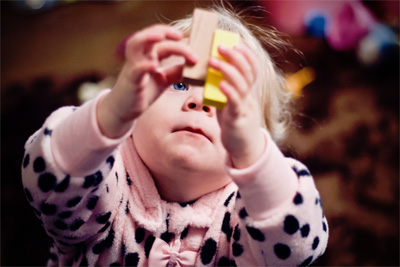 An outside observer of PlayBABY! might see small children singing in a circle, playing with dried rice and beans at a table, or exploring MSHC's outdoor recreation area. But JoClaire Merrill and the graduate students who work in the early intervention program see the many complex skills the children are developing beneath the surface.

"We increase communication skills through play-based learning and parent training," Merrill, lead clinician and director of PlayBABY!, said. "Each week we target two different play areas, like sensorimotor, functional, or relational play." The focus is embedding play skills into language in whatever way is most appropriate for the child—skills that will be built on in the future in more traditional classroom environments.

"We started out by assessing each child's developmental play skills," Merrill said. "We engage children at their present level and not trying to fit a curriculum to them." The children's parents stay throughout the sessions to observe and interact with their children, and ask questions. The graduate clinicians also develop a weekly newsletter that informs the parents about the play goals of each week's session and target core vocabulary words. Merrill also views the program as a tool to train grad students on how to coach the parents of children who have language difficulties, which is a crucial component of early intervention.

Parents at a session in late March expressed satisfaction with the program. "At first, [my child] didn't touch anything, so this is a huge improvement," a father of one of the children said as his son played with dried rice. Introducing the children to different textures can also alleviate feeding issues. "Before, he wasn't doing this," he said later as his son was fed with a spoon.

The grandmother of another child noted the social benefits of the program on her grandson. "I see growth," she said. "I like seeing him interact with other children."