For many people living with aphasia, recovery is a journey that lasts far beyond the one-year mark. That's why the Memphis Speech and Hearing Clinic is offering its first ever Aphasia Boot Camp this summer. The intensive language-based program will empower stroke survivors to maximize their communication potential and enhance life participation through individual therapy, group therapy, rotating therapy, and a weekly caregiver support group. The camp is specifically tailored to clients who have previously had some aphasia therapy. 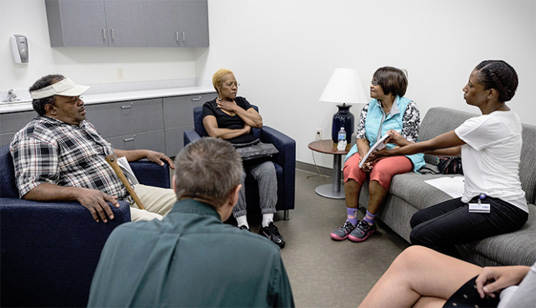 According to Clinic Director Marilyn Wark, the nearest comparable programs are in Florida and Austin, Texas. The boot camp will be the first of its kind in the Mid-South area. "Often in this region of the country, there is a lack of intensive treatment for individuals who've had stroke or head injury aphasia," she said. "Often people have to end services when there's still a lot of progress to be made."

The idea for the boot camp originated with two CSD alums, Kelly Owens and Tawni Ballinger. Before Owens became a speech-language pathologist, her husband experienced a stroke. Ballinger, a personal friend, guided Owens to an aphasia program in Florida. Now, Owens has teamed up with Ballinger to provide the people of the Mid-South with something similar to the program that gave her her husband back.

Wark believes Owens' personal connection to the work she's doing will be an asset to those who attend the program.

"A big part of this work is providing a community for people who've had the same kind of experiences, and including their families," she said.

At the time of publication, 13 people had applied for the 10 spots available in the program. Looking ahead, Wark would like to be able to accommodate more clients.

"I would like to see it more than once a year," she said. "I think it has the potential to be multidisciplinary as well."