Dr. Deborah Moncrieff has given much of her academic career to creating the diagnosis and treatment for a type of auditory processing disorder she has named "amblyaudia." Now she is developing an invention through which she may distribute treatment across the nation, into schools, and even into patient's own homes. 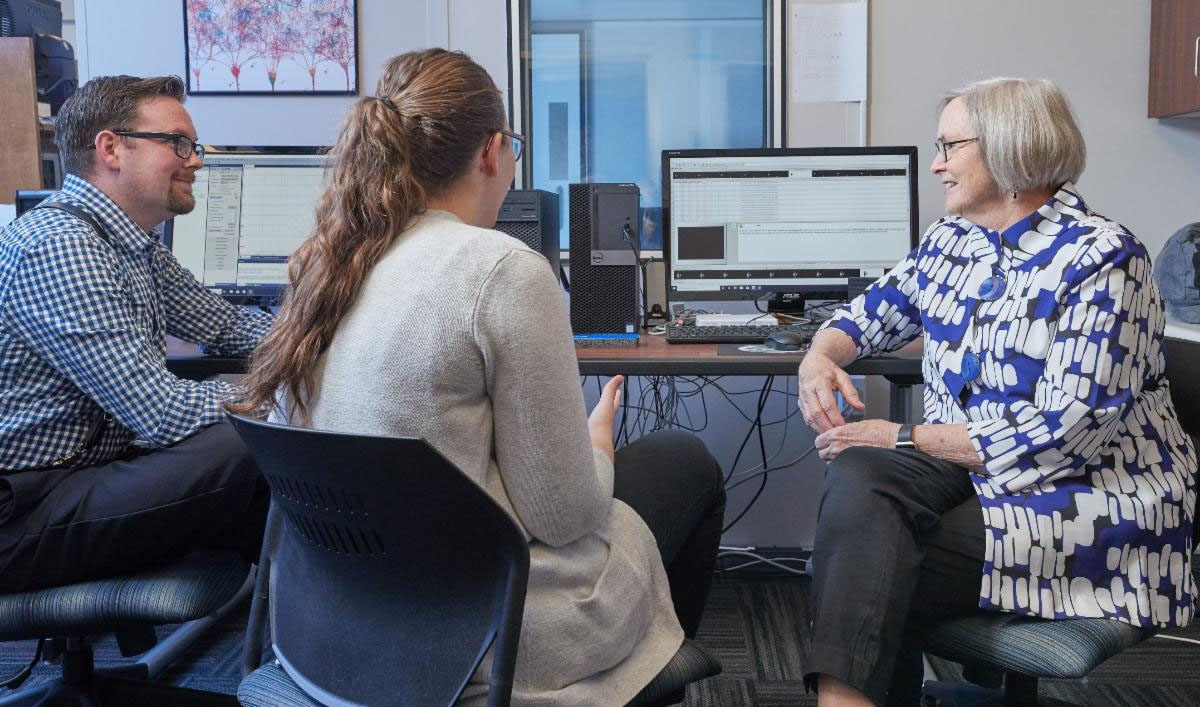 She named the disorder "amblyaudia," which comes from the Greek for "blunt hearing." It is analogous to the vision term "amblyopia," colloquially called "lazy eye."

Amblyaudia is diagnosed with dichotic listening tests, in which two words are presented simultaneously to a patient who must decipher both. Most people are slightly better at identifying stimuli presented to one ear versus the other but people with amblyaudia have a dramatic difference between their two ears' ability to process the stimuli.

Dr. Moncrieff is passionate about changing the common narrative about children with amblyaudia. They are often misdiagnosed with learning disabilities, ADHD, or even behavioral disorders when they act out in response to confusion about verbal instruction. Preliminary research by Moncrieff estimates that about 1-6% of elementary students have a severe case of amblyaudia and 15-20% have a moderate case. Parent and teacher reports suggest that even mild cases of amblyaudia could have a negative impact on learning.

Thankfully, the treatment is simple. One hour of treatment a week for four weeks has led to significant improvement in children's weaker ears (Moncrieff, 2017). This groundbreaking treatment, developed by Moncrieff herself, is called "ARIA" (Auditory Rehabilitation for Interaural Asymmetry). The one downside is that it requires a trained audiologist to continuously score and calibrate dichotic listening stimuli in a sound booth.

"I've been like a mother bear. I don't let just anybody do this therapy unless they've had training because it depends on systematic changes to the stimuli that the clinician must know how to make," she said.

The result is that ARIA isn't very accessible for the high number of children all over the U.S. who would benefit from therapy.

That is why Moncrieff set out to make an invention that could bring the treatment across the nation to anyone who needs it. Thanks to the FedEx Institute of Technology, this dream may become a reality. Moncrieff has received a grant for her proposal to create a set of headphones with a software program that will deliver the treatment for amblyaudia without an audiologist ever in the room. A voice activation software will automatically score the students' responses and adjust the stimuli accordingly. Instead of a trained professional, anyone will be able to "just put the earphones on the child and start the software and be there to supervise and make sure the child is cooperating," she said.

"When the device is finished, the person can put the earphones on, and acoustically it will be exactly the same as if they are sitting in a sound field," she said.

They could even be delivered to students' own homes. She had previously imagined they would likely never do so, since the treatment is so short. But today, in a world of pressing teletherapy demands, she has already demonstrated that children can be assessed for amblyaudia through the internet and the new therapy device could potentially be made available in student's homes through telepractice as well.

The device has huge potential for dissemination. Moncrieff recalls her first proposal.

"When I first went to talk to the people at the FedEx Institute, I thought about doing this for everybody in the country. And then I was asked, 'is there any reason we couldn't do this in every other language?'" she said.

Things are moving forward on development of the new device. Ed Brainerd, Manager of Computer Systems Support, for the Center for Research Initiatives and Strategies for the Communicatively Impaired (CRISCI), is collaborating to develop the software, and two AuD students are receiving financial aid to create new sound files for delivery under earphones. A provisional patent application was recently filed and once the device is ready to trial, it will need to be tested for effectiveness in English. Once it is established that it works as well as therapy in the clinic, efforts toward translation to other languages will be a real possibility.

Due to school closures this spring, some of her plans may be delayed, but she will soon begin remotely testing students from the UofM's Campus School through a revised IRB protocol.

Moncrieff's overarching intent for this project is accessibility for anyone. "My desire is to make this available at a reasonable enough cost so that schools that are poorer and don't have a lot of special resources can get them," she said. Her invention may make this possible.