Despite their infinite variety of iconographic details and combinations of hieroglyphic texts, all these ritual scenes possess a common structure allowing the viewer to decode them. Pharaoh appears on one side of the scene, confronting one or more deities who face him. Normally, the artists carefully designed the image so that the king appears to have arrived from outside the temple and faces towards its interior, while the gods resting within it face towards the outside world. The principal deity always faces the king directly, while secondary divinities stand behind him. Attendant deities are often female or are males that are somehow subordinate to the premiere one. Less often, another deity stands behind the king and always faces in the same direction that he does.

In the middle of most ritual scenes, an altar bearing offerings stands between the king and the main god. These vary from heavily laden tables piled high with an assortment of bread, meat, fruits, flowers, and incense pots to a single hourglass shaped table-stand bearing a libation vase and small bouquet of flowers. While such offering tables may be the central focus of the king’s cultic act, when he dedicates them, in other cases they are incidental to his rite and serve mainly as “space fillers.” Offering stands can even be entirely absent due either to lack of space or when they are replaced with other bulky objects crucial to the ritual as when Pharaoh drives the four calves or consecrates Meret-chests.

Above the king’s head, except where space is lacking, there usually hovers a raptor or solar symbol as manifestation of a protective deity. Vultures commonly represent the goddesses Nekhbet of Upper Egypt or Wadjet of Lower Egypt. Nekhbet’s primary form was as a vulture while Wadjet was a serpent goddess, sometimes with a cobra’s head, but who also appeared as a vulture. Falcons always represent the Behdetite, a form of the kingly god Horus. Solar disks, often with two uraeus cobras and sometimes with hieroglyphic signs for life and dominion suspended from them, are further incarnations of the Behdetite. 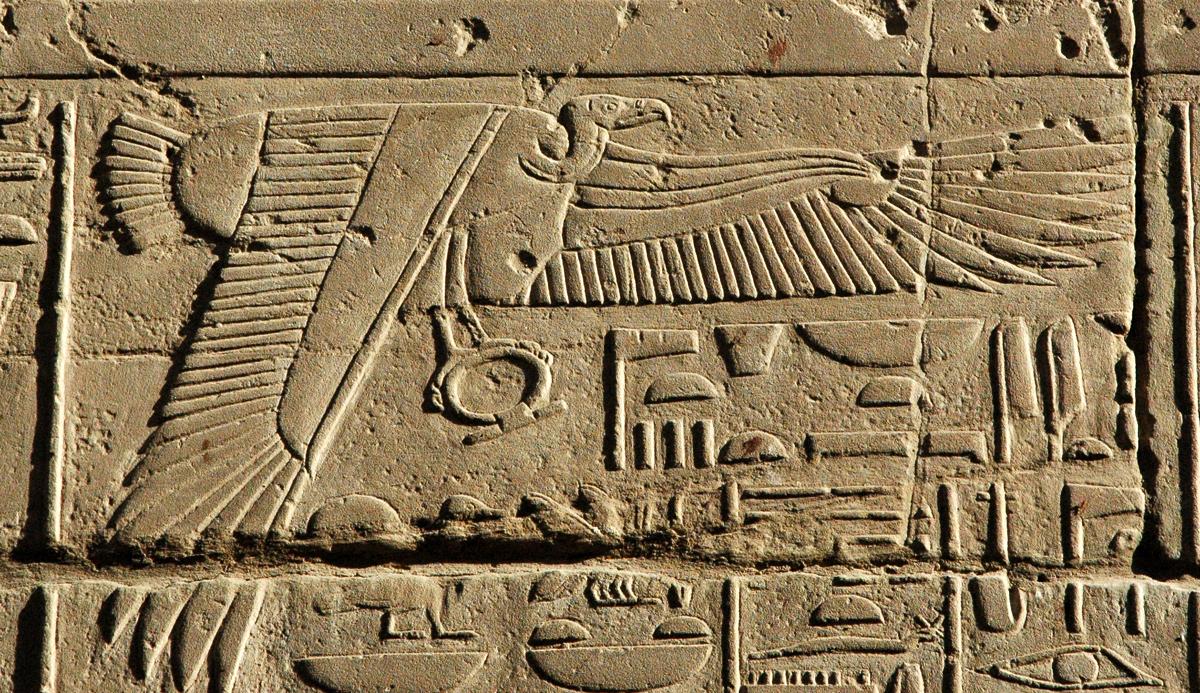 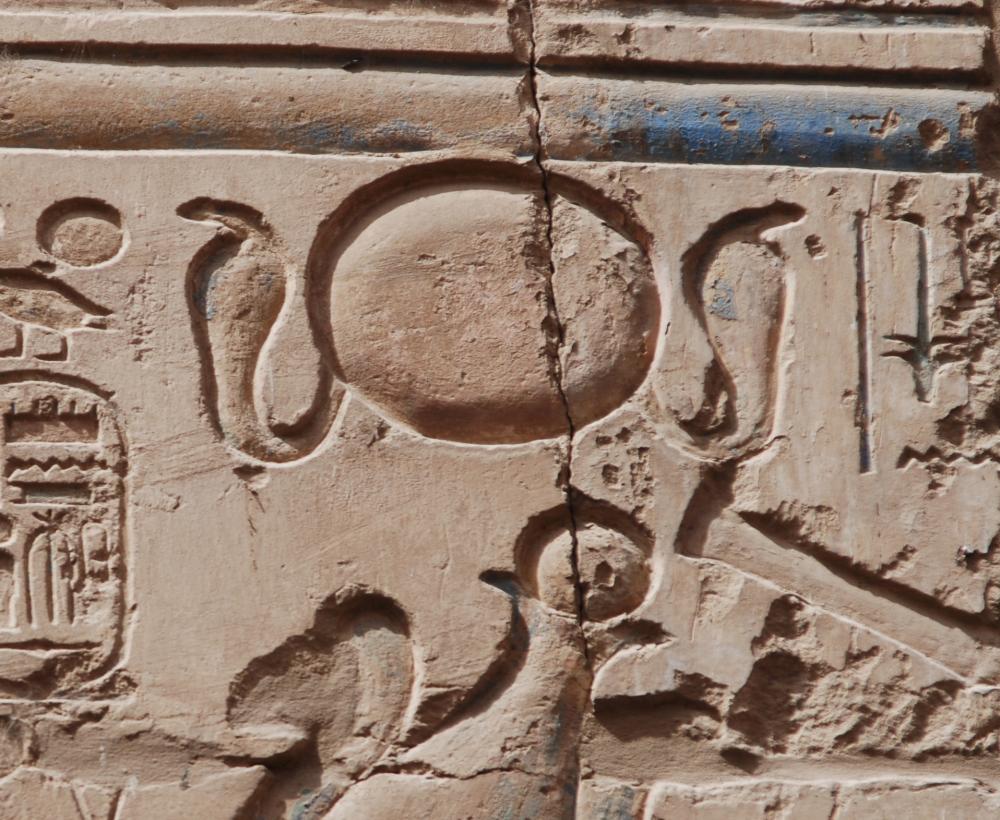 In the upper half of the scene, one finds columns of hieroglyphic texts grouped by theme. Above the pharaoh himself, the texts contain one or more of his five royal names and titles, especially his two cartouche names enclosed within their distinctive ovals and sometimes his Horus name inside a tall rectangular “box” on which a falcon hieroglyph rests. 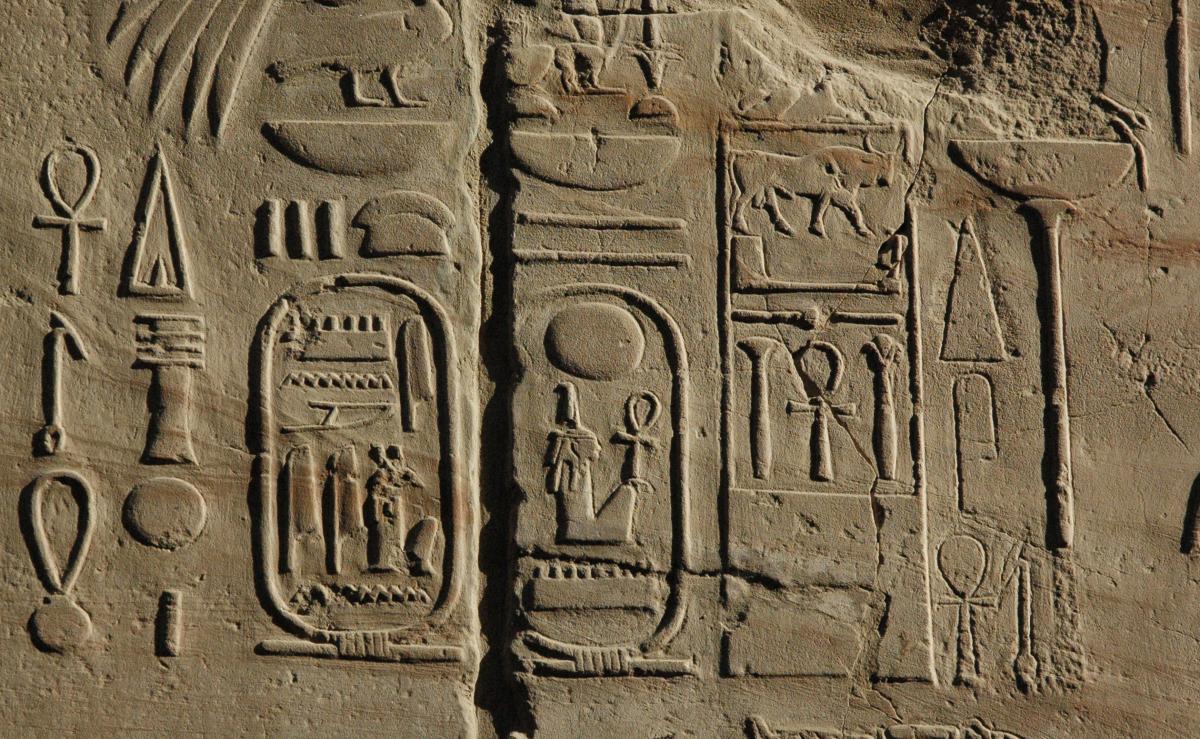 Accompanying texts can also give various other titles and epithets. In most scenes, further texts connected to Pharaoh express wishes for divinely-given benefactions, describing him as one “given life, prosperity and health (etc.)…like the sun god forever.” Behind him might be a column of hieroglyphs expressing a further wish that “every protection of all life, stability and dominion, all health, and all joy might surround him like the sun god.”

A separate text frequently appears in the lower middle part of the scene between the king and god. Called a “label text,” this inscription serves as the title of the scene itself, referring to the king’s ritual act. Label texts announce what the king is doing and for which god. They further assert that he obtain some benefit in exchange for his gift to the deity, such as to be “given life.” Typical examples include:

Above and around the gods and/or goddesses in the scene are hieroglyphic texts bearing their names and epithets, followed by brief speeches in which they confer their blessings on Pharaoh in exchange for his cultic acts on their behalf. Divine speeches frequently begin with the phrase “words spoken” or “words spoken by god N.” Since Egyptian texts lacked punctuation, these formulae are essentially quotation marks but also remind the priest or even the gods themselves to recite these favors aloud. A few of these brief formulaic statements include: 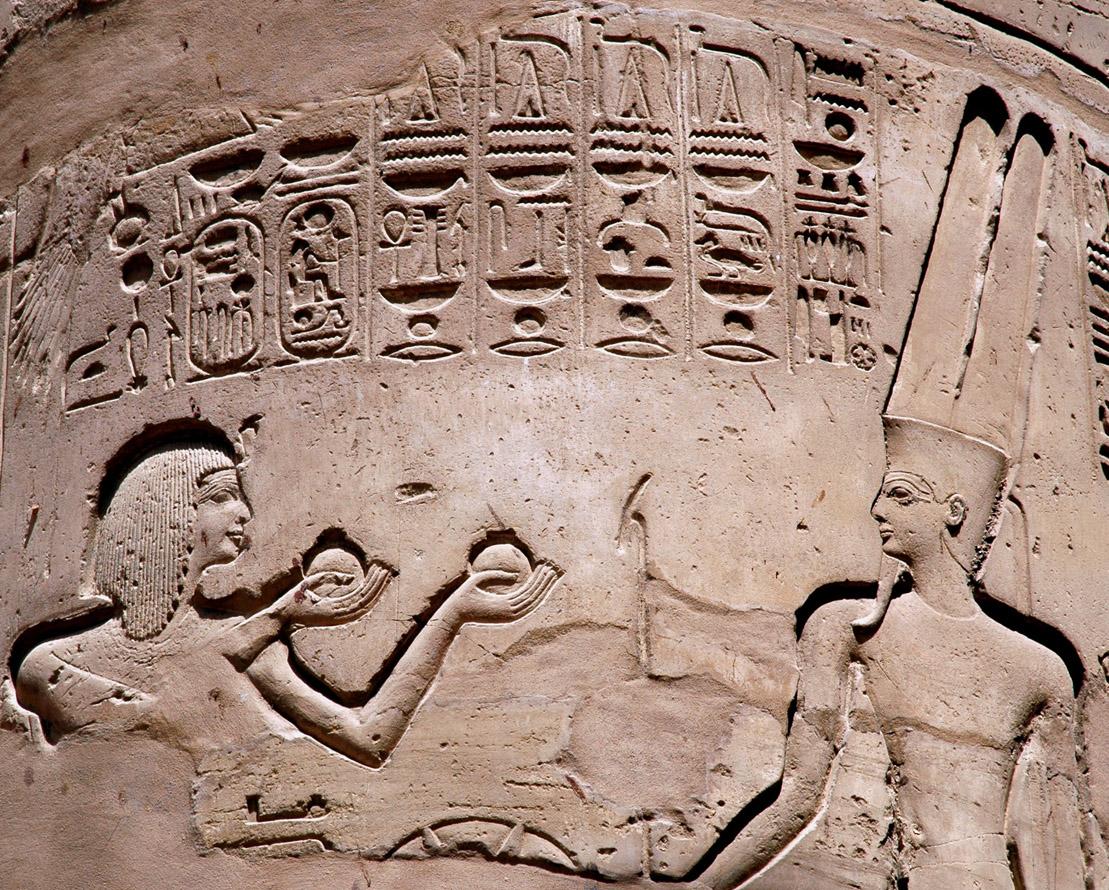 Dozens of other benefactions in countless arrangements appear in divine caption texts throughout in the Great Hypostyle Hall. As wall space allows, both the primary and secondary deities pronounce similar blessings, and columns of texts listing their invocations may be sandwiched between or behind them. In more spacious tableau, the gods give longer, less formulaic speeches. Often praising Pharaoh’s achievements as a builder of temples and for donating rich offerings, they are more effusive—and detailed—in promising him endless blessings for his piety. 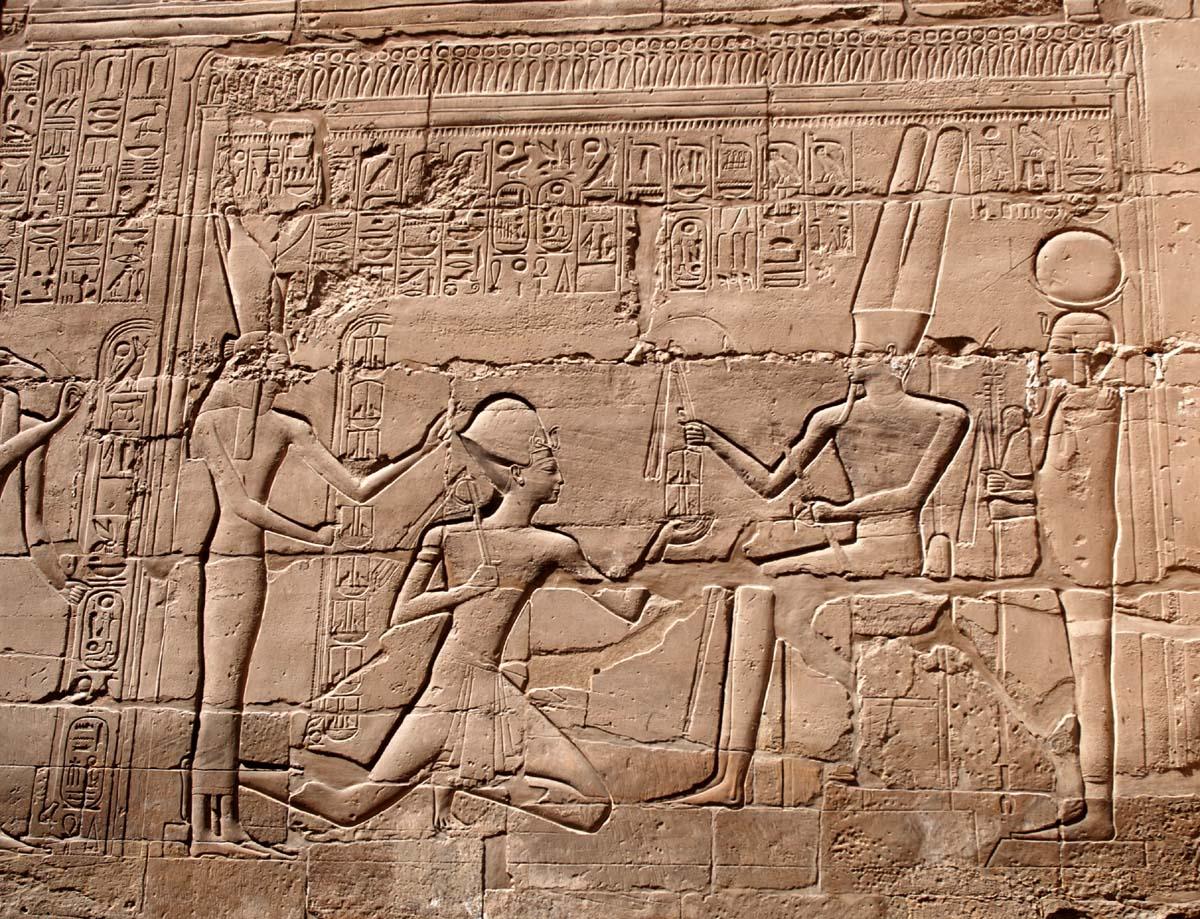 Finally, brief caption texts beside the protective raptor or Behdietite solar disk above Pharaoh feature the god’s name and epithets, often with the phrase “as he/she gives life, prosperity, etc…”