The integration of public schools in Fayette County began approximately 12 years after the United States Supreme Court ruled that separate and equal facilities for Black and white students was inherently unequal and therefore violated the Fourteenth Amendment of the U.S. Constitution. In 1965, John and Viola McFerren, joined by other African Americans, sued the Fayette County Board of Education to integrate Fayette County Schools. John McFerren, Jr., the eldest son of the McFerrens, was the named plaintiff in the class action, John McFerren, Jr. v. Fayette County Board of Education. At first, a graduated plan for integrating schools was implemented. Integration of all grades and schools later followed. To avoid having their children attended integrated schools, many white families sent to children to Fayette Academy, formed in 1965 in response to court-ordered integration, or to similar private schools in neighboring counties. Integration was challenging for African American students. They faced many difficulties: Black students were sometimes bullied by white students, administrators, teachers, and bus drivers. Additionally, Black students found that they had to catch up quickly to the educational standards in the white schools because black schools had not been provided the adequate resources to meet the educational standards expected of white students.

Images from The Cornell Sun.

As found by the U.S. Supreme Court in Brown v. Board of Education, separate but equal schools was a fiction. The reality for most Black students is that they attended schools with inherently inferior resources. Textbooks were often out of date, and hand-me-downs from all-white schools. Moreover, these textbooks featured middle-class white children and families thus ignoring the children and families of African Americans. Below, two African Americans explain the detrimental impact of these textbooks on Black children.

The feature article in the Aug. 25, 1961, issue of the League Link describes some of the first steps to desegregate schools in Fayette County. Click here for a transcript of the article. 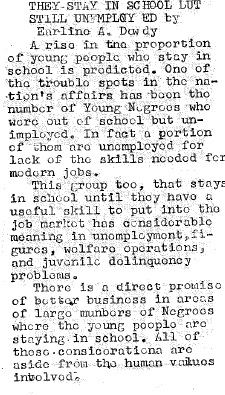