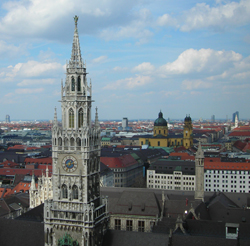 Why would you consider pursuing a minor or even a major in German?

First of all, the historical and current importance of German in the arts, sciences, and global economy is indisputable. German-speakers occupy a prominent place on any list of the world's greatest artists and thinkers, while almost every academic discipline has a strong German tradition, in many cases one that largely defines the field. Here is an abbreviated list of just a few German accomplishments:

• Germany is the most populous country in the EU, and German is the most widely spoken native language in Europe. German is also the third most taught foreign language worldwide and after English the second most popular in Europe and Japan. On the internet, too, German is one of the most-frequently used languages, and '.de' is the world's most widely-used country-specific domain.

• Germany is the world's fourth largest economy and its second largest exporter. German companies have created some 780,000 jobs in the United States, and Germany is the location in Europe with the strongest concentration of American investors, accounting for some 130 billion euros in investment and 800,000 related jobs.

• A study conducted in 2011 by the University of Maryland and the BBC included three German-speaking cities—Zürich, Vienna, and Munich—among the top five cites with the highest quality of life in the world.

• Twelve German, Austrian, or Swiss-German writers have been awarded the Nobel Prize in Literature, the most recently Herta Müller in 2009. A recent New York Times ranking of the ten greatest musical composers featured six Germans and Austrians, with Bach, Beethoven, Mozart, and Schubert occupying the first four positions. Between 2002 and 2009 three German films won Academy Awards for best foreign pictures, and an additional five received nominations. In 2005, Newsweek claimed that Germany was the best of all countries in which to be a creative artist of any kind.

So, what can you do with a German major? A major or a minor in German Studies strives for linguistic and cultural proficiency, which broadens a student's horizons and acumen in innumerable ways. Careers in education and translation are directly linked to language skills, however, a German concentration is also a practical enhancement to a major in many other subjects. Given the importance of Germany in the arts, sciences, and global economy, proficiency in German is an advantage in almost any field. Some current German majors at Memphis are also majoring in art history, biology, business, chemistry, economics, English, French, engineering, Egyptology, international business, international studies, math, music, philosophy, and political science. With an eye to your professional future, proficiency in German will give you a competitive edge on the job market. This is a marketable skill which distinguishes you from your peers and furnishes you with opportunities that do not exist for non-German speakers.

Finally, let us tell you some more about the German Section here at The University of Memphis. In the context of our large, urban university, a concentration in German Studies offers some unusual features. Students not only explore an extraordinarily rich cultural tradition, one that has thoroughly influenced almost every other field of study, but they do so in a very individual and personal setting. We know all our students by name. Many of our innovative courses on German business, translation, film, and contemporary music are directly inspired by conversations with our students. We can offer personalized career advice and assistance in applications for scholarships or post-graduate study. We are happy to design a program of study to suit your individual schedule and needs. We even enjoy meeting our students for a coffee around town just to chat. In sum, we can work together with you in ways that larger programs cannot.

Additionally, we offer study abroad programs in Mainz, Eichstätt, Bremen, and Ulm which normally form a part of a student's course of study. The University of Memphis German Club and the various scholarship and internship opportunities in Germany are also part of the mix.

The German Section at The University of Memphis is a driving program which recently has seen substantial increases in upper division enrollment, i.e. courses for prospective German majors and minors. We, the professors and instructors in the German Section, would be very excited to welcome you to our close-knit community of scholars. Come meet with us to find out more!